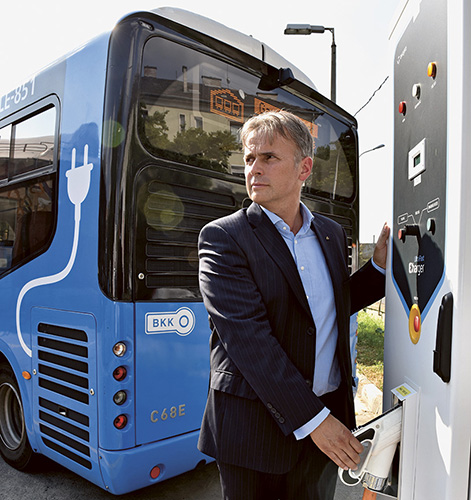 Love what you do and always offer a solution to your customer. As simple as that believes the owner of Evopro-Group.

We never say that something is not possible when a customer has a special request. Hence the slogan of our group: it’s possible. I have never heard of a brick mason or a painter who is short of orders despite working excellently, for such workmen are passed from hand to hand in the city. It works just like that in the world of engineering too. What I am most proud of is that we have always managed to retain our customers once we started to work for them,’ sums up Csaba Mészáros, the executive of evopro-group – explaining how his engineering company has proved globally successful.

Already as a child, the Sopronhorpács-born businessman would make airplane models, was a keen photographer and repaired his own bike. His excellent “leadership” skills soon became obvious, since he organised various contests in the village, including an event when he provided for the accommodation of several dozens children even under rather nomadic conditions.

After his high school years in Győr, Csaba Mészáros went on to study at Budapest University of Technology and Economics and graduated in electrical engineering. Although he originally had teaching ambitions, he also studied mathematics and information technology at ELTE but earned no degree, for a Siemens project in Germany made it impossible to align his job with academic requirements. And that is how Csaba Mészáros ended up working as an entrepreneur instead of teaching. Returning home from Germany, he made his way to East Hungary looking for employment at three different companies (BorsodChem, TVK, Interspan), all of which offered him a position in the field of automation.

Then he was once again attracted by the German market and worked for software company evosoft for a while. When he finally spread his own wings in 2001, he had seven former evosoft colleagues in the starting lineup. Their first major success was related to an airport project in Munich, where they worked with an extended team of 25 professionals. The company continued to grow by similarly impressive leaps and bounds.

‘Our main advantage is that – although we had considerably less money and workforce than others – we have always managed to get a move on much more flexibly, while greatly motivating our colleagues. What really matters is whether you can find a holistic solution to the customer’s issue rather than the black and white letters of the contract,’ explains the executive.

Then the 28th day of February 2014 brought about a major change. Csaba Mészáros sold his service division to Accenture and agreed that he shall not engage in the provision of similar services to any of the world’s 2000 leading companies for a period of three years. ‘I felt particularly proud when the buyer’s regional leader said goodbye to me by telling that – from among many transactions in his life – this was the first one to truly fulfil every word that had been previously agreed on.’ Csaba Mészáros can still recall the buyer’s goodbye notes: ‘I would love to come back three years later and take a look around if there is something for sale’.

The company is now focusing on the world of electronic vehicles. In his younger day, the entrepreneur spent several summers as an intern at Ganz Villamossági Művek (a former electrical company in Hungary) and took great delight in hiking, therefore he has always been inclined to be interested in the world of zero emission. Due to the group’s strategic vertical integration, their range of products and services fully covers all fields of zeroemission transport, including bus stations and filling stations, clearing houses, mobile applications and European integration.

Today, evopro is an able competitor of the industrial giants, but they still have headaches. ‘Sometimes I even have to explain that Hungarian bus production does exist. Also, I find it insulting to argue that our buses have too many foreign parts if we consider this to be a labour-intensive society. Zsolnay is also Hungarian, even if the raw material and the furnace comes from Germany,’ adds the executive.

Csaba Mészáros is aware that a Hungarian company can only achieve major breakthroughs if it is able to collaborate and think together with multinational companies as well. ‘Entering the global market of electric buses all the way from Budapest is almost impossible, but in partnership with large enterprises incumbent on the market we might stand a better chance. We certainly need to identify our own limits and barriers and handle them with a great deal of prudence and humility,’ he says.

The entrepreneur is apparently not afraid of transactions; he has already sold business divisions to the Siemens-owned evosoft, purchased his bus plant from a US private equity firm, what’s more, he bought a bank from Korean engineering firm Hanwha. ‘You always need to be ready for partnership. In fact, we have not had any activity this far which would have demanded considerable external financing or a listing. However, our current zero-emission solutions may be one of those,’ the executive said.