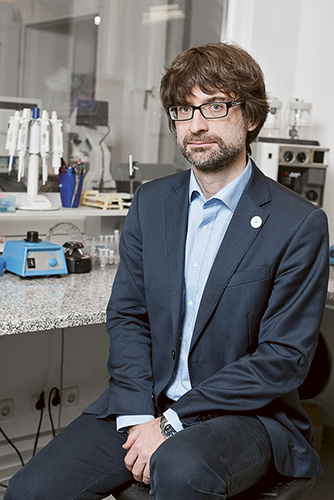 The era of mathematical oncology has dawned - claims István Peták, the co-founder of Oncompass Kft.

It all began with the common passion of two doctors, István Peták and Richárd Schwab, who, after graduating from university, went on dealing with molecular diagnostics and pharmaceutical research abroad. What they were much bothered about is the question: how is it possible to tell whether or not a tumour is sensitive to a specific drug? They came up with the idea of a joint venture in 2003, already in Budapest. This was the year when the Human Genome Project was finished, unveiling the human DNA map. Science has thus found a pattern which the DNA sequence inherent in tumours could be compared to. Relying on this, researchers could systematically examine what genes and which gene mutations are responsible for the occurrence of tumours. Pharmacological companies started development at a spanking pace.

The scientists decided that they would develop and supply diagnostic methods which are suited to forecast the effects of medicinal products on diseased people, thereby facilitating the application of fully personalised treatments. Several hundred genes may cause tumours, which means that the chance of treating a patient with the proper medication is only a few percent. However, if personalised diagnostics finds out which gene is responsible for the tumour, the prescribed medication may be more effective. The company soon made it to the top of the industry and competes today with the largest US diagnostics centres.

The first couple of years of operation were dedicated to research and development. What brought about the growth of the business was the marketing authorisation of the first drugs for genetic defects and their being funded by the government. At that time, Oncompass was the only laboratory in the region that was able to offer such diagnostic tests, and they were used by pharmaceutical companies for these duties. This period went on until 2012, marked by an ever increasing turnover. The partners could wisely foresee that the market launch of such medicinal products in increasing volumes will turn the business model around: in the treatment of cancerous diseases the focus will shift to the patient rather than the medications. Therefore, the company embarked upon the development of technologies which allow for the examination of several genes at the same time. Analysing the results and ranking the various options of treatment brought the issue of information technology to the forefront. It was then that venture capital fund PortfoLion acquired a stake in the enterprise, providing sufficient financial means for the expansion of the business in the surrounding countries as well as in Switzerland and in the United States.

The company provides a complex solution: they extract DNA from the sample of a cancer patient, they define the incumbent gene sequence and then they process it by way of specific methods of bi oinformatics. Subsequently, an expert team consults the patient’s doctor in charge about possible treatment options. The company keeps track of the disease for 5 years, by the end of which period a patient is declared completely cured if free of symptoms. The revenue derived from this service has been continuously increasing.

According to the company’s plans, the next stage of growth will see a global expansion. To that end, they aspire to establish a franchise network around the world. In recent years, they have developed an IT platform which has already been patented in the United States. Due to the enormous expenditure necessary for the development of this technology, the company generated losses last year after two profitable years, but they expect a positive EBITDA for this year. The software standardises the field of precision oncology. The patient can register, select a doctor and the doctor chooses a diagnostic method for the patient. Results are analysed by the bioinformatics system, while continuously providing real-time information to both the patient and the doctor. For example, if it turns out that a genetic defect has been successfully treated by any medication, then the system immediately sends a notification thereof. The system connects patients, doctors, diagnostics and data bases. The product has been registered as a medical tool within the EU. After scalpels and phonendoscope finally a software may be considered a medical tool as well. Human genome comprises 25 thousand genes, out of which 600 are somehow related to tumours and then there is another 3 million mutations plus combinations and variations thereof. Immense numbers. Yet, they are finite, for several million years have to pass for a new gene to form.

Good news that these dimensions cause no problem for an IT professional using a computer. Welcome to the era of mathematical oncology.