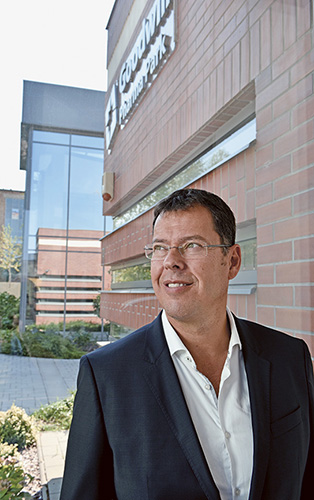 Starting out as a labour intermediary back in the nineties, the Hungarian pharmaceutical company is now also aspiring to spread its wings at an international level.

Barely two decades ago Goodwill Pharma set out in the business of pharmacological headhunting. Today, the company sells various products including their well-known Szent-Györgyi brand vitamin C. The company’s story began in 1997 in the city of Szeged where Nobellaureate Albert Szent-Györgyi discovered vitamin C. It was then that Ferenc Jójárt, the founding CEO of the company, realised that the domestic pharmacological sector was in great need of improvement in terms of sales activity. The professional already had a sound medical background: he had worked as an ear, nose and throat specialist in hospital and at the university clinic, he had served as a general practitioner and he had been employed by a multinational company specialising in the same ﬁeld. In the mid-nineties, pharmaceutical sales representation could be carried out only by professionals with a degree in medicine or pharmacology, consequently the industry suffered from a noticeable scarcity of labour. This provided exactly the opportunity Goodwill Pharma was to capitalise on. The company soon ended up recruiting fully ﬂ edged sales teams for key accounts, namely the big pharma companies in the domestic market. Within the course of this labour market intermediation, the company made contact with an increasing number of multinational companies which had no representation in Hungary at that time. Spotting a new opportunity, the company’s management sought to extend their partnership with these enterprises by contracting for the distribution of speciﬁc products or even for the full domestic representation of their business.

Goodwill agreed with its customers that it would be entitled to a commission based on the turnover growth of the products concerned. This business model worked out, perhaps too well, because such distribution contracts came to an end after a term of 2-5 years; the partners lost interest in renewing them as their revenues grew to such an extent that they could afford to establish their own representations. Although the business was successful, management found it difﬁcult to plan for the long term under such circumstances. Goodwill was way too reliant on its partners. Therefore the company decided to make another step forward and embark upon distributing its own pharmaceuticals. The global economy crisis actually gave a boost to this change because the crunch made partnering organisations call a halt, resulting in the slow-down of the company’s previously dynamic growth.

In 2010 the company launched its ﬁ rst self-developed products to the market. ‘We purchased licences for generic medicinal products and made them “go goodwill”,’ says the CEO brieﬂy of the business recipe. The development and the obtaining of authorisation to market the products is typically made by the company, as are logistics and sales, whereas the manufacture is mostly outsourced to several places in the world. The group has, within the course of ﬁ ve-six years, created a comprehensive product portfolio with 40-50 brands which include prescription and non-prescription drugs, dietary supplements and feeds for special medical purposes.

In the meantime, the group has also ventured outside Hungary. For several years now a Serbian company has been in operation under the same name, which is owned by the Hungarian Goodwill as its majority owner. What the company has in mind for the foreseeable future is to start the distribution of self-developed products in the Czech Republic and in Slovakia, while entering the Austrian and German markets via online sales. The development of production is among their not too distant plans as well. ‘At present, we look like an upside-down drug company that is we are engaged in all key activities except for production. In fact, we already have a small facility producing dietary supplements, but we intend to develop in this respect too, perhaps by the acquisition of a small business,’ sums up Ferenc Jójárt.