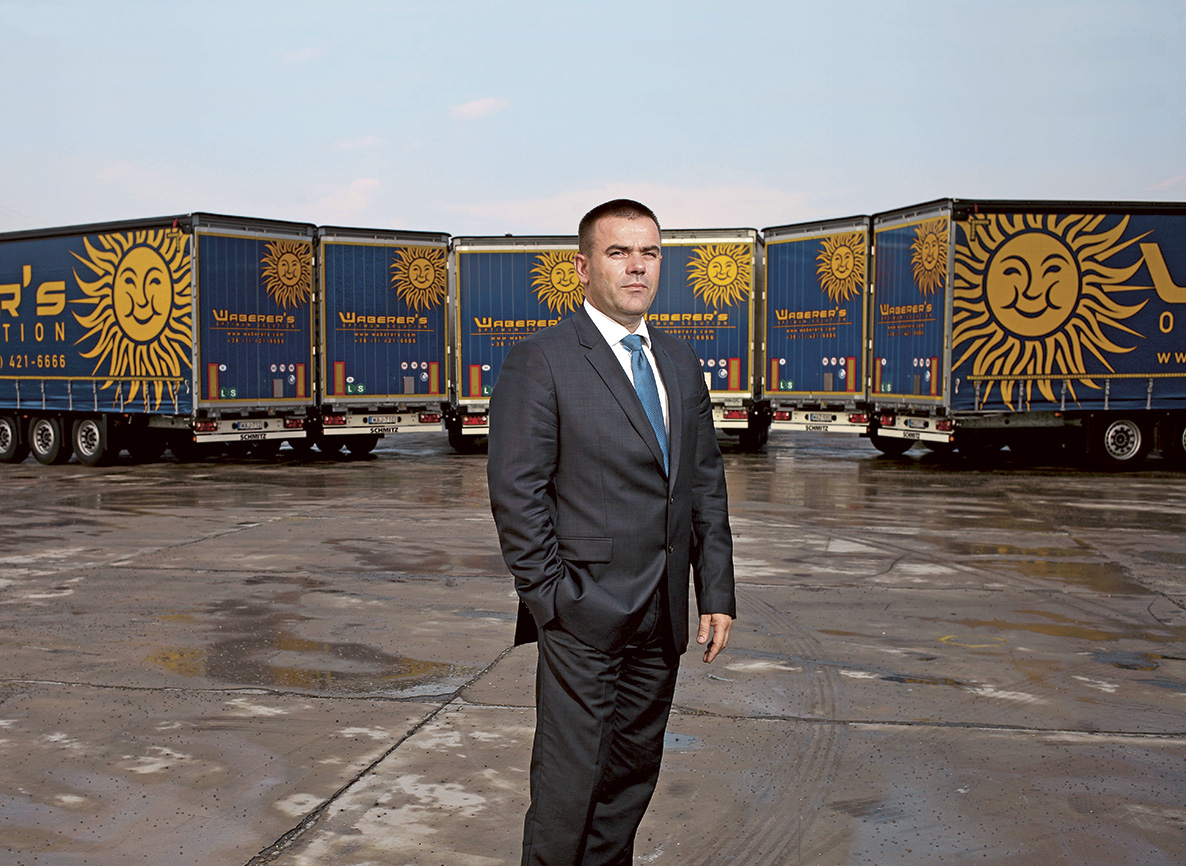 New CEO of haulage and logistics company seeks faster growth and a more balanced portfolio, while considering a possible listing.

The only way to get Mediterranean fruits in the small town of Bodoglár in the Kiskunság was from under the counter, so when his godfather – who worked at Hungarocamion – brought home a bag of tangerines after a trip in Jordan, Ferenc Lajkó decided as a small child that he will be a lorry driver. But his relative tried to convince him to go to college and approach this job from clerkly point of view. And so he did, and maybe he would have never left for another had he not been assigned as a controller at Hungarocamion. But he wanted to deal with transport organisation, so he left the company. He would not have thought that he was to return a few years later: his employer, Volán Tefu acquired Hungarocamion at the end of 2002. This was when his prior experience came in handy: he contributed to the smooth merger of the two firms.

He shortly became responsible for market sales in the BENELUX countries, which was his first executive position. In 2007, he became vice-president of the company, which was already called Waberer’s at that time. Later on, forwarding was also assigned to him. The groups’s leader, György Wáberer, who sold all his shares and left his position as CEO this summer, granted him much room for control, so he was duly authorised to make decisions in an increasing number of issues. In the meantime, he learned a lot from the legendary leader: for example, that it is worth setting forward-looking goals and keep to them, even if they seem dif ficult to realise at the moment but which elevate the group to higher heights. The aforementioned merger was one of these goals.

He never got bored with his job as the company evolved so dynamically that it almost looked like a different firm year after year. Now that he is the number one leader, he wants to meet these standards. The group has grown by an average rate of 10-12 percent over the last six years. Ferenc Lajkó along with the current majority owner Mid Europa Partners, a venture capital fund, would like to facilitate and promote this tendency. This is a minimum standard. They obviously require the highest possibly speed, which is only possible by means of acquisitions. Their strategic goal is expansion beyond borders; in relation to several enterprises, the process has proceeded to the stage of due diligence, so a bid and an announcement can be expected in the near future. ‘Both the company and I have prior experience in domestic acquisitions, but it is now a special challenge for us to be successful abroad in this field,’ says the CEO of Waberer’s International Zrt.

Not only does it serve the reinforcement of the forwarding division, which has been thus far considered as more of a basic activity, but Ferenc Lajkó also wants to increase the share of international forwarding and logistics services (carried out by means of non-proprietary equipment) within the group’s scope of activities. With the latter, they want to enter regional markets, whether by acquisitions or by following their domestic customers. The CEO believes that a more sustainable growth path and a more balanced, more lucrative portfolio may be achieved by blending these three activities. Since increase in profit is at least that important as increase in growth, if not more important. In fact, the goal is to ensure that profit evolves even more dynamically, which could indicate that the company is capable of improving on efficiency too. This is not intended to be done primarily by cutting expenses, but rather by technological investments. For instance, he would develop the telematics systems of the lorries, so that they could save up to half or one litre of fuel in a hundred kilometres. ‘We have identified various projects which can improve our efficiency and profit in the next 10 years,’ says Ferenc Lajkó.

This requirement of the owner is largely due to the fact that Mid Europa Partners wants to introduce the company’s shares to the Budapest Stock Exchange. Thus the management has to keep the company ready for a listing at all times such that, when the circumstances are favourable, they could enter the market as fast and smooth as possible. ‘We have tried to enter the stock market twice, and we got very close to it last time. I enjoyed this job a lot and I really want to see the outcomes,’ emphasises the CEO. Who, by the way, does not make it a secret that this new task is a bit more than he is prepared for, but nevertheless, he is ready for the challenge and he is sure that he will succeed, just as he always did before.