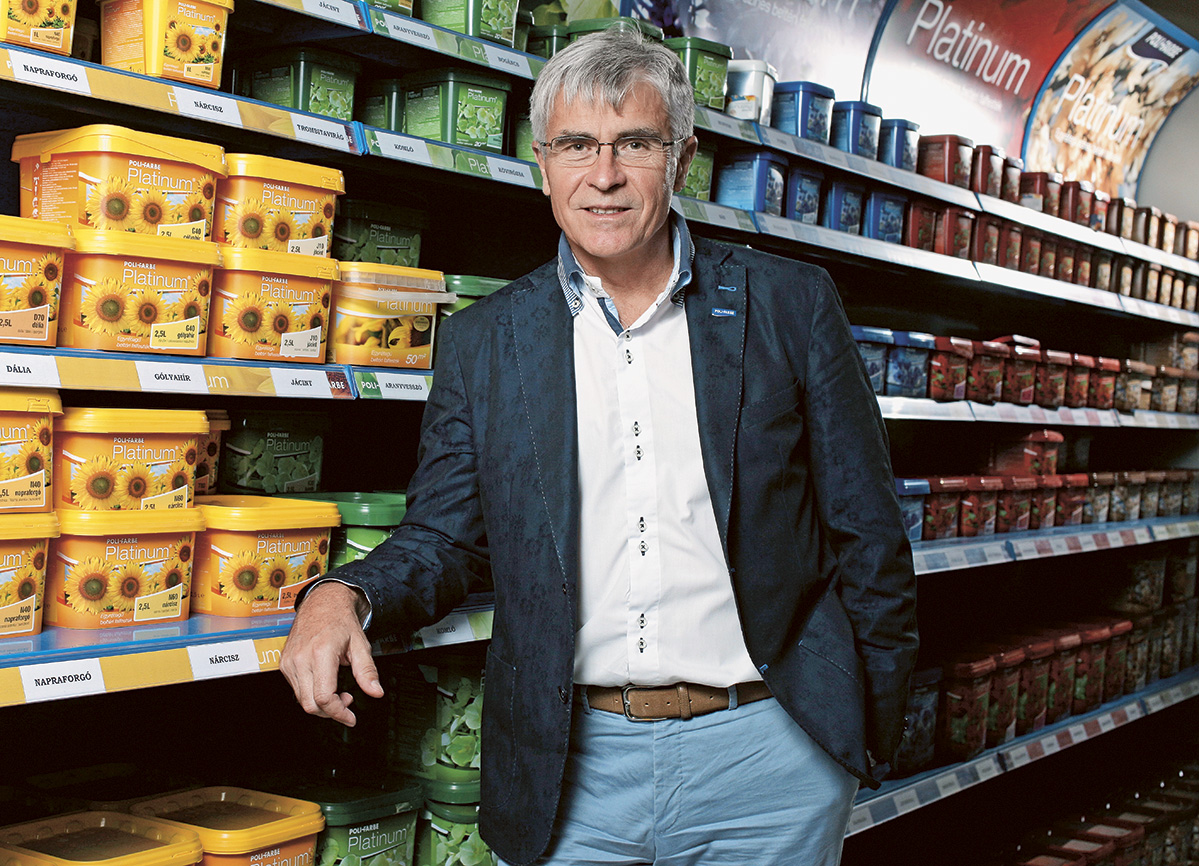 Taking advantage of the biggest opportunity in his life, Antal Szabó has built up Hungary’s leading paint manufacturer.

The story of Hungary’s largest paint and plaster manufacturer began like a fairy tale. Shortly after the Pan-European Picnic on the 19th of August 1989, Antal Szabó was asked by an acquaintance of his to take him to a friend in Southern Bavaria, to a small town called Waldkraiburg.

That is where he met that Bavarian gentleman who changed his life for good. ‘For letting East Germans pass the border, I will help a Hungarian out,’ he recalls the words of the Bavarian man, which were uttered in the cafeteria of a monastery, in the company of a few beers.

Antal Szabó was leading the box factory of the agricultural cooperative on Bócsa at that time. He knew that the old system was over, and if he does not start something self-employed, he does not have a chance in the new system. At the age of 28 and as a father of 3 children, he wanted to act adamantly. Like many others, he considered the sale of used cars, but the Bavarian man dissuaded him, saying: “Don’t be silly, leave cars to them and start making paint!” ‘He was not the first Hungarian to have received the Bavarian man’s offer, but the first one to accept it,’ says Antal Szabó, adding that besides his courage and dedication, it was his complete lack of knowledge of the sector and his naivety that made him say yes to the offer.

The company started off in January 1990 in Bócsa. The founder had already enrolled in a vocational academy for entrepreneurs, launched by OTP Bank. This knowledge helped him at the first steps and also at maintaining the box production, which he quasi-privatised from the cooperative, and provided most of the starting capital for the company. In the following 15 years, Poli-Farbe Kft. and its activities evolved step by step. The 20 tons of paint sold in the first year of operation has increased to 6,000 tons by 2004, producing a revenue of slightly more than 2 billion forints in that year. From the next year on, development began in the lab and also in the field of marketing, yielding products that have made the company extremely profitable ever since. Last year, having sold nearly 43 thousand tons of products, roughly covering 50 percent of the Hungarian market, the revenue of Poli-Farbe Kft. has surpassed 10 billion forints.

In view of logistics, the town of Bócsa, with a population of 2000, is a highly favourable location. The network of clientele, consisting of about 1200 customers (mainly retailers) can be served easily. Kisvárda is just as near as Szombathely. Finding properly trained workforce is a harder task; nowadays the company trains its own chemical technicians, 10 people at the moment. The company, relying on an organisational structure of 3 to 4 grades and around 250 employees, has retained its nature as a family business.

‘The essence of our job is not just supplying people with paint, it is supplying them with paint they actually need,’ draws up the founder the mission of the firm. With about 4 to 5 people at every point of sale, the company maintains contact with about 5,000 salesmen, who give valuable information about customer feedback and demand. This network of information made them realise that about 60-70 percent of people wish to do the painting work for themselves. After a period of thorough planning and development, in 2005 they released their brand new one-layer paint Poli-Farbe Platinum, with which any ordinary man can work precisely.

The company has already received 8 Hungarian Product Awards, implying its prominent position on the market. However, Antal Szabó reveals his philosophy with a quote from Sándor Márai: “Remain human, without titles, without prizes”. He considers human resources to be the most valuable assets, and he is grateful that he has several colleagues who are willing to build the enterprise consistently. Instead of short-term profit maximisation, he plans for the long run. Until 2004 he did not take any dividend, and ever since he has been resolute to leave the profit in the company, trying to make use of it in a most prudent manner. Poli-Farbe Kft. now focuses on a fairly small segment of the chemical industry, yet there are several areas closely related with paint manufacturing that provide a world of potentials. A number of plans are on his table already, waiting for the moment to come.