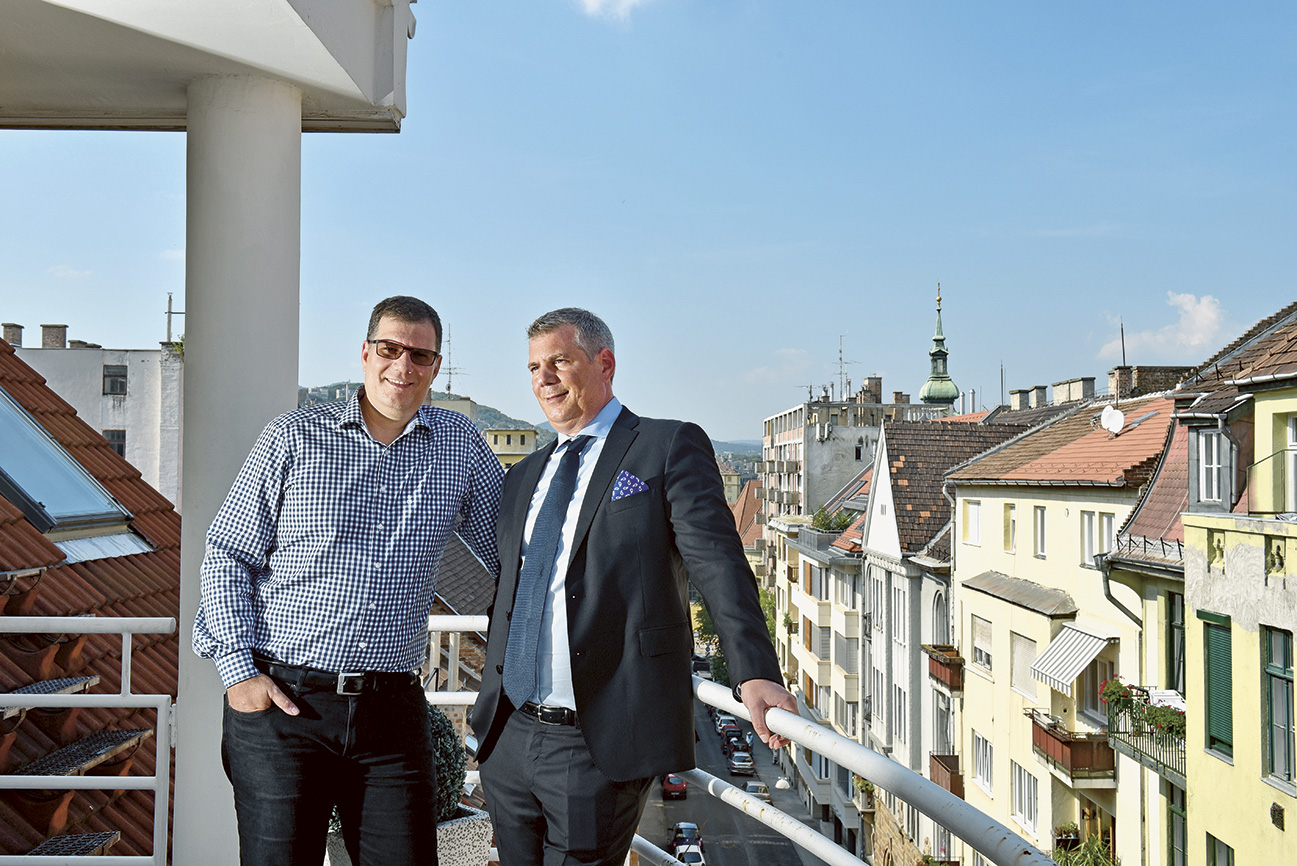 Hungary’s leading real estate company is constantly growing. There is no stopping. No matter how saturated the domestic market is, they keep coming up with new ideas: new services, international expansion.

‘Our kick-off was a matter of chance, but after that nothing ever happened by accident in the company,’ recalled Guy and Doron Dymschiz, the owners of Duna House Holding Nyrt. The Germany-born brothers ﬁrst came to Budapest at the time of Hungary’s big housing boom in order to assist foreign investors with favourable targets. Then, in the early 2000s, the international hype came to an end. This was a moment of choice for the Dymschiz brothers but they decided to stay, for they believed that a strong brokerage network was missing from the Hungarian market. So they embarked upon building their franchise. Duna House ofﬁcially started operations in 2003 and from then on the company has been continuously developing. Their first branch was soon followed by further ofﬁces in the capital. At ﬁrst, insiders could open their own ofﬁces, but later on also external partners were admitted into the franchise. At the beginning, the business covered most of Budapest and then they continued to launch agencies in the countryside as well.

Following this growth of locations, the company shortly extended its range of services too. The business started to provide auxiliary services including property management for foreign investors, brokering ﬁnancial instruments (residential mortgage loans), issuing energy certiﬁcates, real estate appraisal – they always had something new to offer, hence their portfolio kept growing. Although the ﬁnancial and credit crunch in the years following 2008 inﬂicted a major setback on the real estate brokerage segment, also impairing the group’s proﬁtability, their growth remained entirely uninterrupted. The idea of international expansion crossed their minds pretty soon. International growth began with the opening of a single branch in Prague, then the group acquired the market-leading Polish franchise network, becoming a regional player. ‘Despite all the differences between the markets, we reckon that the operations have much more in common than what distinguishes them. The Polish network is wrestling with problems for which we have already found proper solutions in Hungary. Therefore, we expect our Polish business to perform well,’ said Doron and Guy Dymschiz.

But what is so special about Duna House’s know-how? Why is it worth carrying on business on the international stage? The brothers deem it important that all measures need to be thoroughly thought through, but once the company is headed for a target, it is advisable to be consistent in its realisation. ‘If you try something new, you’re bound to make mistakes, but it is another thing to keep making them. We never follow suit, instead we care about our own performance – whether there is room for improvement or innovation. Think big, and build a good team. Most of our leaders have been working at the company for 8-10 years,’ that is how they outline the factors of success.

They still have a lot in mind. Duna House Nyrt. sought a listing on the Budapest Stock Exchange already in 2015, but the regulatory environment underwent a major change just before the scheduled IPO. The government phased in a 2 percent cap on broker’s commission, thereby curtailing the sales potential of a key division out of the blue. Yet the company did not give up, re-adjusted the model, and ﬁnally managed to make this division proﬁtable as well.

Apart from that, the company is still in need of capital funds, for they aspire to grow both horizontally and vertically. Their new brand “Smart ingatlan” (i.e. Smart property) has reached 30 ofﬁces, but their own ofﬁce segment could also fuel growth, and the company has established a real estate investment division too. The group has also engaged a partner to purchase four properties, which are used for the development of 400 ﬂ ats as part of a project referred to as MyCity. ‘We have no intention of transforming the company into a real estate investor,’ explain the founders, but the 5-percent VAT rate and the housing allowance freshly available for families make it an attractive business. The group has also launched Impact Alapkezelő Zrt. which is in charge of the management of the ﬁrst Hungarian housing fund. Today’s low yield environment may very well encourage the growth of the domestic real estate fund market currently amounting to 600 billion forints. ‘This is a ﬁnancial product which could be a perfect substitute for real investments,’ add the Dymschiz brothers with an excellent Hungarian proﬁciency. They may be regarded as Hungarian businessmen by now. But how do they like it in Hungary? – the question might arise.

‘We have been living here since 2000, Budapest is the centre of our lives, we have got Hungarian wives and our children were born here. Do we need to further explain our attachment to the country?’ – they reply with a laugh.