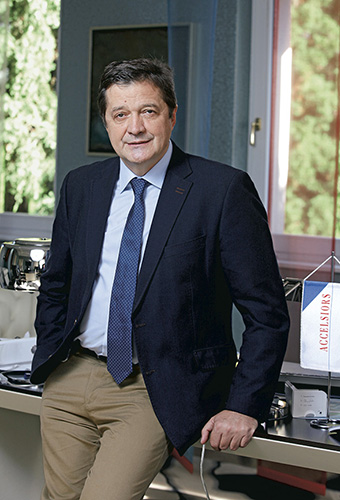 There are people who like to talk about knowledge-based economy, and there are those who live it. And that in a most difficult sector such as clinical research management.

Mihály Juhász graduated as a Hungarian doctor in Vojvodina when the Balkan War broke out. He did not wait to be called upon for a second time to serve on the frontline. In 1993, he decided with his wife to move to Hungary and make a new start – with their pockets empty. The professional with clinical background sought employment as a doctor, all in vain. Finally, he was offered several positions at large pharmaceutical companies: last he was employed by Novartis, as medical director of the department of biology, until 2002.

It was then that he decided to set out on his own. He established his own business under the name Accelsiors Kft. now billing over 23 million euros per annum, employing 220 people and operating 17 offices on four continents. The company is engaged in the management of clinical research commissioned by drug manufacturers. Research activities related to the development of pharmaceuticals require a great deal of knowledge-intensive and elaborately regulated work. Their duties are generally consist of organising and managing clinical examinations, supervising processes, managing data as well as submitting final reports to the client.

Key accounts of Accelsiors mostly include US drug manufacturers. The United States is the most dynamic and most affluent market, where a great number of such companies operate. 60 percent of all orders are received by Accelsiors from this region. European clients have a share of 30 percent of revenues, while customers from Canada and South Korea contribute 5 percent, respectively.

There are giants in this space, too. Accelsiors belongs to the small- and medium-sized category. Smaller companies, if not contracted to the above, can ultimately make their fortune with their own pool of knowledge and experience. Accelsiors is directly contracted by drug companies leaving no room for mistakes, but at the same time it appears to be in a much safer financial position than that of subcontractors. A study might as well take years – depending on the type of disease. The best team of experts, pharmacologists, statisticians and IT professionals are required to collect and analyse data.

Clinical studies have to be conducted within a highly complex licensing system, which requires not only the fulfilment of sector-relevant standards but also the due consideration of ethics. This is shaky ground in financial terms as well: companies in charge of clinical studies must have proper liability insurance in place. The financial crisis had its impact on the business by around 2009-2010 causing considerable financial losses to Accelsiors as well. As a consequence, the company realised that its customer portfolio needs to be diversified. Cycles are likely to occur regardless of the crisis, predominantly shattering the earnings of smaller companies. Size may bring about stability, and Accelsiors has therefore targeted quite an impressive revenue performance.

Mihály Juhász lives out of a suitcase; he is constantly on the go, opening new markets. He is presently focused on India: the region is just as troublesome as is promising. The earnings are fully declared in Hungary and taxed properly. ‘Our profession had better remain free of all the wheeling and dealing – this job requires the highest level of transparency,’ he says rather distinctly.As this activity demands the highest standards of professionalism, Accelsiors is continuously looking for well-trained and talented people. Their recruitment activity is by far not limited to Europe, they keep hiring from around the world. With the help of a computer an

employee can work from any given spot, but Mihály Juhász prefers maintaining a more personal touch with their colleagues. Professionals from the United States or India are, however, hard to attract to Budapest for a longer period of time. Nevertheless, the company makes sufficient profits ensuring the implementation of developments as well as the opening of foreign offices by way of reinvesting the earnings. Since its foundation the company has resorted to no bank financing at all.

Mihály Juhász seeks to multiply revenues within the course of five years. For that purpose, the acquisition of a couple of small firms – primarily of Asian origin – will be inevitable. Once this objective is reached, he will contemplate the company’s future. ‘Still, Accelsiors will have grown so large by then that its name must not vanish without a trace,’ the founding partner adds. If they carry on like that, the company will surely reach that objective