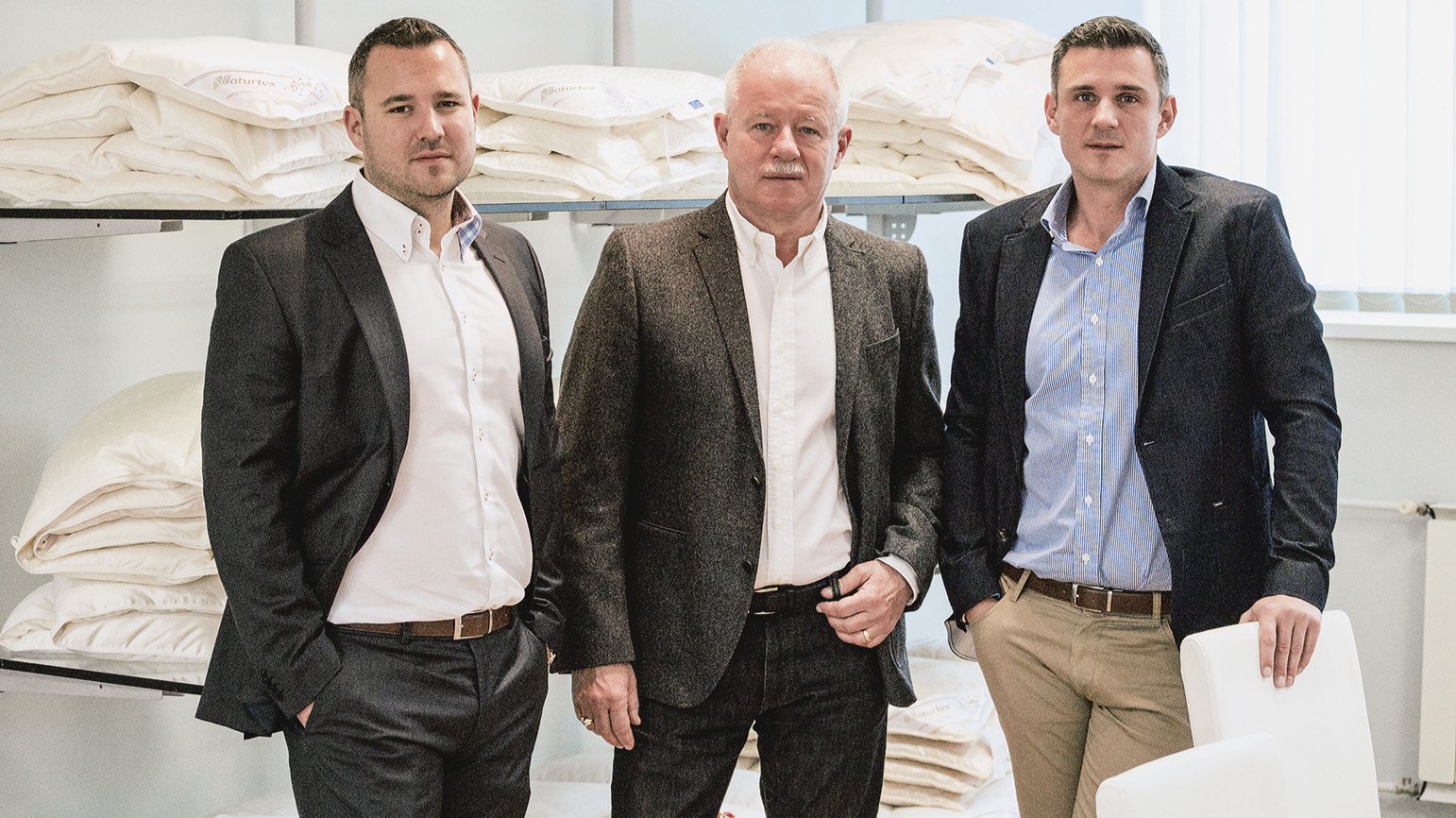 The Szeged-based family business is soon to make it to the top of European home fabric firms. With another leap forward they are set to catch up with the best-known names in the sector.

The founding father, dr. Ákos Gellért, got into the feather business in 1983 when he was elected as managing director of a Hungaro-Austrian company. The enterprise was so much of a novelty that his company was the third one to operate in the Southern Hungarian region. He must have done something right, because in 1983 the then market leading German company offered him to take over the management of one of the group’s local subsidiaries. Before moving to Germany with his family, he and two Hungarian partners decided to set up Naturtex Kft. in order to have a business to return to in case things do not work out well. In the meantime, the German group also invested into the Hungarian company, primarily using it for contract work and market development.

The German company carried out an impressive improvement, and dr. Ákos Gellért was willing to join as a partner; however, the Germans did not like the idea. As the children were also slowly growing up, the family decided to come back home. At first, the founder was more interested in real estate than his original business, so Naturtex was operated by the Hungarian management. And then came a day when the German partner made an astonishingly low purchase price offer for the founder’s stake. In fact, it was not until that time that it crossed Ákos Gellért’s mind: if the company is valued so low, what if he buys out the German partner instead? They eventually closed the deal and the company, after the exit of several small shareholders, came to be wholly owned by the Gellért family.

The firm produces the widest range of home textile products, comprising a total of 500 wares. It supplies retail chains, under private label brands, they also sell an increasing volume of products under the high-quality brand Naturtex, representing 70 percent of their turnover by now. Naturtex is one of the market leaders in Hungary, currently exporting to as many as 40 countries.

The three facilities, all of them being individual profit centres, carry out three activities: the first one produces artificial and natural fabric supplying both the domestic market as well as the markets of the CEE region. Most of the turnover derives from small retail chains but they are major suppliers to the hotel industry too. This accounts for roughly a fifth of all sales. Their second division is one of Europe’s most state-of-the-art plants run by Balázs Gellért: this is where all the fluffy and feathery end products come from, 90 percent earmarked for export. This represents a share of 40-45 percent in their turnover. The third plant is the production site for down and feather fills; a certain part of them is finished product, another part being semi-finished product. All the output goes directly for export, contributing 35-40 percent to the turnover.

Hungarian goose down feather is considered world-class quality. By ensuring integrated operations in its production, Naturtex enjoys yet another competitive advantage on the Western European markets. Thanks to integration, they are able to check quality in every stage of production. Over the last 10 years, the company’s sales revenue jumped from 1.5 to 7 billion forints; their largest annual growth thus far peaking at 40 percent. This posed a major challenge and the owners finally decided that the foundations of Naturtex need to be strengthened. They set a period of two years to reconsider and realign their strategy. This – together with periodic downturns in the global feather price – is reflected by this year’s figures. They expect to kick-start the coming year with more solid ground. Preparatory activities seem to yield fruitful results on several export markets.

Largely due to funds granted by the European Union, they have renewed their equipment and replaced the 30-to-40-year-old machinery. However, their equity of 2.5 billion forints would not have been sufficient to finance capex and boost sales, anyway. They operate with substantial bank financing facility of 1.5 billion forints. ‘We seek to negotiate interest rates which are fixed for a long term, for we are afraid that the current level will not survive for long,’ says Ákos Gellért, one of the brothers who is in charge of the domestic market and auxiliary activities. For the time being, they have no other financing options in mind. What they find increasingly difficult to combat is labour shortage. Talented young people who speak foreign languages are inclined to move to Budapest, if not further to Germany or England. At the very moment when Naturtex, employing 150 people, is just facing another upswing.