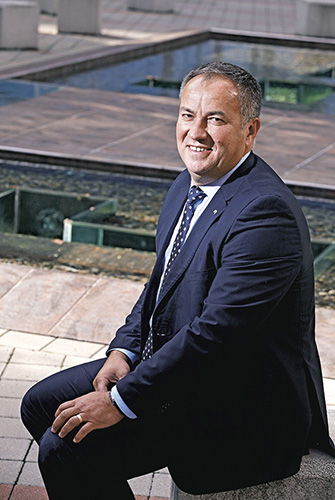 Szabadics Zrt., dealing with structural and civil engineering of public utilities, prepared for the expansion of activities already during the years of recession. Thanks to their forethought, they managed to double their profit after the crisis.

As soon as the democratic transformation took place in Hungary, József Szabadics immediately left his position as master builder at the water association of Kis-balatoni Vízi Társulat. He knew he gave up a secure livelihood but he wanted to leave the public sector to create and build his own notions. He was not even bothered when he had to use a barely working, used Polish machine for civil engineering work. Since he worked for himself, he could set rules and standards, which guaranteed quality work and which were thus far not present in the Hungarian building industry. Only a few years after establishing the firm, Szabadics enacted a policy providing for that every machine which was older than four years, whether a lorry or a grabber, had to be immediately changed.

‘They say alligators could survive all these millions of years because they could always adapt to their environment. This strategy worked out for us too: with the constant renewal of our machinery and the constant follow-up on market demands, we could always stay afloat,’ says Tamás Kovács, the current leader of Szabadics Zrt.

Of course, there are things that you cannot be prepared for, not even with prudence and careful planning: when the financial crisis crashed the economy, Szabadics preferred to swallow the pill as soon as possible. Typically, they were so fast in addressing the issues arising, that when the crisis was still peaking, the company’s main concern was how to extend its profile: that is how they launched the construction of flood protection systems as a new service. Having entered this new area only recently, they were the ones to work on the embankment construction at the river Drava as well as the flood protection works in Komárom. When they saw that the tap water systems, which were developed in the sixties and seventies, were being upgraded, they chose to enter this segment too.

Since they became a most prominent player in the field of utility works and civil engineering in Western Hungary, after the crisis, they experienced an explosive growth in the post-crisis period: by 2014 their sales revenue increased by 11 billion forints as compared to previous year. Recently, they participated in the revitalisation of Szigetköz, and in various projects improving the quality of drinking water in Zalaegerszeg and Szigetvár. They realised 46 projects only last year. They spend most of the revenue from these works on new machinery: they have just bought a modern dredge, which will be used for cleaning lakebeds and riverbeds.

The company is facing new challenges right now, since the somewhat delayed launch of EU-funded projects is likely to entail a massive decrease in revenues by 2016. Still, they proudly endeavour, even in these troubled times, to keep their staff in place, which they regard as the most valuable asset of the company. For they know that obstacles of the future can only be tackled by a dedicated team of experts.