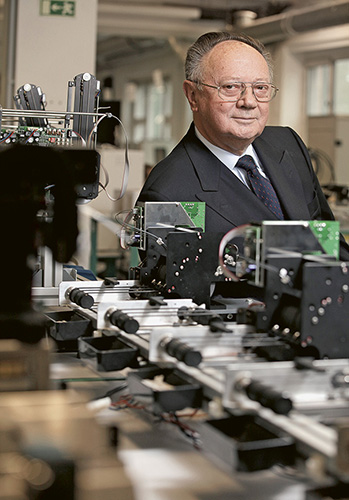 The family-owned company is continuously developing its blood and urine diagnostic equipment. 77 Elektronika currently exports to 91 countries, but they keep coming up with new ideas. There are many offers, however the owners have no exit intention at all.

The story of 77 Elektronika Kft. dates back to 1986. The company had sales revenue of 600 thousand forints in its first business year, which will be somewhere around 26 billion this year – explains Sándor Zettwitz who leads the family business together with his daughter, Gabriella. This is how he recalls the beginning: ‘My son-in-law was an extremely talented young gentleman who would win a series of academic competitions, only to later graduate as a physicist and develop the first Hungarian personal computer (HomeLab) with his friends. He received multiple employment offers, but the family put its money together and decided to establish some kind of electronics business.’

The family had a second home at Lake Balaton, and their neighbour was a gynaecologistdiabetologist. That was the time when the first American mobile blood glucose meters entered the market. One day, their neighbour showed them one of these devices, and they immediately saw the distribution potential in the domestic market. The economic rationale behind the business was the following: diabetes was already beginning to evolve into an endemic disease, but there were strict import restrictions in place at the time. The Hungarian invention came at a most opportune moment to the National Health Service (OEP in Hungarian), which started to subsidise its widespread distribution.

The mobile device was the company’s first flagship product, followed by several dozen new versions ever since. Given that blood glucose me ters are normally used by patients for a good many years, most of the revenue continues to derive from test strips rather than devices. On top of that, the product family barely has a share of 25 percent in the company’s turnover as of today.

Later on the company realised that – similarly to blood –urine may also be tested by means of photometric technology. What’s more, urine tests allow for the measurement of up to eleven values at the same time, while only one parameter can be measured in blood. Therefore, 77 Elektronika has shifted its focus onto devices suited for urine tests, and that’s what has brought along their real international success. The company’s first test equipment was also displayed at a Dusseldorf trade fair. Here, the small device designed for general practitioners attracted the interest of Boehringer-Mannheim, a diagnostics giant employing 24 thousand people, for they recognised that it may come handy when assessing whether a patient could possibly have any significant health issues which need to be thoroughly examined in specialised surgery. The product’s export was ready to go. Soon, another business perspective started to materialise. ‘There arose the question: if we are able to offer equipment to general practitioners, then why don’t we produce automatic or semiautomatic instruments for laboratories? The device performing urinalysis occurred as a major breakthrough in the world of medicine. Earlier, doctors had to bend over the urine to carry out a visual inspection with the help of a microscope. Let’s be clear on this. Urine smells bad, thus analysing several hundred samples was not quite pleasant,’ explains Sándor Zettwitz. With the help of the image recognition system, the device analysed what used to be seen through the glass of a microscope, and if the doctor so chose, he could comfortably keep track of the results via an on-screen display. The invention proved to be a great success, it has become the company’s flagship product by now.

83 percent of 77 Elektronika’s sales revenue derives from export today, and only 17 percent of their turnover comes from Hungary. The largest part of orders comes from Western Europe and China, while further major markets include Turkey, Thailand, Saudi-Arabia, Indonesia, Nigeria, Brazil, Chile, Peru and Panama.

The company has just started exporting to Kazakhstan and after the embargo also to Iran. The company still have a lot of plans. This far, the company has been engaged in the field of human applications, but from this year on they have been partnering with a US company to penetrate the pet health market of the United States. They supply the vast market with an annual number of 2,200 mediumcategory, semiautomatic sediment analysers, which are suitable for the blood testing of cats and dogs alike.

‘The key to 77 Elektronika’s success is innovation. The company has always re-invested 6 to 10 percent of its sales revenue into research and development. By contrast, Hungary’s average rate of R&D spending in relation to turnover is only 1 percent,’ explains the executive. Sándor Zettwitz is 83 years old and shares the duties with his daughter, his would-be successor. The group has recently launched its own metal processing plant in Balatonfüred, which applies 10 CNC-machines and employs 60 people. ‘Unfortunately, it is not easy to find quality and export-ready suppliers among Hungarian mediumsize enterprises, and that’s why we have started operations,’ said the owner. This far, the company has always had development and investment projects to such an extent that they were constantly able to reinvest their earnings. The company does not really need bank financing, but they have a standby amount anyway, should they need liquidity.

Selling the family company is not on their agenda. ‘We keep receiving offers, but we do not intend to exit the business,’ tells the executive.