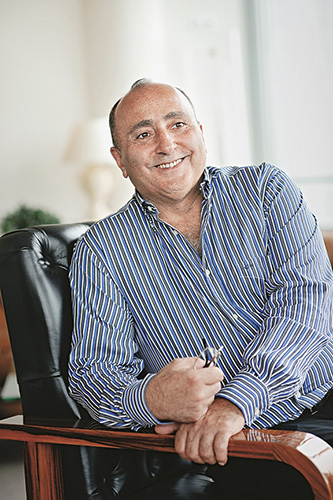 Dr. Riad Naboulsi is a rising star in the Hungarian cheese business. A man little known outside the industry; you can tell he is not much of a bragger. Yet he has a whole lot to be proud of.

The businessman of Lebanese descent was born in a highbrow family in the city of Tripoli, Northern Lebanon. Each of the eight siblings earned a doctorate degree, while he was awarded a scholarship and graduated from the University of Debrecen Medical School in 1982. He started out as an obstetrician in the hospital of Nyíregyháza, and later became a certiﬁed surgeon in Tapolca.

The children were raised in the tradesman’s spirit nurtured by their father. Duly advised by his father of the price of fruit and vegetables, the 6- to 7-year-old boy would do the shopping on his own. He earned all his pocket money by bargaining prices down. ‘I made the best living out of all my siblings. In addition, I learnt the importance of cost control,’ Riad recalls his smalltown days.

Besides his job as a doctor, he tried himself in business already in the old regime: he sold biscuit, wafer and sweets to the Middle East. However, the doctor’s salary was not sufﬁcient to fund the business. Upon graduation, their father bought each child a Datsun Cherry worth 90 thousand shillings in Austria. Leveraging the export of biscuit was the last thing his father wanted, thus Riad chose to sell his car to a colleague of his and bought a twenty-year-old van for 300 German Marks in Berlin, with the balance being used to fund his ﬁrst business.

He shortly realised that capitalism would destroy a sizeable part of the Hungarian industry, and stocks could well run short. Around 1992, he acquired the dairy of Nagykőrös which was destined to close down, and embarked upon cheese production for the Middle East markets. Back then, the dairy produced 800-900 tons per annum, as compared with today’s output of 30 thousand tons. In the early 2000s, he restarted several shutdown dairy plants in order to fulﬁ l increasing demand. Generally speaking, turnover and earnings increased by an annual average of 10 percent in each of the preceding years. The Lebanese War of 2006 brought about a period of faltering exports, only to be followed by hardships due to falling demand on the Hungarian market. The Syrian Civil War opened up yet another market: Kőröstej bridged a considerable part of the market gap caused by the horriﬁc devastation and the scarcity of milk.

They maintain an export/domestic ratio of 70:30. The products of the Group sell well in nearly all countries of the Middle East and in numerous states of the European Union. They export cheese to 40 countries on ﬁ ve continents. 95 percent of Lebanese consume Kashkaval cheese produced in Hungary. Hajdú has become a generic term for the product also in the rest of the surrounding countries, including Saudi Arabia, Kuwait, the United Arab Emirates, Oman, Iraq and Syria, but other brands such as Róna, Bihar and Kőrös are widely known as well.

The key to the impressive turnover of around 30 billion forints as well as to this year’s anticipated proﬁt of roughly 5 billion forints lies in continuous R&D and product diversiﬁcation. ‘I make good use of my degree in medicine here: I have a solid understanding of its biology,’ he says and winks. The market launch of several cheese varieties is underway now. For example, that of Traboulsi (Tripoli), a type of cheese also produced in Middle East households with a shelf life of three days. The same cheese produced by Kőröstej has a shelf life of six months with no preservatives added. ‘For the time being, I cannot reveal our novelties waiting to be introduced at this year’s SIAL Paris, which is one of the most prominent global trade fairs in the agri-food industry. What I can promise is that it will be acclaimed also at an international level,’ says Mr Naboulsi secretively. He regards growth management as a major challenge. The Group currently consisting of four production companies, namely Wassim Sajt Kft., Bábel Sajt Kft., Dráva Tej Kft. and Kőröstej Kft., is being restructured now: the merger is well underway as a result of which the companies will have been merged into a single entity, Kőröstej, by the end of the year. The process requires a wide range of measures, including the uniﬁcation of corporate governance systems, the rationalisation of the product range as well as the harmonisation of workﬂow. The vast proﬁt realised over the years are retained within the company; the owner keeps deploying it for future investments which bring the business forward. ‘I only take out as much as necessary for our livelihood,’ he adds humbly. After a long day at work, he spends his time with the family. With his Lebanese wife, an interior designer, they have brought up two kids, both of whom studied abroad. Their daughter works for a media company in the UK, while their son is now busy ﬁnishing his PhD and desires to get involved in the group employing around a thousand people today.