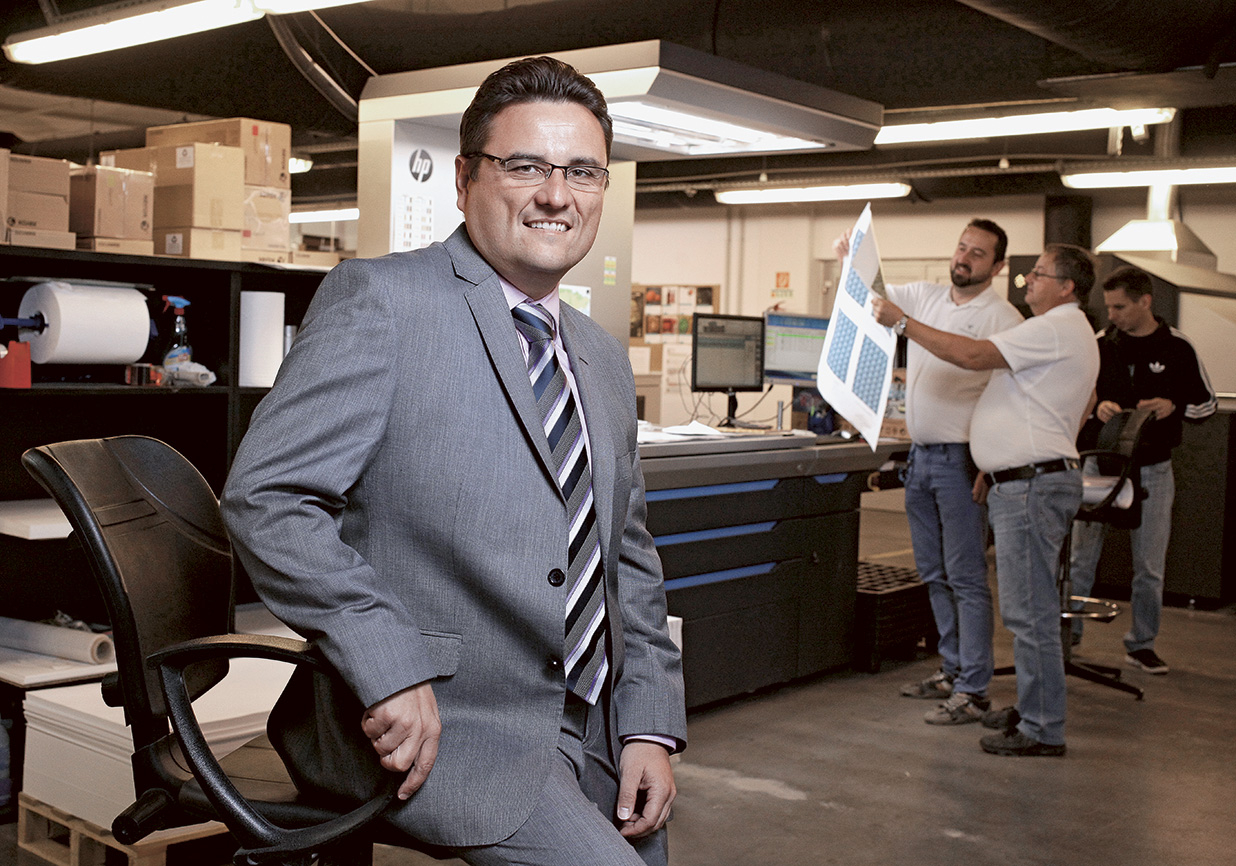 Péter Tomcsányi’s company is regional market leader in digital printing. And it all started with chess.

Success seems to be largely a matter of hanging on after others have let go. This quote from American writer William Feather is written on the wall in the hallway leading to the consulting room in the 4th-district headquarters of Prime Rate, signifying what lies beyond the success of one of Hungary’s leading printing companies. The twenty-year-old enterprise employs 180 people today in its own premises in Budapest and leasehold sites in Gödöllő and Jászfényszaru. About 40 percent of the income derived from printing comes from 100-150 foreign companies, mostly Austrian, Swiss and German customers, which Péter Tomcsányi is quite proud of, as only few companies manage to establish a direct connection with foreign customers.

The main service portfolio is made up of marketing materials, small-scale but high-quality books and publications, instruction manuals and correspondence with variable data, for example billing envelopes. Two thirds of the top 200 Hungarian enterprises are included within their clientele, accounting for a total of 400-500 companies. They put great emphasis on high added value services. For instance, in case of a large electronics producer, besides printing instruction manu als and warranty cards, they pack the electronic accessories in nylon packets and deliver it foursix times a day, which is quite a serious task for production and warehouse management. Prime Rate is market leader in digital printing both in Hungary and in the near region. Three years ago they started using the technology of sheet-fed offset printing, which they have been developing to this day.

The founder has to thank his hobby, chess that he entered this sector. At the age of 17 he was Hungarian champion in his age group, but since he started it late, he had to accept that he probably would have no future in it. To finish off his career, he started organising international competitions, for which he needed a company, so in 1994 he founded a partnership, Prime Rate Bt. On the other hand, he started writing a book on chess, which he finished in 1997. After all publishers refused to publish his book, he started to go from one printing company to the other with all the little money he had. Finally, he found one where they would take the order by one third cheaper than elsewhere. After his book was finished, he started commissioning orders for them. After a while, more and more customers wanted to print in smaller series, but that was not possible back then. Afraid to lose his most important customers, Péter Tomcsányi used up all his revenues from commissioning and bought his own digital printing machine in order to fulfil varying demands on his own.

Prime Rate Kft. has evolved from a traditional printing company to more of a communications partner by now. Customers are less bothered by the price of a flyer today, instead they have mores specific queries: “I organise a conference, how could I make sure it is going to be fully booked?” Or: “I have a message for a target group, how could I reach out to them most efficiently?” The company now has a whole department dealing with demands like these and they are focusing on hybrid communications now, which means a mixture of printed and online solutions.

Besides organic growth, Prime Rate does not shy away from acquisitions. If they identify synergy in a new opportunity, they do not hesitate to acquire. They acquired one of their competitors in 2003 and the company has carried out a number of smaller or bigger transactions and customer portfolio acquisitions since then. In the printing industry, besides fast changing demands, it is vital to duly respond to the turbulent evolution of technology too. At the firm, this is ensured by the top management of 6-7 people and the middle management of 15-20 people.

Péter Tomcsányi’s financing policy is rather conservative. He has never started an investment in such a way that the transaction would endanger the stability of the company. The only occasion he took a bank loan was in 2005 for the building of the headquarters. Having regard to the unforeseeable outcomes and events of the market, he always makes sure to have enough reserves for a period of about one-and-a-half to two years. As for the future, his 19-year old daughter is showing more and more interest in the operation of the enterprise. Perhaps in 7-10 years, after gathering some experience, she will take over the company with her younger brother. By that time the company is expected to produce a sales revenue of 10 billion forints.