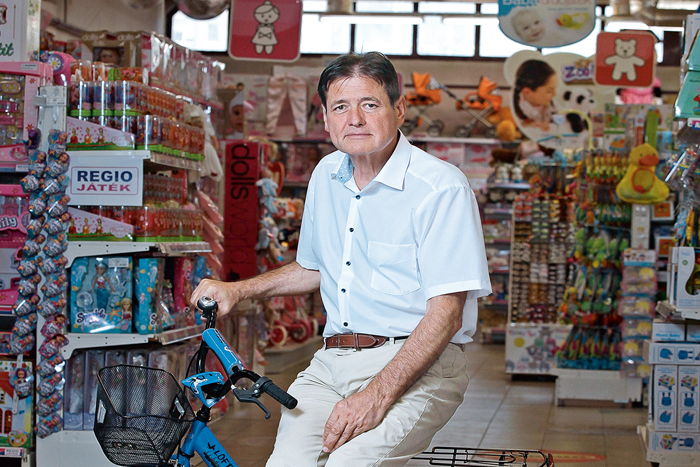 József Gyaraki, the founder and executive of the Regio toy store chain, is not only proud of having developed the store that started as a family business under “damned socialism” into the biggest toy store of the country, but also of the fact that generations have grown up on products often available only through his company.

The hopping frog, puppy bank, a Moskvich car with pedals – all of these are enough to make even 25- or 30-year-old Hungarians nostalgic, immediately calling to mind a range of personal experiences related to these iconic toys. This invisible bond connects even strangers, which is why selling toys means more for József Gyaraki than just selling products with a profit. The executive considers it not only his achievement, but that of the entire profession that he was awarded the Knight’s Cross of the Order of Merit of Hungary in 2017 in recognition of his decades of work for the continuous development of the Hungarian toy trade and maintaining the marketability of Hungarian manufacturers. As they say, nomen est omen: the company that produces the legendary Hungarian game “Gazdálkodj okosan!” (Trade Smart!) under their own brand has also been growing continuously for over 35 years, and achieved record revenues of HUF 10.7 billion last year, a billion higher than the year before.

He opened his first toy store with his wife in 1982, when wholesale trade was still a state monopoly. Therefore, they laid the foundation for their eventual business in a smaller version. As supply was scarce in the country at the time, they searched for toy-making craftspeople – of which there were many in the country at the time, as anyone who was good at this trade could turn it into a profitable second job. As the company leader is the type to be interested in everything, he would go to visit workshops, check out tools and injection moulders, and would decide whether to order from the maker based on this information. One benefit was that József Gyaraki had trained in both commerce and mechanical engineering vocational schools before getting his engineering degree, therefore he had a solid background in the field. They visited the Nuremberg International Toy Fair every spring, where they browse the international selection for products missing from the Hungarian market. The first big boost the business received was from the Danish national treasure, Lego, that they transported home on a truck directly from the manufacturer. According to the executive, the secret of Lego’s Hungarian success is that it became a status symbol in the public consciousness – as it was difficult to import it, pieces were usually brought home by parents who could travel abroad, i.e. richer people. Nowhere is the Danish building block as popular as it is in Hungary, where it enjoys the highest sales per capita.

After the regime change, József started mass production: in 1990, he founded Regio Toys with a centre in Budapest and a store in Pécs with ten employees – now, nearly 450 people work in the nationwide network of 34 toy stores, selling a total of 15,000 types of toys. Every store has to participate in shared burdens. Profitable operation is expected, and they must also assume their part of central marketing and other expenses. Instead of going abroad, József Gyaraki is considering expanding his Hungarian network, as there still are blank spots on the map: they primarily intend to cover county seats. Their operations as a company started as a wholesaler, but they quickly got into retail, where they already had some experience. Today, most of their revenue is from this field. Their innovative approach and openness to technological development were indispensable to their success. For example, they were the first to introduce bar code stock registry in 1993, thus greatly facilitating logistics and giving Hungarian suppliers an advantage when the multinationals arrived on the market. Their webshop also opened more than ten years ago, in 2006. The proportion of their sales made online is increasing constantly: it is currently around 5%, but they would like to increase it to 30%. This is also the goal of the new Törökbálint logistics centre opened last year.

When the multinationals appeared on the scene in the mid-90s, they devastated the sector: Hungarian businesses had not yet had time to grow strong when the very efficient multinational chains with decades of experience came in and took over most of the market. Gyaraki could have decided to buy a factory at that point, but he thought that getting and keeping the market was more important than manufacturing – it makes no sense to produce goods only for the warehouse. “The best tactic is to build up the market first, then if something is scarce, to produce that thing”, József Gyaraki concludes.

These products included sleighs, the Trade Smart! game, and slide projectors – Regio’s own brand toys, manufactured because they were scarce on the market and there was a demand for them. The slide projector was the most complicated project, as it had to be made “21st century proof”: it was redesigned, made more user-friendly, and LED lights were added so that it would not heat up. And the popular family game was published with new “sponsors” along with the old ones, i.e. new stores on the various fields.

The executive believes that game trends come and go almost as fast as those for clothes in fast fashion chains. The product life cycle has become drastically shorter, often down to only a couple of months. According to József Gyaraki, the important thing here is to have these suddenly popular articles available in Hungary at the same time as in the West, so that they do not have to be ordered online. One good example is the fidget spinner: they managed to ride last year’s wave, as the promising product had shown up at trade shows and they stocked up on it. Taking another analogy from the fashion industry, József Gyaraki says a good eye is very important for the toy trade, as they have to find hits on at least seven trends out of ten in order to function profitably in the long run. These days, more and more people desire computer-connectible toys, but collectible, reshapable products are also popular. For example, there are many food-like ones, such as the croissant that can be turned into a bear, or the flower fairy. Branded products – e.g. Disney – are popular because they are heavily marketed, they come prepared with a story, and kids see them all the time on TV or in movies. Frozen, for one, has enjoyed a rather long season, remaining a popular product for years. Gyaraki thinks this may be because – as it stands alongside the usual Barbie dolls – it satisfies the need for novelty.

As a family business that has been operating successfully for a long time, the issue of generational succession naturally arises, but it is in safe hands: both of Gyaraki’s sons work at the company, while his three grandchildren make their contribution by testing toys.

Getting Hungarian toys to customers has been their policy from the beginning. The Hungarian market, however, is too small to produce toys only sold here – just to illustrate, the raw materials alone for a Hungarian toy cost more than the finished product shipped from China. However, the technology of the future offers a solution: in the world of 3D printers, they can produce larger products when it does not make sense to have them shipped. According to József Gyaraki, this technology will gain a lot of ground in the future of the toy industry.