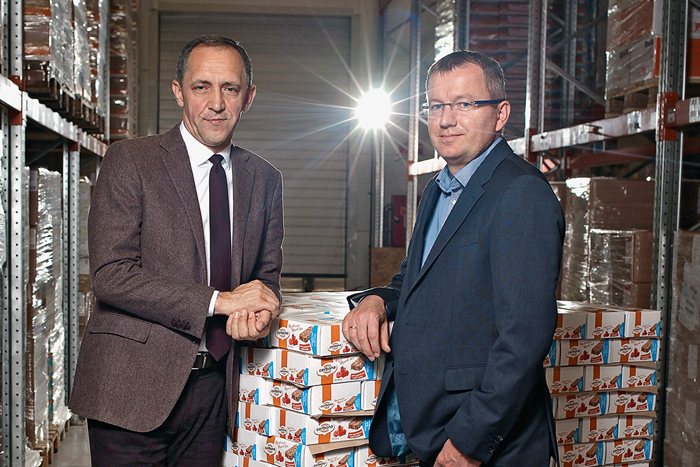 Cerbona is one of the big winners of the transformation of the Hungarian cereal industry. The company is the market leader in Hungary, therefore their goal is to achieve the greatest foreign expansion possible.

The predecessor of Cerbona was the Fejér County Cereal Trade Company, founded in 1962. In those days, each county had a company in charge of the local cereal production. The management at the time decided to start producing new products along with the traditional ones, relates Tamás Mészáros, Executive Director of Cerbona Élelmiszergyártó Kft. In the mid-1980s, they built the second largest Hungarian pasta factory. A couple of years later, in 1987, they got the idea to produce cereal bars and cereal flakes after a study trip abroad, and purchased German production lines. These were of such good quality that some of them are still used in production today, after thirty working years.

During privatisation, the Cerbona brand name was born as the portmanteau of two Latin words: cerealia (cereal) and bona (good), i.e. something good made of cereal. The company’s employees went on to become the owners. The company had three branches: milling, pasta production, and products from extruded cereals. They became the market leader of granola cereal products, and still hold that position today.

On the other hand, the milling industry underwent considerable changes, and as a result, this division became loss-making. The former Eastern European markets for pasta disappeared, and the company with a revenue of HUF 10 billion and 400 employees, already known as Cerbona Zrt., amassed debts that the banks were no longer willing to finance. The company thus filed for bankruptcy in 2010.

However, the extruded products division got another chance thanks to a group of investors led by Dr Attila Pókecz. They were experienced in restructuring struggling companies in order to make them profitable again. They did not engage with the milling and pasta industry activities, and instead only focused on one division. They started to operate it on the basis of an unusual but very effective construction, whereby a newly created project company bought the raw materials, sold them to Cerbona, then bought back the finished products. It was thus that they were able to keep the company in business. Finally, in 2012, the project company bought the manufacturing equipment. The way in which the company is owned and managed is different from the general practice of Hungarian companies. The management manages the company under its own scope of authority and responsibility.

As the divisions had only been separated with respect to production, but sales and other activities had been unified, these were reconstructed after the ownership change, and they also restructured their partnerships. Reforming everything on a new basis was of strategic importance, which thus increased trust in Cerbona. The success of this change of direction and reconstruction was increasingly apparent, even in the mode for payments to suppliers.

In putting the company on this new trajectory, new quality assurance, production, and maintenance systems were also created. The accounting and management structures also changed. Recalculation and controlling were emphasised: they only worked with partners and products that were profitable. Now, results can be seen on a weekly or monthly basis, both for products and for partners. In this sector, it takes 12 to 18 months for a product to prove that it can stand its ground on the market. They also realised that producing house-brand products was less profitable than producing Cerbona branded ones. This also did much to boost the company’s results.

Their exports increased from HUF 30 million in 2011 to more than EUR 2 million in 2017. Cerbona is especially strong in Romania, the Baltic states, and the Balkans. They occasionally also export to the Arab countries, and are working on making their way into the Western Europe markets. There are multiple ways of penetrating into a foreign market. Most producers use distributors, which simplifies things, but also limits opportunities. Distributors offer positional advantages, but they can also be a hindrance. One benefit is that they are present on the market with their own network of contacts. However, they also have their own business policies and goals, and these do not always match the interests of the exporting company. Cerbona follows a slower, but longer-term construction. By employing people who live in the area in question, they find relationships themselves – an approach which works very well in Romania and the Baltic states. They are also present at major international trade fairs – another opportunity to learn about global trends.

Cerbona has an active investment policy. In 2016, they purchased a production line for puffed cereal bars and launched a new division with these products. Last year, they opened a production hall for gluten-free products, while this year, they worked on expanding cereal bar and breakfast cereal production. They also made acquisitions. In 2016, they acquired the Ham-Let company, a producer of puffed cereal bars. This meant a new range of products, but it was one that matched their business philosophy. Last year, they acquired a minority share in a startup company by making a capital increase. This company produces vegan protein products. Profits are generally left in the company, while investments are mostly financed with their own funds, or, to a lesser extent, by bank loans.

Cerbona also emphasises product development. The market is changing, and this change has recently become very fast-paced. Demand for lactose-free, gluten-free, and oat-based products is increasing. Oats began to grow in popularity three or four years ago, accordingly, a complete, oat-based product range is being developed, which is also the case for the ranges of gluten- and lactose-free products. Starting out, they produced 25-30 types of products; by now, this number is 150. There are 30 kinds of Cerbona branded cereal bars – the thirtieth is the anniversary Dobos cake flavoured special edition.