The right time, at the right place – in a container - Mobilbox Kft. - Bet site 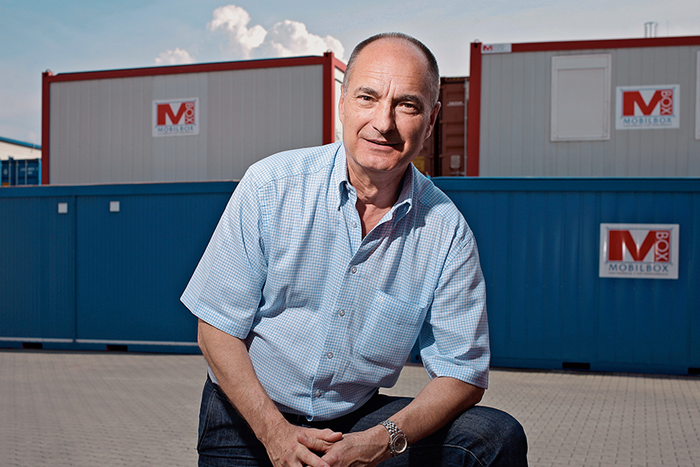 Containers and modules are used in a surprisingly large number of areas. Mobilbox is a market leader in many countries, including Hungary.

Its story began in the early 1990s, when Zoltán Nyemecz, a forwarding expert and now the managing director of Mobilbox Kft, started to trade in imported second-hand containers. They started the business in the Depot Division of Raaberfreight, an international freight forwarder. After the political changes in 1989-90, imports from overseas – mainly in containers – boomed and container depots were full of empty containers. While maritime shipping companies wanted to get rid of their old containers, the construction industry wanted to get their hands on them to use them for storage. Supply and demand came together at the forwarding company.

After that, needs started to become more refined; construction companies wanted windows, showers, toilets, and even thermal insulation on the containers. Meeting further needs and managing the company required a different approach and operational model in terms of both trading and finance, so in 1997, they decided to separate this business from their forwarding operations. It was thus that Mobilbox Kft. was created, which celebrated its 20th anniversary last year. At the beginning, it employed a few colleagues from the forwarding company, but in the early 2000s, Mobilbox became their employer, due to the changing legal requirements.

The real change however came at the end of 2007, when Zoltán Nyemecz left the freight forwarding business and focused only on Mobilbox. At first, they were stronger in selling containers, while container rentals, an activity they had pursued concurrently, grew in importance later on, as it requires more investment.

HUF 10 million as starting capital What they earned in sales, they invested into the rental business. For years, they did not need any external funding to grow. At the turn of 2004/2005, the company reached a sales revenue of HUF 1 billion for the first time. This was an important milestone, because they had to develop their initial, loose organisation into a serious company. They implemented an ERP system and an ISO quality management system, launched product development, created the final product range, set up the necessary technical background, and the Mobilbox standard. The company also acquired the NATO supplier certificate in the meantime. Their organic development was uninterrupted, as they went on to open the Szigetszentmiklós depot and production hall in 2008. Last year, they expanded it to include a 1,200 m2 warehouse.

The financial crisis of 2008-2009 hit Mobilbox too, but it also meant a new opportunity to develop. Until then, they had focused more on trading and direct product sales. The crisis however reduced this kind of effective demand both in Hungary and abroad, so they had to focus more and more on renting. This required constant market observation: they had to know how many containers each company had, and how many they needed. From experience, they put together a container portfolio, 55-60% of which are office containers, 25-28% are storage containers, and the rest are ancillary containers such as sanitary or reefer containers. The container stock grows flexibly. It always adapts to the market and started to grow dynamically in 2009. They currently have 5,000 containers available for rent, and the average length of rent is 8-10 months. Summer event organisers rent them for a shorter time, while they are taken for a longer time for construction projects, for example.

Mobilbox has been present abroad for more than 15 years. They made the first step in December 2002, when they established their subsidiary in Bucharest. This meant that Mobilbox became the first container firm that offered renting on the Romanian market. Then they went a bit further: a large Hungarian construction company was expanding in Bulgaria, and Mobilbox followed suit, extending the cooperation they had started in Romania. This construction company is quite active in the region, as it has subsidiaries in Romania, Bulgaria, Austria, Slovakia, the Czech Republic, Poland, and Germany as well.

The conquering of foreign markets does not stop with the countries of the region. Indeed, this Hungarian company is present not only in Europe, but in South America and New Zealand as well. They have a representative office in China, where they also have a manufacturing facility and serve the overseas market primarily from here. They are the market leader in Argentina. Mobilbox does not risk having an own organisation or making capital investments outside the Old Continent. They serve their customers there through franchise partners.

Since its foundation, the company has been in 100% Hungarian ownership and is headquartered in Budapest. This is the place of strategic decisions, product development, and home of its IT centre.

It happened only once that they needed external investment; otherwise they always used bank loans for expansion in Hungary and abroad, in addition to their own resources. The above-mentioned exception was the German subsidiary, where a friend’s company invested capital.

The company plans to develop and put new products on the market in the future, while strengthening their presence on international markets is also a strategic goal.