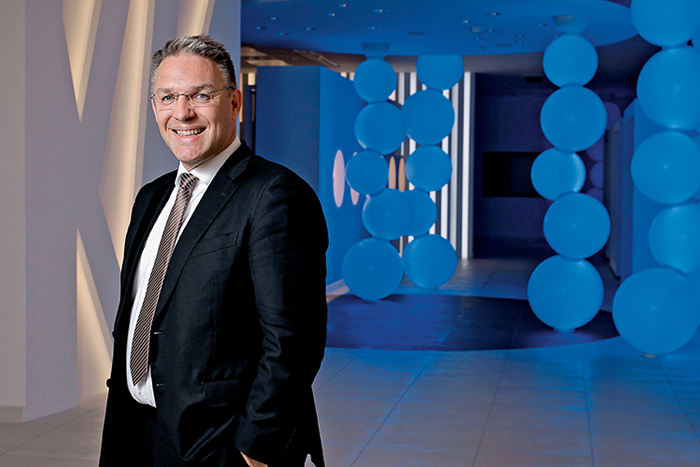 Hungary has recently regained a large enterprise with a Hungarian decision-making centre. With a tradition of innovation that goes back more than 120 years, its current plans are no less ambitious: in ten years, its CEO wants to transform Tungsram – that already employs approximately 5,000 people – into a company with a revenue of USD 1 billion and a strong global presence on the lighting market.

Joerg Bauer, Tungsram’s German-born President and CEO has been living in Hungary for almost two decades. He has become fairly Hungarianised by now, as he met his wife in the corridors of the legendary Váci street “lamp union” office building, and thus his family also connects him to Hungary and to Tungsram. General Electric (GE) was one of the first to found a Hungarian-American joint venture after the regime change. Then, after 1989, it bought the world-renowned light bulb factory step by step, along with many other Hungarian factories. Still, the company headquartered at Váci street was called Tungsram by almost everyone in Hungary. Furthermore, the megacorporation kept the brand name in various fields, and for various lamp families.

However, around 2016, the American company launched a large-scale restructuring and decided to sell its Central and Eastern Europe light source subsidiaries. At this point, Joerg Bauer was one of the primary Hungarian managers of the company, with a seat at the Board of Directors, and decided to step forward to buy the Hungarian light source business from GE. This was realised in April 2018.

However, this step took a lot of courage. The company employs 4,000 people and produces a yearly turnover of around USD 300 million (HUF 84 billion), yet, for now, it only produces a very modest profit with its five Hungarian production sites, two major branches, and a tradition of more than 120 years.

However, in recent years, the global market of lighting technology has undergone a great change, therefore it is difficult for a European producer to turn a profit. Over the course of a decade, LED technology has taken over. LED bulbs consume very little power, their service life is long, and as the CEO says, they can be easily mass-produced by Asian garage companies in a lesser quality. For individual consumers, price is more important than quality; that is, in global retail sales, consumers are less ready to pay a premium for a large enterprise’s product quality, and its R&D. Thus large manufacturers are left with special, mostly business segments.

It was thus that the former GE Lighting now re-named Tungsram, with the help of development funds from Eximbank, once again has a Hungarian decision-making centre. Its primary targets are B2B markets, including industrial, logistic, office building, store, and city lighting solutions. It is here that quality is important as an increase in maintenance intervals can result in major savings for operators.

Tungsram produces light bulbs and lamps for three main sectors: general lighting solutions, automotive lighting, and the manufacturing of components. They face the greatest challenges in this third sector, as LED technology will overtake more and more of this field in five, ten, or fifteen years. On the other hand, buildings built before 2008 with old-style lights will need the company’s products for decades – if anything, volumes will decrease.

In automotive light bulb production, LED technology is slower in gaining ground, and the Hungarian company is a global market leader in small light bulbs (internal automotive lights, license plate lights, etc.). Of course, there are nearly 200 light bulbs in a car, and the ratio of LEDs is growing, but Tungsram already manufactures a family of products for this purpose. For they are truly a manufacturer: it is not a question of them putting the renowned and nicely redesigned Hungarian logo on Asian products, but metal parts are manufactured and glass is blown here, in Hungary, and the entire production chain uses approximately 1,500 suppliers.

In addition, the owner and CEO is “reaching down” for niche businesses worth only HUF 5-10 million that were let go of in the GE times, often understandably. The local arm of a global enterprise was too big lacked the flexibility to do so. While the Hungarian centre was always the second after the GE Lighting North America division (no small feat!), this company is still an important customer of Tungsram.

The greatest growth potential lies, of course, in the LED business. Not however in the super-discounted products sold in DIY stores and hypermarkets, but in professional, industrial, warehousing, and urban lighting solutions. For example, they can install smart LED street lights without replacing posts and the cabling system, only the internal fittings. Municipalities and companies can save a lot this way, not only in Hungary, but worldwide.

The company achieves 95% of its USD 300 million turnover from exports; Hungarian customers are mostly for prestige, and serve as an excellent reference in the 106 countries they supply. They also have their own commercial offices in 24 countries. In professional and automotive lighting, having not only production, but also R&D in the Budapest centre are a massive advantage. Another factor is that the tungsten filament light bulb and the krypton light bulb were invented by legendary Hungarian engineers, therefore the factory was considered cutting edge before 1945. Luckily, these strong bases survived communism, and the research division was kept and expanded by GE. This is how Tungsram, the leading company of the region, was able to remain the third largest European manufacturer in professional lighting technology.

The company serves business and automotive industry needs as a large, renowned, original manufacturer, strong in technology, but much more flexible than multinational companies. They are also turning towards new fields, such as manufacturing batteries for electric vehicles, as they can produce one-tenth of the parts of car batteries themselves, thus using capacities that are freed from traditional light bulb manufacturing; as well, this allows for very expensive production lines to be assigned to new tasks. This way, jobs can be kept in this field in the long run, and not only the ones in the automotive industry, LED production facilities, and production lines. We also must not forget that today, Hungary is a major battery producer.

Meanwhile, Joerg Bauer’s plans are ambitious: if he is successful, Tungsram will become one of the most important companies with a Hungarian decision-making centre for decades to come, re-joining the likes of Richter and Rába. The manager, who is fluent in Hungarian, wants to reform Tungsram into a company that is stably profitable within five years. Within ten years, he wants it to be rated as one of the best in the field on both the European and global levels, with a revenue of USD 1 billion.

His plans, that include transforming the company’s R&D division into an open innovation centre, will contribute to realising this goal. They would cooperate with small, agile start-ups to increase the production and efficiency of their three divisions, and to make sure that their technology remains among the best in the world. This definitely works on the symbolic level, as the light bulb remains the international pictogram for innovation, innovations, and ideas to this day.