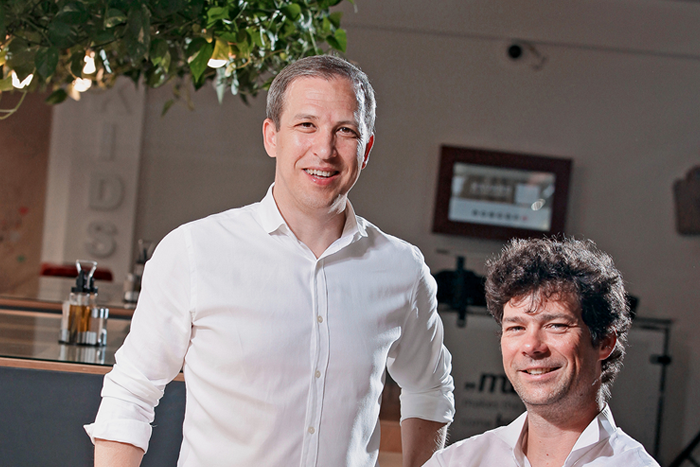 The management of CyBERG Corp. is convinced that their company is set to become a global IT giant. Although they are currently working on creating an international restaurant franchise, their business model will later be based on digital services sold through the restaurants’ touchscreens.

In recent years, IT companies have made a big splash in many industries that traditionally had had little to do with the digital world. Just a few examples include Uber and the transport market, or Airbnb and the hotel industry. The Hungarian CyBERG Corp. is planning a similar move: to revolutionise the world of restaurant chains with their KAJAHU project.

CEO Balázs Rózsa, with years of experience in the financial sector, came up with a hybrid model that marries technology with the catering industry. Progressing with deliberately small steps, he worked on perfecting the system for years, reducing errors to a minimum. Finding his co-manager, Erik Szabó, who had previously been a key figure in the largest Hungarian Internet agency for almost 20 years, was another addition to the technological side of the business. In developing the food selection, they took aspects of risk minimisation and international statistics into account, and chose to sell well-known, international standard food items. In order to make their products unique, tasty, and healthy, they feature Hungarian Grey Cattle meat for their burgers.

The truly unique part of their concept is that they have built touchscreens into the tables of their restaurants. These are used to order, to pay, and to access various contents and services. Children can enjoy cartoons, young people can use chatrooms with the other guests, while adults can take part in live quiz style games if they wish. The digital platform will expand even further to include musical services and new games. Taken together, this is the #FoodTogether community experience.

CyBERG Corp. approaches catering from a different perspective than current market operators: in the long run, they see business potential not only in restaurant services, but in digital content as well.

As guests generally register into the system of CyBERG

Corp., their purchases can be monitored, and personalised offers can be made based on the customer profiles. The system can also invite people automatically, offering them various discounts. These digital devices partially replace the work of waiters, thus decreasing personnel costs considerably. With time, even pricing can change: they intend to create a system similar to the one used by low-cost airlines. They are considering a dynamic pricing model, where the price depends on whether the consumer is time- or cost-sensitive. People who eat outside of peak times, such as at 4:00 PM, will be able to do so at CyBERG Corp. at a considerable discount. On the other hand, people who want to be served quickly at the most popular time may be willing to pay extra.

The innovative restaurant is rated highly by Hungarian regulars, visiting tourists, and business partners alike. When their earlier test unit opened up in Petőfi Sándor street, Budapest in 2014, calls from potential international partners immediately started pouring in. At that time, the managers were not even aware of the true value of the business, that their underlying idea could disrupt the entire franchise model. The income of worldwide brands is made up of small percentages of restaurant traffic, while the business strategy of CyBERG Corp. will – after reaching a critical mass – ultimately be based on the digital services sold in the restaurant network. In a few years, they will have more in common with Facebook or Google than with McDonalds or Burger King. But their main goal is to implement a combination of the two categories. With time, if their network becomes large enough, their user database may even grow to a size comparable with the above-mentioned IT giants.

As for the ownership structure, in the pre-IPO phase, they have managed to obtain investments from Hungarian institutions. The fact that their idea is trusted by numerous independent experts is a good sign. Furthermore, they have already collected multiple professional awards, which also validates their ideas and reinforces trust. Although the top managers come from other industries, multiple renowned Hungarian experts and the former French manager of the Pizza Hut chain are on the board of directors.

This year, they have already sold local franchise rights for five countries in the current phase, therefore next year, a total of 83 CyBERG Corp. units will open in Slovakia, the Czech Republic, Poland, Austria, and Hungary. In the next few years, the company will open its own flagship restaurants and competence centres in London, Madrid, Paris, New York, and Shanghai.

They are also planning the initial public offering of the brand owner, CyBERG Corp. Both the management and the board of directors include people with stock market experience, therefore they are expected to take this step successfully, and to progress towards making their vision a reality: the construction of a global technological company that revolutionises the classic restaurant chain model.