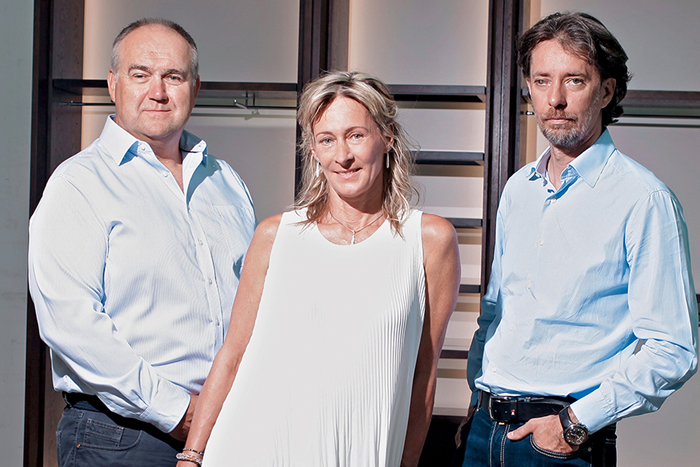 Megaholz believes in continuous, organic development. This Budapest-based company makes customised shop furnishings mainly for the Western European market. Their key to success lies in their focus on quality, basing growth on solid foundations, and the quick adaptation of innovative solutions in the industry.

For a long time now, shopfitting been about much more than just shelves to display products. The atmosphere of the shop floor that welcomes potential customers is also an important element of image-building. Whether it is a petrol station, a shop for food or clothing, differentiation, the use of the latest technologies and smart solutions are a priority everywhere. Design and function unite at the highest level in luxurious, high-fashion shops, and Megaholz takes the lead in this area as well: through one of its subsidiaries, it took part in refurbishing of one of the luxury shops on the Champs-Elysées in Paris.

Their orientation towards Western Europe orientation has been present since the beginning, as the company began as a distributor of a German modular shelves system back in 1991, explains Gyula Ádler, owner and managing director. Retail customers were also a target group at the time, but they realised that they were selling more and more to shops. After a time, they shifted to shopfitting, and wanted to serve increasingly complex customer needs. They were unfazed when a network of petrol stations asked them to refurbish 400 shops in three months. They took the job, did it and learnt a lot in the process. The owner is still proud of this project, because he regards this kind of flexibility and project management as the main competitive advantage of his company. In addition to reselling, they started manufacturing around 1995. Concurrently with the appearance of multinational companies in Hungary, they realised that the business would not be sustainable if it only stuck to distribution. The reason for this was that large international corporations make general agreements; they will go through dozens or even hundreds of shops to find furniture manufactured according to their parameters. Today, Megaholz can supply practically anything. In addition to shops, they do jobs for hotels, offices, and public institutions. As their projects are very customer-specific, they do not really have own products, and always work according to customised needs. Economies of scale led them to work more for larger chains that have many shops: they currently have about 100 active partners. The company manufactures furniture from – as the name implies – wood, but they also use metal. Glass, Plexiglas or plastic parts come from their suppliers.

They could immediately feel the global economic crisis in 2008 because cutting back on spending was one of the first steps of rationalisation in many companies. They still managed to navigate through this time largely unscathed, though they had to take a few unpleasant steps. In hindsight, however, they discovered the good side of it all, as the crisis had forced management to implement efficiency measures that paid off later.

What helped in their planning was that they had already begun to develop their international presence, as they had seen the limits to the Hungarian market. Today, almost three-quarters of their revenues come from abroad, mostly from Western Europe. An important key to success was that they did not have to set up an international network from scratch, because they had already worked for multinational corporations in Hungary, which had boosted export revenues. They will continue to focus on international expansion in the future as well. Their main target markets are Germany, Italy, France, and the Netherlands. Though there was a time when they believed that China would take it all on this market, they soon realised that there is a strong demand for customised furnishings. It is not possible to furnish hundreds of shops of a multinational chain present in ten countries using only one standard type; hence, they reoriented their focus on Europe.

Similarly to most of the Hungarian manufacturers, labour shortage is a serious issue at Megaholz as well, one they have been struggling with for three years, says Gyula Ádler. They try to mitigate its effects by using automatisation wherever possible. CNC machine operators cannot, however, be replaced with robots, and thus the lack of skilled professionals has become a serious obstacle to development. There is no point in buying a new machine line if in 18 months they do not have anybody to operate it. The company currently has a headcount of 100, but process and system development have increased their efficiency: their production output has increased by 50% while their number of employees has remained the same, the managing director tells us proudly.

Innovation is part of their everyday life; as soon as a new technology or development comes out, they try to apply it immediately, so that they are ready when customers start to demand it. Shop furnishings change all the time, though not that often as in the fashion industry. There used to be periods when white was the trend, then everything became grey; today’s fashion colours are black and dark tones. High-fashion shops have shifted towards increasingly complex metallic, stone, and glass systems, but this is not necessarily the case everywhere, says Gyula Ádler, adding that there will always be companies who will distinguish themselves by going into the opposite direction. Delivering a project takes less time than many would think: it takes about one and a half months from the first contact to the installation of the finished pieces of furniture, if no special design is needed. A lot depends on the client as well: luxury brands usually send a visual design scheme, and the company often must apply quite novel, innovative solutions to implement it. Megaholz is, however, not scared of thinking “outside of the box” – they have made the furnishings for many luxury shops on Budapest’s Andrássy Street.

The managing director believes that they have been able to operate and grow continuously on both the Hungarian and Western European markets for more than 25 years because they had their own capital and did not take on any loans to implement their investments. They are, in principle, open towards involving an investor, but only the latter brings along a market, because they are also able to develop in the current, proven structure while managing market fluctuations. Although they have the capacity to take on more orders, they do not want to grow too big too fast. They have a preference for organic development and plan to expand by 15-20% a year, as a rate of growth that they can manage both organisationally and financially while maintaining high standards – the trademark of the company. Megaholz thus proceeds prudently in this fast-paced – and so far, their calculations have proven to be right.