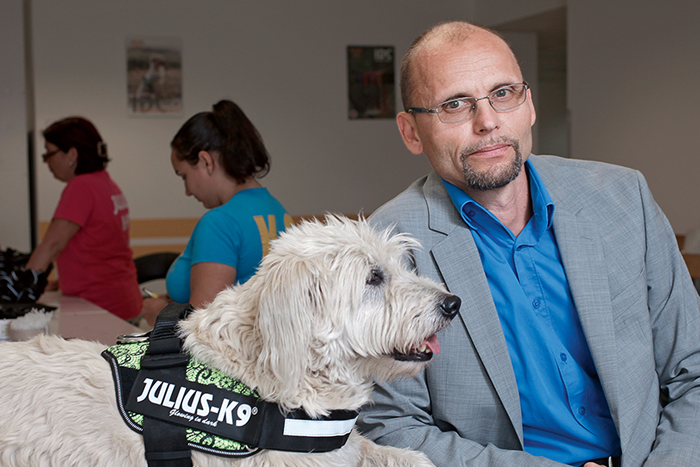 The Hungarian Julius-K9® brand, renowned by dog owners for its quality and its unique solutions, may well be called the BMW of dog harnesses. The revenue of the business that started out in a garage now exceeds HUF 5 billion. Their dog equipment is sold in virtually every country, and they are one of the suppliers of the US Army.

It was entrepreneurial insight that motivated Gyula Sebő, the founder of the company that manufactures and distributes Julius-K9® equipment to the then-niche market. Since then, they have obtained dominant positions in the market of dog harnesses and equipment in numerous countries, and they even received the “most favoured brand” recognition in Asia. Because of the rapid expansion of global demand, they had to take a step forward: they opened a new manufacturing plant in Tiszafüred with more than 100 new employees this April, thus bringing the number of the company’s employees above the 500 mark, and putting them well inside the category of large enterprises.

Gyula Sebő – Julius is the German version of the name Gyula, while K9 refers to Kele street 9, where the manager received his first dog in Budapest, thus making up the name – founded the company in 1997 with his wife, Anikó Bakos. They started out from a 15 m2 garage, in true start-up style. The founder, who had worked as a dog trainer in Hungary, first encountered the then-popular world of service dogs when he moved to Austria. He was perhaps accepted in this circle, he recalled, because he used to train police dogs as a volunteer. He noticed that, although the training was professional, the equipment and harnesses were rather primitive. This is how the Hungarian dog harness manufacture started, initially managed from Austria. Their first customers were armed organisations such as the police and cash-in-transit companies. The founder considered the area of service dogs to be an interesting experiment, as they could develop special equipment, and they were also the first in Europe to manufacture bulletproof dog vests. Later, they decided to focus on the civilian side, both for business and ethical reasons; Gyula Sebő says that he would not have felt good if, in an eventually situation of armed conflict, he would be accused of profiteering. Another important reason for civilian use was the emotional power of dogs, and the partnership that they can offer people. As Gyula Sebő says, “the main message of our four-legged friends is that people deserve to be loved”.

One decisive moment in the life of Julius-K9® was the 2003 World Dog Show in Dortmund, attended by 120,000 people and tens of thousands of dogs. This was when they realised, looking at the other exhibitors, that they had a really good foothold in the market: they were completely up-to-date in technology, and represented a good value, even on the global level. A small, yet effective accessory was an important element of their early success: a replaceable, Velcro-fastened label on the dog harness. This gave the simple, almost invisible, utilitarian piece of equipment a new dimension: the dog was “personalised”, allowing the owner to send a message about the dog to the world. “Taxpayer” and “I’m Hungarian, not a stray” are some of the perennially popular labels.

The company’s history also includes obstacles along with its successes. According to Gyula Sebő, one major challenge was when the entire Hungarian textile and leather industry went bankrupt in a couple of years in the mid-2000s; accordingly, the price of the materials of the harnesses increased manifold. And when it rains, it pours: years of litigation ensued after leaving foreign offices behind with easily sidestepped contracts during their move from Austria to Hungary, as they did not defend the interests of the Hungarian company appropriately. Not long after the move, their largest foreign representative started to have the entire product range manufactured in China; all stocks were replaced as a matter of days in Austrian and German store chains, in a total of 1,700 stores, causing the company millions of euros in losses. But they didn’t stay down for long: Julius-K9® quickly took a new direction. They started to build their brand consciously, registering patents that still define their company, along with continuous innovation. There is no shortage of ideas at Julius-K9®. The newest trend, that “everyone works on, but no one admits to” is that of smart dog equipment, i.e. harnesses with small built-in sensors that measure the animal’s vital functions and daily activity like a smartwatch. The US Army already has its eye on smart harnesses, as the vital signs recorded can tell whether the dog is ready for action – and this may be a vital issue in combat situations.

According to Gyula Sebő, one issue is that registering a patent may take up to five years, but technology advances much faster, therefore there is often no time to protect ideas. Although they constantly fight against knock-offs even with their products being under perfect copyright protection, the global online market causes them constant grievances and losses. They have a specialised team that fights websites that offer fake Julius-K9® products daily. In China, where the fakes are manufactured, the company’s lawyers have raided multiple companies with help from the authorities.

Along with all their successes, the company started to become similar to a multinational organisation – but Gyula Sebő does not believe in a “replaceable” workforce. He did not want a company where “the numbers were good”, but employee turnover and restructurings were constants as people got used up in the drive for profit. Employee well-being became a priority: they evaluated what individual employees needed to improve their work environment, or even their quality of life – some needed help with mobility, and many needed treatment for sleep issues. As the company executive who also reformed HR management put it, the point is to make sure that time employees spend at Julius-K9® is thought-provoking, and that they receive input that provides help or solutions, even to private life issues.