In competition and in alliance with global brands - Roland Divatház Zrt. - Bet site 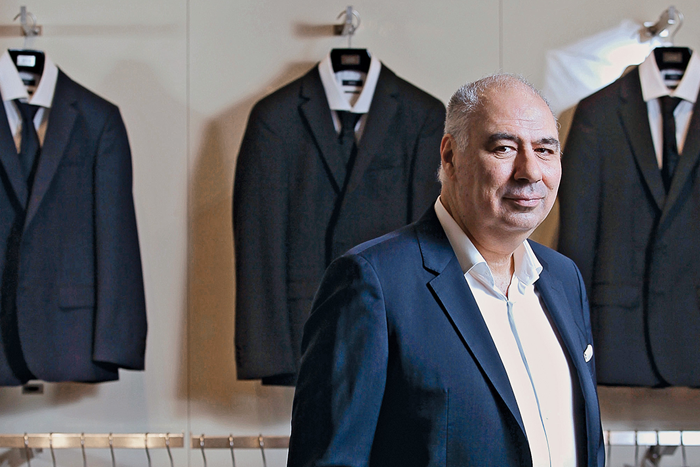 Selling global brands represents both prestige and a complex challenge. This is especially true of the fashion company Roland Divatház, which serves as the Hungarian representative of 15 global brands besides having their own brand. High-profile visible changes and clearing the brand portfolio have served to not only maintain profitability, but their shop network is also expanding continuously as a result and even an IPO may be “in the cards”.

András Berendi had originally trained as an engineer, but soon showed signs of having business acumen. It thus did not take much doing for his fashion dealer father, Péter Berendi, to convince the university student to try his hand at manufacturing clothing. It was at this time, before the regime change, that they started building a network of manufacturers in Hungary, using HUF 100,000 of capital from the father who was working in Germany, and using his business contacts, but under the son’s management.

The boy’s university friends lent a hand, transporting materials and the finished products with their Soviet Zhiguli cars. They sewed the first sample tie with German materials after disassembling and copying one that had been carefully saved by Grandma since the 1930s. As a bit of trivia: the company is named after a tie. The products of the small manufacturer were distributed by Módi fashion house, where supplier items are given names and numbers. At Módi, the most successful product was called Roland 2812.

After a couple of years, they outgrew the tie business, or more precisely, Asian competition made their plan to build the biggest European tie factory in Hungary impossible by the late 1990s. Their Italian and Dutch partners declared bankruptcy.

In a bit of good timing, it was then that a suit factory looking for investors knocked on their door. They bought the factory and made more acquisitions later. As András Berendi puts it: “in this case, it was not the big fish that ate the small one, but the fast fish that ate the slow one.” Today, the enterprise has five stores on Budapest’s Fashion Street (e.g. Hugo Boss, Tommy Hilfiger), and they sell clothes in 28 stores around the country – but let us not get too much ahead of ourselves.

The roots of the company go back more than 30 years. Regardless, they started developing their own brand of suits, in parallel with their ties, starting – as the founder tells it – with absolutely no skills or knowledge of materials. Their first suit was made in 1992. Already, they were working with renowned designers such as Lucia S. Hegyi and Tamás Náray. The first series was not called Roland, but Héder-Palik, based on a franchise contract with two famous Hungarian sports reporters. The idea was hugely successful. After the licence for the reporters’ names ran out, the labels started to bear the name Roland.

After these early successes, they started distributing the famous Hugo Boss products in 1998. The next year, they purchased the McGill suit factory, and later, the Kaposvár garment factory. Soon after, they purchased the Aramis and Mexx networks, which became the core of today’s company. Afterwards, major international brands were lining up to partner with them. For a while, they represented almost 30 brands, but this was hard for both their internal processes and customers to keep track of, so they decided to thin out their portfolio a bit. Indeed, it was impossible to meet the often differing demands of all the brands at once. Accordingly, today they are “only” distributing 15 brands, including Hugo Boss, Tommy Hilfiger, Calvin Klein, and Marc O’Polo.

As mentioned above, at the turn of the millennium, Asian competition destroyed their hopes of manufacturing, therefore today, they focus on distribution, while production is not a significant part of the company group. At the same time, the great challenge of the new millennium lies in developing different strategies for distributing their own brands and international brands. “Roland is not for young people – it is business and formal wear. All we have to do with this brand is to market a perfect product with good value for money”, says András Berendi. At the same time, with foreign brands, they have to follow the brand’s policies. Thus, brand representation has both benefits and drawbacks. Its benefit is that they do not have to develop a strategy and build up the market and the brand, as these aspects are handled by their partners. Its drawback – expanding upon the above – is that the efficiency of various marketing tools and Hungarian consumer behaviour vary considerably, even compared to other countries in the region. However, the distributor has no say in these areas, as the policies of the brand owner must be followed. Therefore they ended up having frequent arguments with foreign partners to convince them that Hungarian consumers “function” differently than they do in, say, the Czech Republic. Marketing tools that are effective there may be much less so in Hungary.

“When I tell them which marketing tools we have used successfully, I usually get surprised looks. For us, a television presence is the most effective platform, followed by clothing endorsements and direct marketing”, says the CEO. It is due to this strategy that Roland became as well known as Hugo Boss in Hungary. “Many companies are not willing to get involved in product endorsements, while we gave out suits from day one”, added András Berendi. Consequently, new contacts developed, and now, their clothing items are seen on virtually all TV channels. They even advertise in local cable channels in the areas where they operate stores. This takes up a huge amount of work and money, but it is worth it, according to Berendi’s assessment of the marketing strategy. The result of this work is that the formal attire for numerous major corporations as well as the Hungarian Olympic team have been made by Roland Divatház, and they also work on the formal wear of state organisations.

Current market trends indicate that the premium segment is growing; at the same time, Hungarian customers are also developing a need for exclusive attire. However, compared to richer countries in the region, we still have a long way to go, and despite growth in the Hungarian economy, few premium international brands are present here. That being said, the trend is clearly positive.

The enterprise has grown steadily and dynamically despite many crisis points: the change in profile, the reduction of manufacturing, store network changes, and profitability challenges. This year’s plan is also impressive: the network will grow by one new store every six weeks. This can be achieved due to stable management and a very efficient and flexible decision-making process.

As to whom they still consider competitors, the CEO says: everyone, including producers of fake brands on the Chinese market. If managers of major corporations would finally make up their minds to have their employees dress up, that would mean a lot for the premium segment, he adds.

Naturally, the company is hard hit heavily by the labour shortage, they “sacrifice” their TV spots to recruit sales clerks instead. Meanwhile – unlike fast fashion stores – they are not looking for 20-year-old girls, but for experienced professionals well versed in formal wear, and they are able to pay their employees well, as the financial situation of the company is stable.

Although revenues have not increased in recent years, András Berendi emphasises that they have achieved this result with half of their original number of brands, in the name of continuous rationalisation. The result of this conscious increase in efficiency is that their EBITDA and equity increased while their debt decreased. With their stable background and fulfilment of the transparency criteria, the company may even consider going public at some point in the future. But it is not only this dynamic expansion that gives cause for optimism, it is also the determination with which Berendi manages the company.

Three generations participate in the company’s operations: along with András Berendi and his father, András’ daughter Szonja also works for the company, directing one of the most important divisions. Thus, intergenerational succession seems to be shaping up nicely, although the CEO knows that it will not be easy. He even notes that only one-third of generational successions in family businesses are successful. The rest either go bankrupt, or are sold by the next generation. He believes that the most important thing to ensure that children continue the family business is a lot of luck.

As the executive says, they are praying for the young ones to understand that they can change the world here in Hungary as well, and they are hoping that they will eventually choose the family business. “We cannot force the issue though, that would only make everyone miserable. My daughter started out as a sales clerk, then a stylist, she always did extra training outside of school as well, picking up everything there was to know about fashion. We didn’t plan for her to advance this quickly in her career, but our brand director left unexpectedly, and she was given the chance”, András Berendi relates. His son is still at university, and is interested in sports management. The family are not only hockey fans, but also one of the owners of the MAC Budapest team, the Hungarian ice hockey champions.