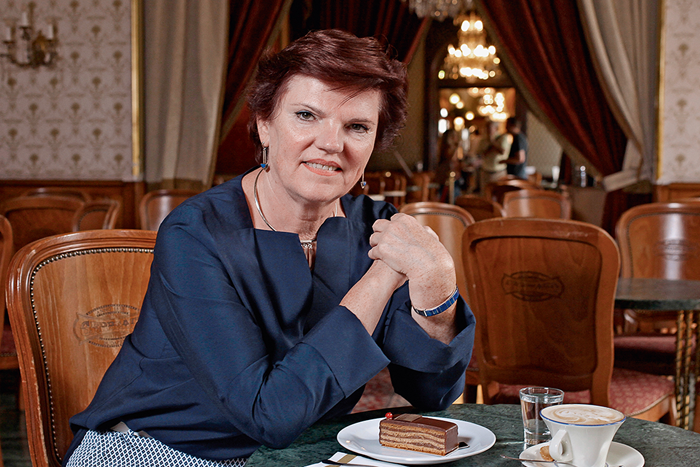 It was at the turn of the millennium that Katalin Pintér took over management duties at the renowned Gerbeaud café. Breathing new life into the somewhat neglected enterprise, the catering expert went on to open Gerbeaud cafés in major cities around the globe. Also owned by the company are Onyx, a restaurant that earned two Michelin stars, and Émile on the Buda side of the Hungarian capital.

We met with Katalin Pintér at Vörösmarty Square, in the elegant Gerbeaud Gold Salon. Of course, we also sampled some delicious hot chocolate along with some truly outstanding ice-cream sundaes. The latter are of course miles above the ice cream sold in supermarkets, while the classy salon is also affordable, considering the location, the brand, the milieu, the flavours, and the Western level of quality.

Katalin, the owner-manager of Gerbeaud Gasztronómia Kft. has been managing the renowned establishment for 18 years – in what is basically a family business construction – and the company also operates Onyx, the first two Michelin star restaurant of the region. In addition, there are Gerbeaud confectioneries in Tokyo and Seoul, and the Émile restaurant in Buda also belongs to them. In Budafok, they own a modern, 1400 m2 confectionery factory. Currently, the company group has more than 220 employees. Katalin’s family not only owns the company, they also participate in its everyday operations. Her daughter Anna performs managerial roles, her son Attila deals with back-office IT and engineering aspects, while her husband Miklós is a gastronomical advisor.

“Our business model is not complicated: you simply have to offer good, well-made products”, says Katalin Pintér. Of course she pours endless amounts of work into all this, and simply radiates a sort of conservative, elegant perfectionism reminiscent of the owners of such establishments at the turn of the last century, as portrayed in films or books. When we were there, she was firm but also kind and respectful when giving instructions to her employees, in the style of a good confectionery owner.

According to Gerbeaud’s manager, history and tradition do not equate to an absence of change, or that everything is perfect the way it is; menus are not set in stone. “If we gave people the exact same thing that people ate 160 years ago at the opening of Gerbeaud’s predecessor, Kugler, we would end up having to close shop pretty soon”, notes Katalin Pintér. While tradition naturally requires them to keep up the high quality that customers expect, she goes on to point out that what made the café/confectionery in the heart of Budapest famous was the continuous innovation of Henrik Kugler and his successor at the end of the 1800’s, Emil Gerbeaud. They not only offered the best quality, but also introduced special innovative aspects – indeed, today we would say that they were the most successful innovators of their age.

Naturally, the 160-year-old success story also includes some almost incredible stories of survival, including nationalisation after 1945, and privatisation after the regime change in 1989. Luckily, the family that owns and operates the business today really cares for the business. Nonetheless, it was under quite unusual circumstances that the renowned confectionery and café found itself back in Hungarian hands.

Katalin Pintér has taught at both the University of Economics and the College of Catering, but is not only a theoretical expert: she has also worked in the hotel industry, both in Western Europe and the United States. In Hungary, she managed the investment of the Röjtökmuzsaj castle hotel. She has also provided consulting on Austrian golf course projects, and managed projects in the Vienna hotel industry. At an Austrian professional event, she met a manager of the Müller group, primarily known in Hungary for its drugstore chain, who complained about the challenges of managing the Gerbeaud confectionery in Budapest.

Katalin could not believe her ears: so many issues with such a renowned place, and the repeated word “catastrophe”? Because of her experience, she was asked to set things right as manager. The main challenge was to create a quality selection of products and to build the foundation of their good reputation. Katalin had to fight the Vienna centre on many issues, such as purchasing more expensive raw materials. After working as the managing director for two years and making many long telephone calls, Erwin Franz Müller, the leader of the family business that employs 34,000 people and has revenues around EUR 3.4 billion, offered her to buy the rights to operate the company. Regardless of their good professional relationship, Katalin was shocked to hear of the initial costs. But Mr Müller, who had become a sort of mentor to her in the meantime, encouraged her, and she got into the business along with her family. Taking out mortgages on their own homes, their parents’ homes, and even the home of an aunt, they bought the operating rights, the share capital, the assets, and the basic equity from the Müller group, with whom they have a contract until 2025.

However, the real work was only beginning. The renowned name had to be dusted off, and quality had to be improved. Luckily, the group was a good partner, and even helped the management buyout by providing their financial guarantee. In the end, the agility and determination of Katalin Pintér did bring about the required results. Onyx opened in 2007, while the Gerbeaud franchises in Tokyo and Seoul opened in 2009 and 2014. The new operator had to struggle with cultural heritage conservation and maintaining standards of professionalism and quality at the restaurant. But it was all worth it: Onyx was less than four years old when it received its first Michelin star, while the second followed in 2018. This helped put Hungary on the world’s gastronomical map, as did the Hungarian part of the Bocuse dʼOr competition, that started from Gerbeaud. As one of the biggest supporters in the early days, the company earned a distinguished place in the gastronomic development of the country. Of course one might think that a luxury restaurant is a huge cash cow, but the manager concedes that Onyx operated at a loss for the first 3-4 years, and although it is not loss-making any more, it has barely made back the cost of investment. While their meals are expensive and they can host 45 guests, they have almost as many employees – all of whom are very well-paid. Some of the fish costs HUF 16,000 a kilo, a small tub of caviar can cost up to HUF 18,000, and the ingredients must always be fresh. Therefore the confectionery, which can seat many more guests, is substantially more lucrative.

In late 2016, they took over, reorganised, and operated the F&B field of Aria Hotel in a unique project agreement. The owner was happy to take back the new, successful concept they had built up after a year and a half. Thus the number of the group’s employees has dropped to 220 from 300, but the manager does not mind it, as in the luxury sector, quality has always been more important than quantity. In the future, they intend to open new Gerbeaud establishments, but for now, Katalin does not disclose any details.