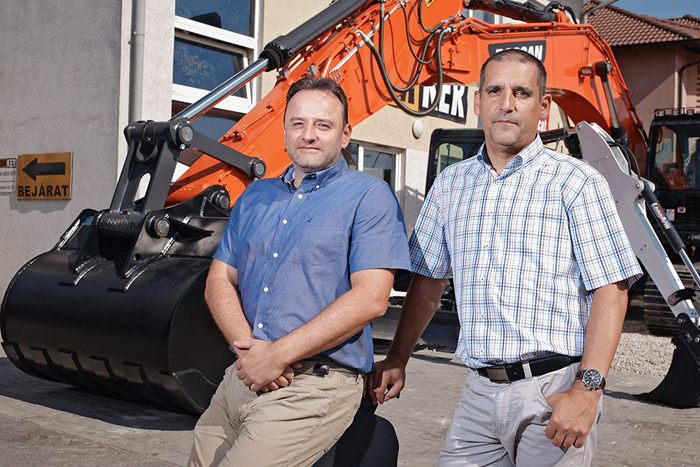 The most important goal of DM-KER Kft. is to increase its share on the market of agricultural machines, besides its major position on the market of construction machines. In addition to the sales of machinery, the company has gained its prestige through the sales of high-quality parts and servicing, and sees its revenues growing dynamically each year.

The two owners, Sándor Megyeri and Ferenc Bátor, first met in 2004 when they were colleagues at a company with a profile similar to that of DM-KER. Ferenc Bátor then left the trade for a few years, after which Sándor Megyeri invited him to join DM-KER, which had already been running for two years. “I had two conditions to say yes to this invitation: I wanted to become a co-owner and have a managerial position”, the managing director tells us. His wish was fulfilled, so they began making the company stronger in 2010, during a period when the crisis was unfolding quickly in Hungary as well. As businesses cut their investment spending considerably, DM-KER shifted its focus to renting and selling used machines. The military background of Ferenc Bátor ensured that the company would be well-organised and based on the principle of precise functioning. He told two versions of the story of the origin of the DM-KER name. One says that the DM name comes from the initials of Sándor Megyeri and of the former co-founder. Another “legend” has it that they remembered the beginning of the company with this name: Sándor Megyeri ordered the first parts to be shipped to his own flat in Gödöllő, a town near Budapest, and there was a “dm” drugstore under that flat. By mistake, the parcel company wanted to deliver the huge equipment to the drugstore. “It was so large that they did not even know where to put it”, Ferenc Bátor tells us.

They went to the largest exhibition of agricultural machinery right in the first year they spent together; however, the large manufacturers still were not interested in them. In the same year, they received an invitation to represent – albeit through an Austrian intermediary – the Doosan and Bobcat brands, which held 50% of the global market. From this year, they were officially in contact with these manufacturers, and they have been representing and servicing Doosan and Bobcat machinery since 2011. The Hungarian dealership sold 27 machines in four months, and has gone on to sell hundreds each year ever since. The Austrian management, however, misled the brand-owner and manufacturer, but they only found out about this at a much later stage. When the Austrian dealership did not perform as expected, the representatives of Doosan screened the dealerships, including DM-KER. It was partly for this reason that the Austrian company filed a petition for bankruptcy in 2014. Ferenc Bátor and Sándor Megyeri, through great hardships, succeeded in buying them out from DM-KER. “It was basically from this point onwards that we could breathe freely and that we could work for our own success. In 2015, we became a Doosan dealership, with direct contact to the manufacturer”, said Ferenc Bátor. They serve their more than 5,000 clients at the four sites of their countrywide dealership network; they are among the three largest construction machinery dealerships in Hungary, but they are also among the seven or eight largest agricultural machinery dealerships.

The company has been selling tractors since 2012; the reborn Italian Arbos became their official partner in that year. They have been selling the road construction machines of the Swedish Dynapac since 2014, and have been offering the Italian Sorti feed mixing and spreading trucks since 2016. That was the year when they added organic fertiliser spreaders and plantation sprayers to their range – an important step in their penetrating the agricultural machinery market.

The company – a small enterprise of three people in 2010 – now has a headcount of 60, and sells and services machinery for construction and agriculture. Their first employee has been working with them ever since. “The key value of DM-KER is that it is a dynamically developing, energetic company that inspires others as well. Our employees also embrace these attributes, and these are our greatest virtues”, says the company manager. They offer career-building opportunities, but as the two specialists said: they are still missing the level of strong middle managers. As they say, there are people who would be competent in such a position, but they do not want to take it, and there are others who would like to get such a position, but they are not ready for it. “DM-KER is strong, quick and agile – just like the Bobcats, which is why this type of machinery was named after the lynx in 1962. This is true for the dynamics of our development and the position we reached on different markets within a very short time, but also for our everyday life. We must be fast in arriving to a service location, because if a machine stops during the harvest, it must be repaired immediately. This kind of equipment is difficult to transport, so we go to the service site with a wide range of parts and a large toolkit”, explains the manager. “We also have to be agile, so that we can keep on being the best among our competitors.”

The company, which is turning ten years old this year, is giving every co-worker, in recognition of and honouring their work, a holiday at the Adriatic Sea (in different rounds). After the significant wage rises of the previous years, this measure aims to retain the workforce. “We could not always be so generous. In our first years, sometimes we did not pay any wages for ourselves. We had to reinvest everything”, remembers the owner and managing director. 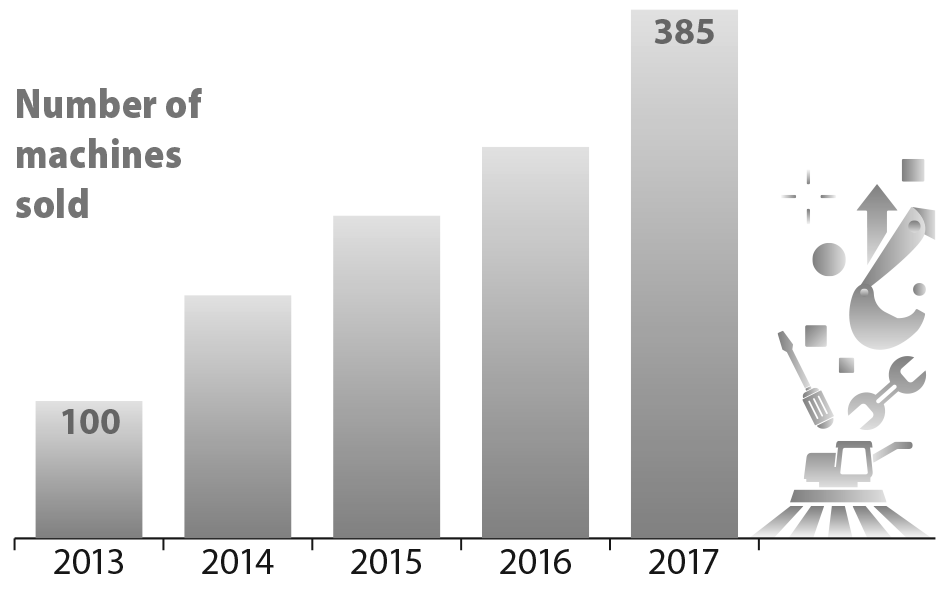 The company now generates annual revenues of HUF 6.5 billion. One of its goals is to increase the sales and servicing of the machinery it distributes in the surrounding countries as well, but this needs extra funding. “To do so, we need to further guarantee the transparency of the company; we have to introduce business processes that allow us to invest into the company. This will enable us to open up to new markets”, explains the specialist. After the developing trend seen in recent years, they expect a two-digit revenue increase this year as well. This is supported by the fact that so far this year, their turnover was 25% higher than in the same period of the previous year. The managing director sees another opportunity of expansion in the distribution and servicing of agricultural machines. “We focus on servicing and on supplying spare parts, because we can serve our clients as an authorised representative and as a brand-independent repair service as well. When we sell a new machine, work is guaranteed for three years. And we’ve sold a lot of machines over the last few years.” To lay down the foundation for future growth, the company is building new sites and will also expand its headquarters. They will move a few kilometres away, into a hall larger than 2,000 m2, where the offices will be in the new main building. They will build a new site in Tiszafüred, partly from EU subsidies.

To ensure transparency, they developed an IT environment that includes a modern ERP system years ago. This allows for high quality work in every team – whether a service, sales, or even a finance team. While Sándor Megyeri is more familiar with sales, Ferenc Bátor is responsible for the strategy, business development, and management. The company has a separate operative manager, Zita Tóth-Csanádi, who also has the title of company manager. She had to be involved so that the owners and managing directors could focus more on business development and the future. In addition, they want to separate owner and management tasks, so that they can make DM-KER into an independently functioning medium-sized business.