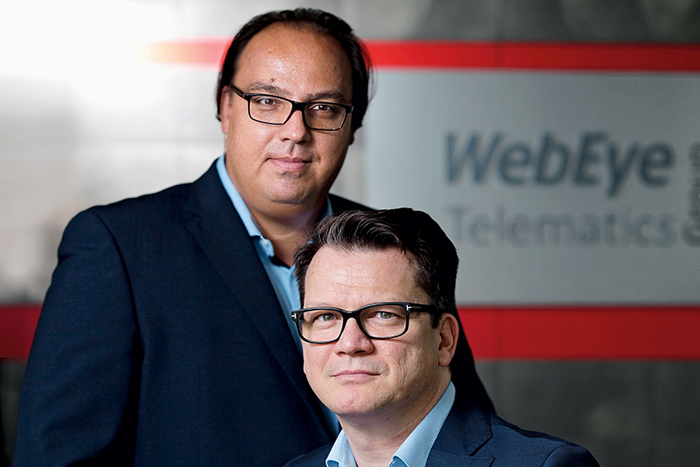 Though the founders of WebEye Telematics Group are not related to one another, in their early years, they ran the company as if it had been a family business, making all decisions unanimously. Success did not turn the leaders into enemies, they have been working in harmony ever since.

The company, founded in 2001, became a market leader in Hungary in only seven years. The founders, most of whom are engineers, have developed a fleet tracking system that is now capable of not only determining and displaying the exact location of the vehicles on a digital map, but which can also monitor fuel consumption, process tachograph information and operating hours. The application automatically records mileage, amongst other functions, and also assesses driver performance. This means that they have created such complex telematics applications that allow carriers, freight forwarders and logistics partners to organise their work processes more efficiently.

Their reliability and the price-performance ratio offered by their services meant that they were able to conquer the Hungarian market by 2008. They almost did not need any salesforce: logistics companies were so enthusiastic about WebEye that prospects were flocking to their offices.

After gaining a foothold on the Hungarian market, their next big step was conquering international markets. At the beginning, existing partners contributed a lot to their expansion. They had Austrian clients who asked WebEye specifically to set up installation points outside Hungary’s borders. Though they have subsidiaries in Germany and Portugal, their primary focus is still the CEE region, for a very logical reason. In our region, they are present in ten countries, with the main markets outside Hungary being Romania and Poland. The reasons for this are quite unique, as in this region, they do not have to deal with any major Western competitors. Logistics is a business that is expanding so quickly in Europe that British or German corporations do not really need to expand towards the CEE and do not really have the capacity to do so. Another reason is that road haulage in Eastern Europe is an extremely fragmented market, dominated by a multitude of SMEs, as opposed to Western markets, where large logistics corporations are dominant. It would hardly be an exaggeration to say that dealing with orders from Poland, Slovakia or Romania is not worthwhile for Western multinationals. WebEye, which follows the “little streams make great rivers” principle and adapts to the market structure of the region, is ready to do business with even the tiniest of enterprises and to offer them a comprehensive range of services. Though some of their clients have hundreds of trucks, they also have ones with two or three trucks, while the average fleet size per client is somewhere above ten.

How successful can such a business model be? It is enough to mention some expressive figures: the company that had only five colleagues at the beginning grew to a business of 150 by 2011, and today, their headcount is well over 300. Their turnover increases at an annual rate of 15% while they have about 5,000 business clients whose more than 63,000 vehicles run with WebEye services. It of course took some time until they built up a sufficiently efficient international network: they realised in the meantime that they do not need a separate management team for every market. This Hungarian-headquartered multinational company serves twelve countries from four regional, so-called cluster centres by keeping product development in Hungary.

Foreign subsidiaries now generate about 50% of the turnover, but they want to increase this rate above 80% in five years. Poland has the greatest potential, particularly because it has the one of the biggest logistics markets in Europe.

WebEye Telematics Group has a considerable strategic competitive edge because, in contrast to other telematics multinationals, it encompasses the entire value chain. Rather than merely manufacturing the units and developing the core software for the service, they have built up a very efficient sales and marketing organisation and provide assistance with the installation and the best possible exploitation of the opportunities available through their services. They have, for example, assigned a permanent associate to one of their largest partners, Waberer’s, whose full-time job, as a dedicated service manager, is solely to support the proper use of WebEye on the spot.

Their clients are extremely loyal, and the company also believes in strategic cooperation: they sign contracts for at least 24-36 months, but 60-month contracts are also common, and most of their clients have been with them for over 10 years. This is because their services become so highly integrated into the business processes of their partners that a change of provider would entail a lot of extra costs and imply operational security risks – not to mention that cheaper alternatives can be less reliable. Thus, clients reward the unique robustness, service-readiness and accountability of WebEye with their loyalty.

As for its organisational structure: after the company started to build up its network in Central and Eastern Europe, the owners had the foresight to realise that it was time for them to withdraw from the management of the company, and handed over the reins to seasoned professionals who had worked in top executive positions at multinational companies. This is how Pál Németh, the current CEO of the Group joined the company from G4S six years ago. Now Chief Commercial Officer, Levente Tóth had been the business sales and marketing director of Telenor for many years. In addition, they hired the former IT director of Magyar Telekom as the head of their R&D department. The owners, however, have not completely dropped WebEye: they still participate in innovation, software and hardware development. They have, however, considerably reinforced the developer team, hiring many professionals so that the company can run and develop without them as well.

The management has been planning to go public for a year, and have begun preparations to this effect. If everything goes well, the IPO will be in 2023. They plan to transform the company in the coming years accordingly, making their operations more transparent. Partly to this end, the company will become, after a vertical fusion, a private joint-stock company still this autumn. They want to further increase efficiency in the meantime: by 2020, they will have implemented a new ERP system to meet international standards. To strengthen their position and to stay on a track of dynamic growth, they are planning to acquire smaller, primarily foreign companies that are also active in this region. The management expects that the headcount will nearly double in five years, while their sales revenue will be more than the double of the current one, and the number of active end-points might even triple.

They have ambitious plans for their products as well: in the future, their developments will be available not only for trucks, e.g. lorries and semi-trailers, but for smaller vans as well.