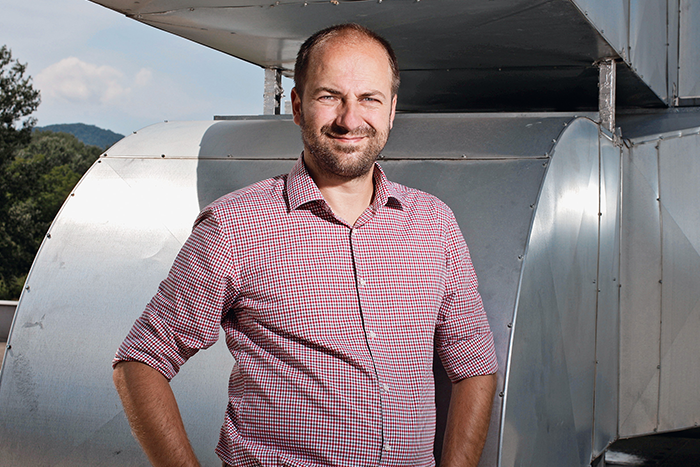 Air conditioning, air technology, and energetics: these are the three areas in which Lenergy Magyarország Kft. has become one of the most successful Hungarian businesses in a little over five yeas, boasting revenues of HUF 3.5 billion and 54 employees. Their plan is to keep expanding.

“Our employees see me, give me a hug, and show me photos on their phones of their new kitchen cabinets”, says Péter Gaál, speaking of the mood at his workplace. Managing Director of Lenergy Magyarország Kft., he almost moved to Finland seven years ago. In the end, his love for the profession, enterprising spirit, and love for his country won out. He decided to stay in his homeland and along with six friends, founded Lenergy Magyarország Kft. – now with revenues of HUF 3.5 billion – in January 2012. The industrial air conditioning, air technology, and energetics company that started out with nine people now has 54 employees.

Péter Gaál earned his degree as a building services engineer and physicist in Pécs (Hungary) in 2002. After graduating, he had only one other job before Lenergy, but change was inevitable. He went to Finland for two weeks, where he explored opportunities in the air conditioning market, and became so enamoured with the country that he wanted to move there. In the end, instead of the Finnish plan, the management of Lennox called Péter Gaál. The decision to found a company took shape, and the co-owners sold all their available assets in order to finance the new company.

When asked about the circumstances of starting the company and any hardships, Péter Gaál said that over the first few years, they put everything back into the company. “Those were such hard times that I am not sure I could do it over again, but all in all, I never regretted it”, he recalls. “The market was very sluggish in taking off again after the crisis. We have been sensing a change since 2016, and have also seen our most dynamic growth in this period”, he said. The vision of the founding owners to provide a comprehensive range of services in their field has now become a reality. They offer various solutions in the air technology and energetics segment through their subsidiaries.  Among Hungary’s neighbouring countries, they have been present in Slovakia for years, and this year, they will also start operations in Austria. They are not planning on sitting on their laurels over the next three to five years either: their aim is to make their Hungarian company stronger and the Austrian subsidiary to be launched this autumn profitable – all while maintaining stable operations of the Slovakian subsidiary. The smaller companies of the group, such as recent addition Green Energy Kft., account for hundreds of millions of forints and are operating in acquisitions and related implementations. For example, they recently airlifted a machine into a Hungarian shopping mall by helicopter. Another one of their investments was the installation of a “green” solution, a geothermic well, and they have also installed devices in shopping malls, restaurant chains, and sporting goods chains. Although they are the exclusive distributors of Lennox and DECSA products, they also operate a nationwide, general service network spanning all of Hungary: besides Budapest, they also have sites in Pécs, Szeged, and Szabadbattyán (see the infographic). After planning, sales, and if needed, installation, they also perform machine maintenance, repairs, and energy-saving modifications. They are able to submit comprehensive bids for any calls for tenders for state funding programmes.

Péter Gaál, who also owns 51% of the company, says that it is driven by values of respect and friendship, and that they do not typically have hierarchical relationships. “Sometimes we even spend weekends together, and often do recreational activities together”, he says. The words of the manager are supported by the fact that they reward employees with ownership in the company. Regarding employee turnover, he said that four people have left the company in total, and two of them have already returned – from abroad. “I’ve realised that it’s impossible to manage a company without emotions. We have to treat employees in a way that makes them want to stay, even if there is no fence to keep them here”, he says.

In response to our question as to whether he has any regrets, he says that he has none whatsoever. “Of course we made mistakes, but without them, we would not be where we are today. We need failure to be able to make a better decision at the next step, and to become successful”, says the 39-year-old, one of 50 Hungarian entrepreneurs listed by the Role Model Foundation (Példakép Alapítvány) in 2014. He thinks that everything happened for a reason, and he is proud of having made and making the right decisions, both instinctively and consciously, with regards to both employees and partners. Although they never trained in management or leadership, they have succeeded in motivating their employees to give it their all. “In the first few years, and especially in 2013, with 25-30 employees, half a billion forints of income, and a hundred million in loss, we had to be very alert in order keep everything on track”, he said. In the end, a patent for their own special shade contributed to their fast development. They could sell them in large volumes, which made up for losses quicker. With this device, machinery can continue to operate properly even with high outdoor temperatures.

The manager believes their specialty is their ability to react to the needs of partners as fast as possible, making their service operations among the best in the country. This may be their biggest competitive advantage compared to their two competitors with similar profiles.

The company is conservative when it comes to finances: they never allow their cash reserves to drop below a certain threshold. “We try to be flexible in everything. If the customer says they can only pay in half a year, we can deal with that, we just need to discuss it beforehand. Also, we try to think about long-term investments”, says Péter Gaál.

Social responsibility is also important for the company: they support Hungarian nature parks every year with the Magical Hungary photo contest. They organise an exhibition of the best pictures in the Hungarian Natural History Museum, and the foundation publishes a book every year – supported by, among others, WWF Hungary – that has won the Best Hungarian Product prize.