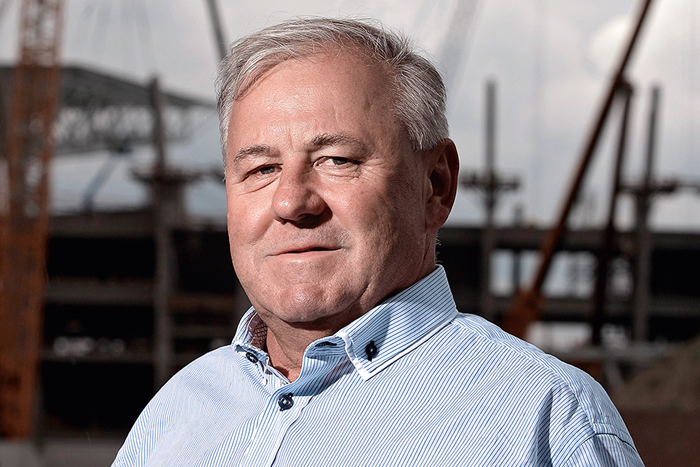 Great challenges have the power to bring people together, and according to the founder of the KÉSZ Group, there is no task so tough that it cannot be solved. For over 36 years, Mihály Varga has been leading one of the largest and most versatile construction groups of Hungary with unbroken optimism and enthusiasm.

Manufacturing steel plates for roller coasters, the SkyCourt at the Liszt Ferenc Airport, the renovation of Kossuth Square, the main location of the 2017 Fina World Aquatics Championship, the steel structure of the Dagály Swimming Arena, the Mercedes Factory in Kecskemét and an active presence in more than thirty countries are all drawn from the extensive portfolio of this Hungarian group. We must also mention that there are not many construction companies that have their own fleet of ships or vocational secondary school. In the opinion of Mihály Varga, the key to their success has been, in addition to sound professionalism and experience, their flexible and forward-looking mindset, which is not typical for the industry. Besides construction technology, however, hotel management or real estate development have found their way to the Group’s portfolio as a necessity at the beginning. It sometimes happened that a client could not pay for a project, so the company would “earn” ownership rights, development and operational tasks together with the building. A good example of this is Cluj-Napoca in Romania, where they started a hospital project but finished it as an office building; now, they are planning to set up a start-up centre in it.

The story of the KÉSZ Group started as a family business in 1982. These were the ancient times, as Mihály Varga puts it. At the time, an economic working community, a primitive form of business in the socialist era, was required to have at least one person who had a skilled worker certificate. Thus, he took the exam and got certified as a mason, a fitter, and a carpenter. Every era had its highlights: the 1980s saw agricultural construction projects, food plants, grain and biscuit factories being built. They were the ones who built the factories that later produced iconic Hungarian snacks of that era.

During the global economic crisis that erupted exactly ten years ago, positive mindset and faith in the future were greatly needed. The crisis had a real impact on the Group, Mihály Varga says. They lost more than HUF 13 billion on their receivables, and KÉSZ responded with alternative thinking; they did not focus on the few but safe areas, but diversified their portfolio further, as they turned towards air transport, for example. The construction of SkyCourt, the central terminal of the Liszt Ferenc International Airport, was an important project at the time, because it meant a great step in the recovery. The cooperation with Budapest Airport was so good that they secured another order; currently, they are working with full steam on the new passenger pier that will be opened soon.

The KÉSZ Group has become a prominent international player as well – they ship steel structures to almost everywhere. With subsidiaries in Ukraine, Romania, Russia, and Serbia, they are also permanently represented in Germany, one of their most important target markets. They are also active in Azerbaijan and overseas as well.

They want to use their diverse portfolio to best serve the field of technology, because indoor design works that require special expertise are the most profitable. Whether it is a pharmaceutical plant, chemical plant, automotive or energy plant – the company has all the resources from design to implementation, and even for operations. The Tiszalök National Prison (established about 10 years ago) also belongs to the Group; Mihály Varga sees it, with only a slight exaggeration, as a hotel which, unfortunately, is always fully booked. In addition to the “basic services”, the facility must also provide common meals, education, medical care, and occupation.

KÉSZ is active in Germany, partly to mitigate the current greatest issue of the Hungarian construction industry: the labour shortage. The Group has a strong presence in the most industrialised German region, the Ruhr Region, and will soon open an extended worker service centre, jumping ahead of the main challenge of their field. In addition to accommodations, skilled workers will get various training, such as fire protection here, but they will be trained to work as foremen as well. As Mihály Varga put it, the world has opened up, and we cannot prevent young people from going abroad for work. He added that if somebody is able and willing to work, it is impossible that they cannot find him or her the right opportunity at the company. If, for example, a welder comes to them and has the right skills and can perform well, then he or she will be offered a work scheme shared between an international site and Hungary. This could be a good alternative to the very enticing work opportunities available abroad.

Staying with young people: the KÉSZ Group soon realised that the future lies in education and innovation. It was the first construction company to have turned towards secondary education; its Kecskemét school has more than 50 students who will become skilled workers, while in Szeged, it opened its own secondary vocational school this September. They have a great many other ideas: Following the American example, they envision an edupark, an education centre, and a medipark for the development of the health industry in Szeged. The Group spends 6% of its revenues on innovation. This not only helps the company, but also the development of the entire industry; as is well-exemplified by their in-house developed, open-source steel structure dimensioning system, which their competitors also use, and it is so much recognised by the trade that it was integrated into the curricula of many universities.