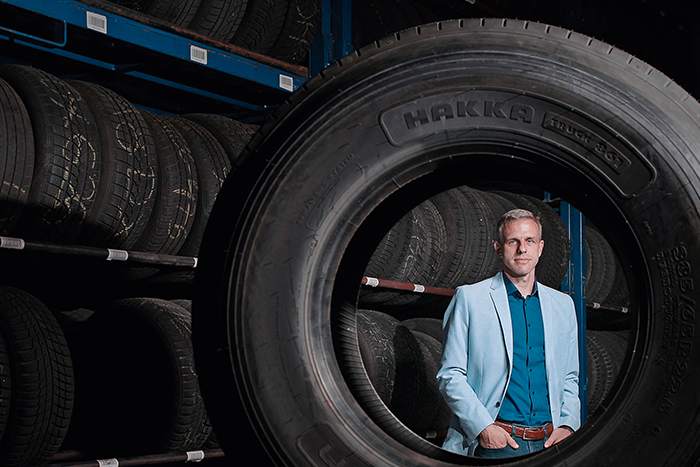 Its highly probable that Marso Kft. is, in some way, the supplier of at least one of the four tyres on every car in Hungary. Starting from zero, this Nyíregyháza-based business has become the largest Hungarian tyre dealer in less than 30 years.

A lucky coincidence and the magical number 3 also contributed to the establishment of Marso Kft. around the political changes in 1989-90. A clear vision, hard work and good decisions were necessary for this company started by three people to grow into a group which now employs more than 300 people in three countries. As Zoltán Becser, managing director, tells of the company’s early beginnings, three of the owners of Marso used to work in the Nyíregyháza factory of Taurus, an old rubber factory, right after a failed deal in 1990. The management of the former rubber corporation did not want to take part in having Taurus agricultural tyres manufactured in the Soviet Union, despite the recommendation of the eventual founders. The relationship, however, proved to be useful for the current owners of the company. They established Marso Kft., reached an agreement with the supplier, and then started to import and sell tyres in Hungary. Their calculations proved to be right, because there was demand for these kinds of tyres, as a lot of tractors, utility vehicles from the East were still running on the roads.

Responding to the market demand, they soon included car tyres in their portfolio. However, they did only conventional wholesaling until 1996, not retailing and servicing. It was, however, hard to cover the entire country from Nyíregyháza, so they decided to expand and established a retail network and partnerships. Their first own shops functioned as regional wholesaling supply centres, warehouses, and they also opened towards retailing: setting up depots as points of sales next to the warehouses. Later, they added servicing to their portfolio; Zoltán Becser, however, says that “the tyre repairers did not like this”, so, especially in the beginning, they paid great attention to not undersell them, because they regarded themselves basically as wholesalers. The balance between wholesaling and retailing has been a core business strategy ever since; currently, 70% of their revenues come from wholesaling, while each segment generates 50% of the price margin.

Since the millennium, servicing has gradually gained a stronger focus, but they only started to seriously develop their network in 2007. The main reason for this was the strong seasonal nature of the tyre market which caused great capacity and labour issues. The strongest months are March-April and October-November, due to the replacement of winter and summer tyres. They wanted to mitigate the effect of these waves by including servicing. They opened their first quick-service workshops and car garages in 2006-07.

Though the 2008 crisis hit the company, it did not leave a deep mark. Although the steeply soaring trend of revenues broke, they took all the necessary painful measures such as cost cuts and layoffs. In hindsight however, Zoltán Becser thinks that the market cleansing effect was good for the industry. That is to say, many businesses of uncertain future, living one day to the other, bled to death at the time, while many well-established, lawfully operating dealerships were able to survive the crisis. Moreover, 2011 was the strongest year of that period for the entire tyre market, not only for Marso. The reduction of manufacturing capacities had caused a shortage by then, so the potential price margin on tyres became considerable.

Around 2010, Marso started to seriously develop its online sales. The fourth industrial revolution transforms not only production, but also sales and distribution. They had avoided it until then, because webshops used wholesale prices, and they did not want to work at cross purposes with their own resellers. The greatest challenge in retailing is still finding the middle way, that is, to find a price that is competitive but does not harm the interests of wholesalers. Instead of focusing on the price and on becoming the cheapest online source, they sought to be the one that offers the best service package and background. Zoltán Becser thinks that customers liked that. They appreciated that they sold from stock, were reliable, delivered on time and had a good, accessible customer service. For years, they were doubling, or even tripling, their online retail sales volume. Half of the volume is sold online in this sector, and the share of online sales is increasing.

They have grown to like the taste of success. “We want to be the number one in a great many fields”, says the managing director. Marso was the first tyre dealer to offer online appointment booking, registered credit card payment, but they also have an innovation in mind that would enhance client experience. They have the ambitious plan to reduce by two-thirds the time they spend changing tyres, from the moment the order is taken until the vehicle departs – i.e. down to 2,025 minutes. They keep their focus on the relevant developments, ranging from efficiency optimisation to the enhancement of client experience.

Family ties are extremely important for Marso. The current owners are the four founding families, and have been working in this business for three decades without interruption. The issue of intergenerational succession has been resolved, as each owner has at least one child working at the company. Today, almost all the young owners have their own separate business units; however, they had to go through the entire company hierarchy to get there. As most of the employees, Zoltán Becser is also part of the old guard. He started as a salesman 21 years ago, then gradually moved up to become the head of the business unit. In 2013, he became a sales director, and has been the managing director for two years now. He believes that the key to good business operations lies in the clear definition of responsibilities and in showing employees a clear “vision” for the future, thus demonstrating that the company knows where it wants to go and how each employee can contribute.

As the managing director sees it, Marso is now halfway on its journey to becoming a multinational corporation from a medium-sized company. Though they have many corporate systems and processes, they still see the traditional values developed in the last quarter of a century and underlying the solid partnerships as crucial.