The Somogyi family from Győr is inspiring in their solidarity. Their stable values and tireless work have formed the basis not only for their 40-year journey from a garage company into one of the largest consumer electronics wholesalers in the country, but also for the company’s more recent restructuring.

It is rare indeed to hear a business success story in which the founder decides to sell the company after more then two decades of successful operations, only to buy part of the business back again after a few years with the encouragement of his family. In 2014, the founder and co-owner of Somogyi Elektronic, János Somogyi decided to take back the reins of the company he had sold seven years earlier. This undertaking came with a significant challenge: he had to completely reorganise and restructure the company that had become loss-making during the financial crisis. Intergenerational succession came to his aid: his eldest son, Zsolt, a change management expert, manages the modernisation of the family business as its executive director.

Television and radio technician János Somogyi became self-employed early, in 1978, in the form permitted by the Socialist regime. He also had a good eye for finding a niche market among the limited opportunities available at that time. He repaired audio-visual equipment used for teaching, such as overhead projectors, tape recorders, and slide projectors. Back then, the required spare parts could only be bought in one shop, which was in Budapest, and 10- or 15-metre queues were typical. It seemed obvious that the town of Győr, more than a hundred kilometres from the capital, could also use a store. They managed to open their retail unit in the city centre in 1981, after a long bureaucratic process – and although their focus has shifted to wholesale, that store is still in business.

After the regime change, the world opened up, and they started importing directly from Chinese and Taiwanese companies that were already on the cutting edge of electronics manufacturing. They still mostly work with Asian partners, who account for 85% of their goods, but also have Turkish, Swedish, and Luxembourgian suppliers. They are constantly renewing their stock of 2,500-3,000 active items, and they introduce 300 to 500 new products every year. As it takes about six months from the decision to import a product until the time it hits the shelves, it is hard to predict trends. The important thing is to have a feel for customer needs. Along with having wide range of inventory, their main strengths are precision and speed: products they ship arrive within 24 hours, and they strive to develop high-quality partnerships based on mutual benefits.

Their sales strategy focuses on reaching customers through retailers, they work with approximately 2,000 partners in Hungary and abroad. The primary function of the webshop they founded later is to operate as an ordering interface for retail partners. They are very careful not to undercut or compete with their partners, which is also part of their agreement with their webshop partners. They also are the strategic suppliers of the multinational companies and DIY retail stores that came in to Hungary in the 1990s.

After their Hungarian successes, they decided to try their luck at the external markets – today, exports make up 15 to 20% of their business. They founded their Romanian and Slovakian subsidiaries in the mid-2000s, as the former is a developing market of 22 million with great long-range potential, and also supply the Czech Republic, Slovenia, Croatia, Serbia, and Bosnia. 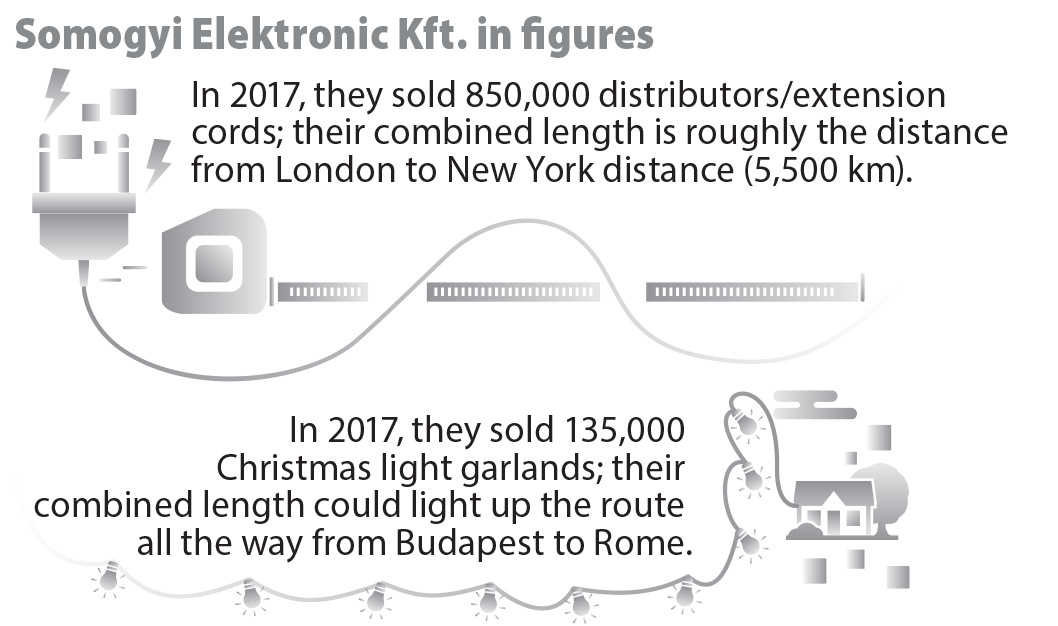 Although business was good, János Somogyi, foreseeing the financial crisis, decided on an exit, selling his company to a group of Hungarian investors in 2007. In the seven years before the buyback, he capitalised on his business acumen in other fields – foreign exchange trading and the real estate business – while his sons studied and gained work experience at other companies. In 2014, when the investor/owner offered the company a buyback option with an increasing revenue, but a negative effectiveness, they gathered the family council and made the decision to do it. The emotional responsibility they felt for the fate of the company and its employees was part of the decision. As Zsolt Somogyi puts it, “we grew up next to the ‘S’ letter logo”. They overtook operative management in a deliberately considered way, buying back 50% of ownership. The elder son Zsolt became the executive director, along with Márta Újvári, who had been with the company for over 20 years. The father helps manage the company as a consultant, while his younger son Tamás Somogyi participates in technical and project management tasks. His wife, Erzsébet Somogyi, provides the stable background that is indispensable for efficient operations.

After four years, it can be said that the reorganisation was successful. The numbers are clear: turnover is increasing by an average of 15% every year, profits are also on the rise (now approximately HUF 800 million), and this spring, they started construction of a new, 2,500 m2 warehouse in addition to their current 7,500 m2 base.

As market trends came and went, their product range also changed substantially over the years. Their strengths include Christmas decorations: many know the Somogyi brand for their lighting solutions, LED light strings, and other decorative products, but they are also very much present in audio technology, having created their own brand, SAL (Somogyi Audio Line). Their other major brand is Home by Somogyi, a brand of household electronics – in this field, smart products are the newest trend. In the summertime, they love heat waves, as they drive up sales of fans and cooling systems, which can total as much as 100,000 units in a season. In the future, they also plan to turn towards young children: they will expand to product franchising featuring Hungarian cartoon characters, including Bogyó and Babóca, Vuk, and Dr. Bubó.

Finding suppliers with good, reliable quality products is hard, says János Somogyi, naming one of their biggest challenges. Even if they have the distribution rights of a brand from the manufacturer, the latter can always decide to develop a European presence and take sales into its own hands, driving prices down, so that they get pushed out of competition as wholesalers. At Somogyi Elektronic, the effects of the labour shortage is also being felt. Regardless, they have managed to take up 40 new employees in various positions since 2014, increasing their total number of employees to 110, even despite the draw of the Austrian market in the region. According to Zsolt Somogyi, there is no big secret to this, all it takes is to treat employees fairly, paying attention to their salaries, incentive system, and communication, besides offering a reliable and attractive career opportunity. They work together for success as one big family.