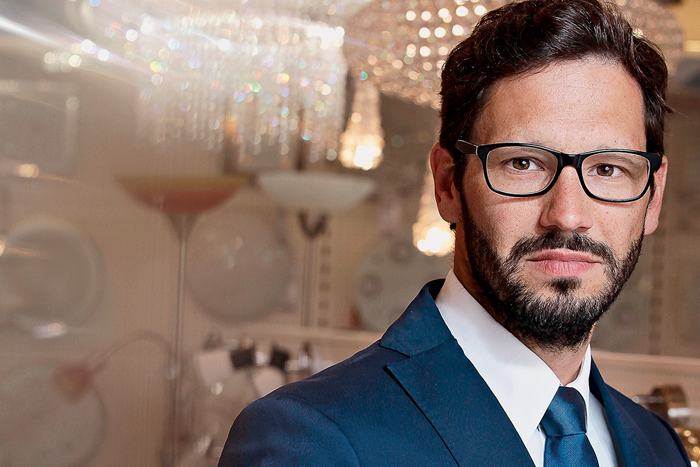 Mentavill started out in a garage. Today however, this Székesfehérvár-based family business has nearly 300 employees and is one of the biggest building electricity wholesalers in Hungary.

After the political changes in 1989-90, building electricity wholesalers were going bankrupt after another. In 1991, Mentavill was among the first ones to fill in the increasing gap in the market. As many other companies, this was also literally started in the garage of the founders, Mr. and Mrs. István Mentes.

As the business was growing gradually, they specialised, and started to focus on retailing. Currently, this sector consists of 600 shops, 400 of which are their partners. As their business model is based on these shops, maintaining good relationships with them is crucial for Mentavill. Thanks to their competence and hard work, they have always grown. After their start in 1991, they moved to their own headquarters in 1996, then, after another five years, they were able to make a major building extension. Currently, they have quite a wide range of products: they offer connectors, distributors, lamps, safety products, domestic appliances, installation materials, modular devices, and tools.

The arrival of multinational DIY shops into Hungary around the turn of the millennium was an important milestone for them, because other outlets could not properly meet the demand. Mentavill, therefore, decided to offer products under its own brand to eliminate shortages. However, their relationship with these DIY chains is mutual, because both they and the hypermarkets promoted Mentavill’s visibility.

They outsourced the manufacturing of their products, first to a Polish manufacturer, then to China. They came out mainly with products that were affordable to average-income customers and generated impulse shopping. They paid great attention to the quality of the products marketed under the Mentavill brand, because an inferior product can easily lead to customer disappointment. Thus, they started to market distributors, cable ties, and T-sockets under their own brand. These are inexpensive things that every household needs. Today, there are Western European electric product manufacturers that market some of their products with the Mentavill logo.

The company now offers 3,000 Mentavill products: switches, light sources, circuit breakers, lamps, and chandeliers. Though the brand is important to the company, the majority of their revenues is still generated by reselling the products of Western European manufacturers. Currently, they offer the products of more than 100 electrical manufacturers.

As they had no major loans, the crisis did not really affect the company. Though their turnover dropped after 2008, layoffs were not needed. Moreover, they were able to acquire several smaller dealerships that were in trouble.

They also recognised that they had to increase client satisfaction in order to survive. They developed a logistical infrastructure that allows them to orders within 24 hours anywhere in Hungary. Today they have 52 trucks, while their modern computer-assisted storage-location management and picking forklifts ensure rapid operations in their warehouse. They have built a separate, closed online ordering system for wholesaling partners.

The company focuses mainly on the Hungarian market; though they are present in the areas of Romania inhabited by ethnic Hungarians, including shops in Timisoara and Targu Mures. They do not want to go to other neighbouring countries (they are already employing 25-30 families in Transylvania). Their primary concern is reaching the highest level of market coverage. To this end, they have begun to set up their own specialised shop chain which currently comprises 22 shops that focus on serving retail customers.

The question of intergenerational succession, a primary concern for companies founded at the time of the political changes in 1989-90, arose as well, though Mentavill solved this issue easily. The son of the founders, Zsolt Mentes, joined the company in 2002 and he took over control gradually. His parents however have not yet left the company: his mother is the finance manager, and his father works on investments and construction projects.

Though it has sometimes happened that, due to their size, others have wanted to acquire Mentavill, the managing director has made it clear that they do not want to sell the company. To remain independent and strong at the same time, they joined IMELCO, an international purchasing and marketing group of electrical wholesalers. This organisation has helped their professional development, because it has allowed them to learn from the experience of several international companies like them.

When asked about the secret to success, Zsolt Mentes says that, in addition to speed, reliability, high quality services, and human relationships are also important. They have good relationships with both their business partners and their own employees. Though Mentavill has a headcount of more than 300, they have kept their family atmosphere, which keeps employee turnover low. The company has been recognised many times, they won the Superbrands Prize five times and the Hungarian Brands Prize seven times.

As for the future, the management expects that there will be major changes in the market on the long run and that the e-commerce boom will greatly affect sales.