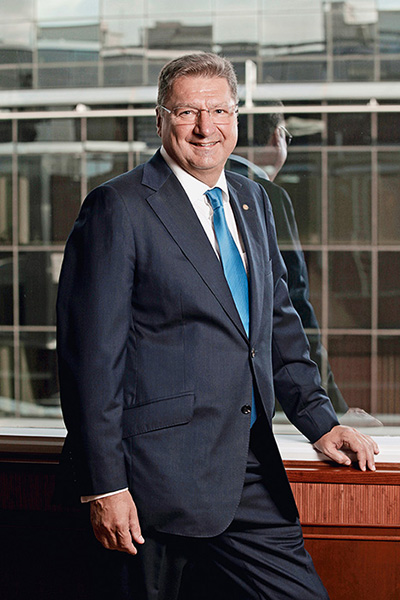 “We consider digitalization one of our top priorities; we operate multi-billion forint programmes in this field. It was our idea to put at least 60 percent of EU funding into the economy,” says Dr. László Parragh, president of the MKIK.

Which of your services are you most proud of?

I tend to use the word ‘services’ carefully, and I would rather say that as a network we conduct activities with our 23 regional chambers of commerce and industry which help improve businesses’ competitiveness, provide a healthy economic environment and ensure sustainable economic growth. We also play an active role in training. In cooperation with the Ministry of National Economy (NGM), we pay special attention to professional training, including the content of teaching materials. We also identify professions experiencing labour shortages and the training needed to remedy this trend and organise exams. We operate the entire master training system. In addition, we consider the digitalisation of the economy a priority and coordinate multi-billion forint programmes in this field. We cooperate on the distribution of EU funds, such as those received for TOP-programmes. What’s more, it was our idea that at least 60 percent of the funding received from the EU should put into the economy. We have an ownership share of 50% in the Széchenyi Card scheme, which so many people like and use, and we also operate the programme. We participate in business arbitration and maintain an export registry. It is thanks in part to this broad set of tools that we hear far less frequently today of circular debt than we did some years ago. In 2010, we reached an agreement with the government on getting the Hungarian economy in order. Together with our team of economists, MKIK GVI, our research institute, is an important tool in this regard.

What is the ‘hottest topic’ in 2017 from an economic standpoint?

The Hungarian economy is in far better shape today than it has been for many decades. We have two important tasks to solve. One of these is sustainability, which can be ensured through technological development, through linking knowledge and the economy and through fine-tuning the transformation of subsystems. The other task is managing the labour shortage. This is a highly complex problem, because we will only be able to catch up with the West if we increase wages and at the same time improve the quality and productivity of the labour force. And this brings us back to the importance of training…

What key skills and qualities does a mid-sized business need to grow into a large company?

Openness, the ability to tolerate risk, the ability to innovate, a well-identified market, exports, the right employees and of course capital. But each of these would be worth a separate article on its own.

What geographic directions can you see in the exports of Hungarian companies?

86 percent of our exports are to the European Union; while this makes us vulnerable, it also has far more advantages than disadvantages. In this direction, our export structure is pretty well-established now. As early as 2002, MKIK’s foreign trade strategy included the reconquering of old export markets. We fully agree with this objective, and we support it, but we also see the pitfalls. We can wax nostalgic about the glorious past, but the majority of traditional Hungarian industrial goods are no longer competitive. But then there are so many new ones! Medicine, the health industry, water technology, environmental protection, processed foodstuffs, information technology – and let us not forget about services, either. Fortunately, the list could go on and on.