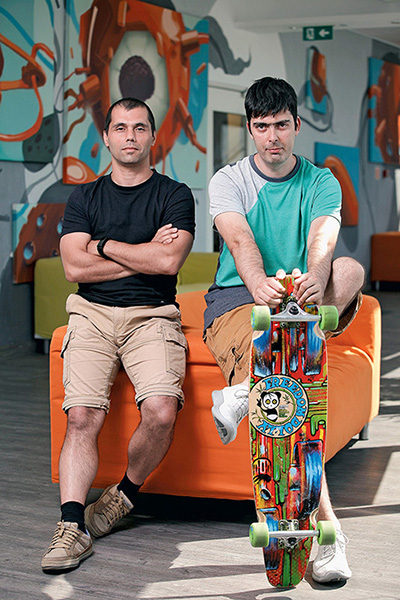 Today, clients such as Apple, Facebook, Walt Disney and Netflix, as well as several major banks all vie for the services of Starschema, a company founded in 2006.

Since its establishment just over ten years ago, Starschema has become one of Hungary’s largest business intelligence (BI) companies. It was able to react in a timely and effective manner to the rapid development and application of technology using and processing big data. With its innovative solutions and open business philosophy, it has managed to put together a globally unique portfolio. The two founders/owners, Tamás Földi and Péter Csillag, now employ 150 IT experts and programmers at their main headquarters in Budapest, and soon in Silicon Valley as well, as it is almost impossible to exist in this sector without maintaining an IT presence there.

Both of them describe – with a hint of irony – their main activity as consisting of business reconnaissance, meaning that they prepare solutions and applications for their clients, which include Apple, Facebook, Walt Disney and Netflix, as well as some of the biggest banks and multinational corporations, to analyse compilations of various business data, such as data regarding production, sales and clientele. With these solutions, companies can considerably simplify their work processes, reduce costs and increase revenues.

What makes the company especially stand out among its competitors is that its strong staff of experts is continuously investing in seeking out and developing new, effective big data and BI technologies and solutions. Starschema is thus able to deliver high-quality services to its clients and preserve its globally unparalleled price/quality ratio.

Tamás Földi says that one of their main areas is data visualisation. He believes that it represents a great value to company heads and decision-makers if they can just look at a laptop screen or a mobile app and see at a glance which area – based on the visual analysis of data – requires intervention. This saves them time and money by not requiring the interpretation of lengthy letters and reports. With regards to the company’s success, its revenues amounted to HUF 619 million in 2014, HUF 1,227 million in 2015 and HUF 1,890 million last year. Interestingly, only about 20% of this comes from the domestic market.

“In order to further increase our profits and speed up our expansion, we are considering using venture capital as well, whilst keeping an eye open for funding opportunities, although we are managing fine without them. We have taken a loan, and we make use of financial opportunities, as we generate an annual profit of about 10-15%, while the company’s growth rate was 80-100% over the past few years. However, it is difficult to grow both organically and quickly just from this”, says Péter Csillag, who is also – rightly – proud that Starschema has been the recipient of several distinctions. One of the most prominent of these is that the company has now appeared for the second time on the US-based Inc. magazine’s list of the fastest-growing European enterprises. The compilers of the ranking list take into account the company’s economic performance over the last three years.

The majority of Starschema’s contracts are naturally concluded under strict non-disclosure agreements, thus a significant part of the references in its portfolio cannot be made public.

With regards to its HR strategy, the company pays its IT experts with extensive experience well, and hires people who are able to autonomously manage entire projects. Of course such people are hard to find everywhere in the world, let alone Hungary. For this reason, besides providing competitive benefits, the company also strives to create a pleasant and flexible working environment to ensure employees feel at home. Thus they can play ping-pong or hit a punching bag at any time in the multi-storey, Google-inspired offices with panoramic views, for IT work does not provide a continuous “adrenaline rush” – not even when its result is exceptional at the global level as well.