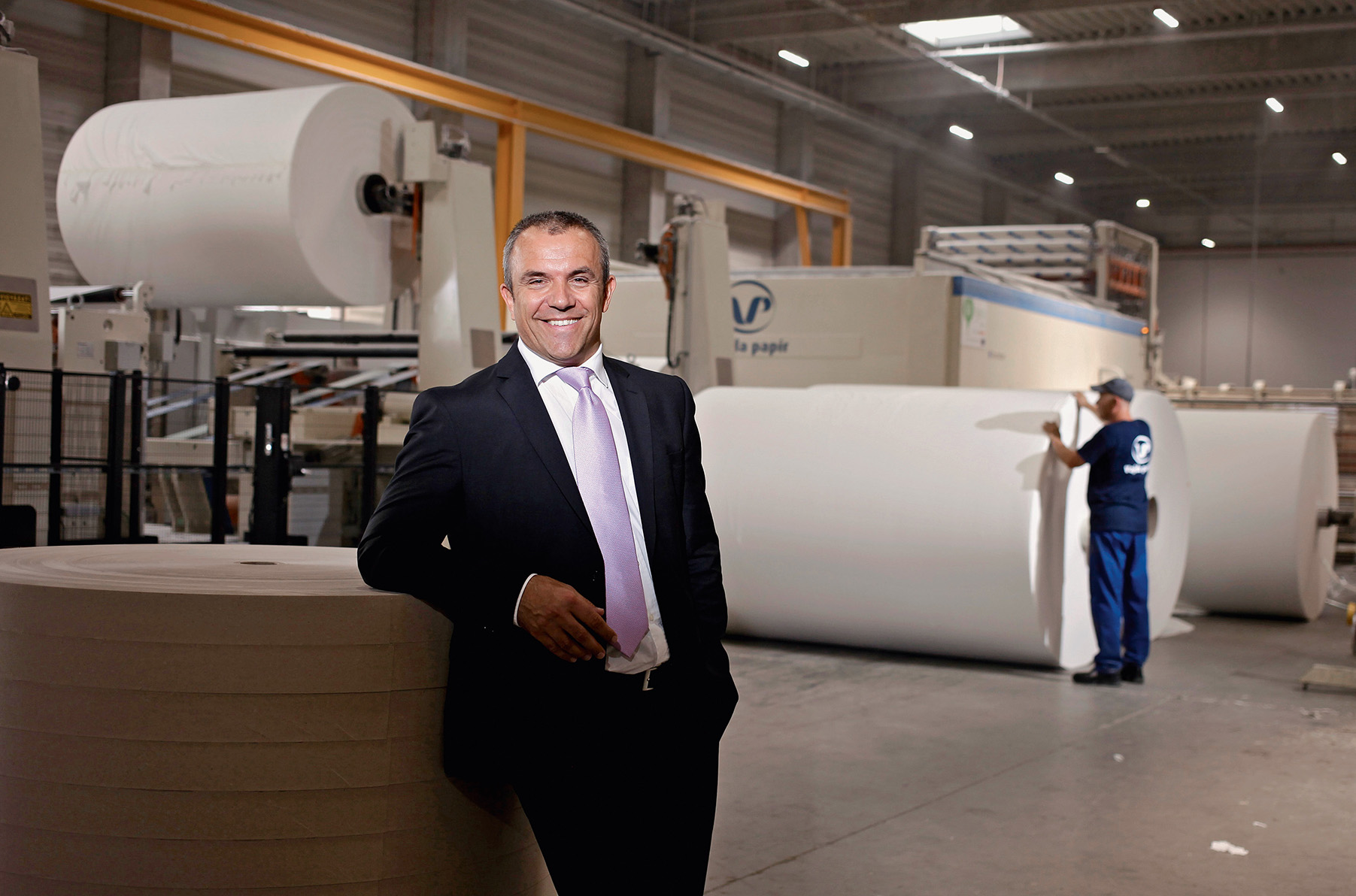 Thanks to its latest investments, Vajda Papír, which started out as a garage business and today generates HUF 26 billion in revenues, will be producing half of the raw materials required for its production in Dunaföldvár as of next year.

The owners of Vajda Papír have travelled a long and winding road. For years, they sold slippers bought in Szabadka and leather jackets imported from Turkey on the market in Dunaharaszti to finance their future business. When managing director Attila Vajda was still in high school, he earned pocket money by selling leftover products from home. He would always set challenges for himself – for example, he tells how he would count how much time it took him to get to the shop as he always tried to beat his record. He has always wanted to improve his performance. This spirit of competition still drives him today, and he believes that this is the key to his company’s success. One of his criteria in selecting new hires is also eyes bright with enthusiasm and a can-do attitude. But to go back to their beginnings: Vajda had planned to be a TV and radio technician, but thanks to a trip to Germany, he ended up getting a job at Masped after graduating from a college of foreign trade. He continued to sell at markets – now working together with his wife – for a while, and this was how they met with the manufacturer of their first equipment in Turkey. The idea was to sell the produced toilet paper on the market. Their revenues, amounting to a few million forints in the initial phase, began to grow over a few years, and the turnover of Lilla toilet paper, once the brand found its way into the shops of the “Everything for HUF 100” (“Minden 100”) chain, increased sharply. Later, this channel became the driver of their expansion after they introduced their own brand products. By 2001, their revenues had grown to around HUF 10 million. By this time, they stopped selling in markets, purchased new machinery, and started building contacts with commercial chains present in Hungary.

After their children were born, his wife temporarily took time away from active work, and now is in charge of the companies finances and the administration of approvals. The boys are now aged 16 and 18 and spend their holidays at the company. Attila Vajda’s dream is to some day manage the company with his sons. Of the nearly 600 people working at the company, there are 400 at Budapest, 130 in Norway, while the raw material paper producing and capacity expanding plant to be launched in Dunaföldvár will have a team of 105 as of February of next year. Starting in the 2018-19 academic year, Vajda Papír will also function as a education site as part of the dual training programme, which will also help the company counter the labour shortage.

They built their current 35,000 square meter plant in 2008 in Soroksár, as part of a 7.5 hectare HUF 2 billion greenfield investment, funded in a small part from their own contributions and from a loan extended by MKB Bank. Although the company’s development was uninterrupted, with a steady and even growth in revenues, the year 2011 represented a special milestone. This was when they went from a family business to a big company by creating the upper and middle management levels. Vajda’s daily routine changed: he is now in charge of developments, strategy, and major projects. They invest 2% of their revenues into innovation – as well as marketing. One of their latest innovations is resealable packs of 100 paper tissues.

The company leads the entire hygienic papers market, but is considered a newcomer in terms of brand products. However, primarily due to its consciously promoted Ooops! brand, which is six years old this year, it is at a secure second place within this segment. Essentially since the very beginning, they have been making the entire range of hygienic papers including toilet paper, paper tissues, paper napkins, and paper towels. Today, the 70,000 tons of hygienic paper produced on 22 production lines is made up of over 600 items, all of which can now be purchased in every retail chain. “Our products represent great value for money. Our advantages: striving towards perfection, flexibility, ability to adapt, agility, and being a family business.” The managing director believes it is important to keep their operations completely legitimate - last year for example, the company paid over HUF 5 billion in taxes.

Exports account for half of the entire volume produced in Hungary, while only 20% of that of their Norwegian plant. The long-cherished plan of producing base paper was an important reason for their Northern acquisition in 2013. In fact, the know-how of the entire integration was obtained through the purchase of the old Norwegian factory, where this had already worked. In the end, the plant in Dunaföldvár will be built this year as a greenfield investment of HUF 12 billion, for which they will be receiving a “large investment grant” (NBT) from the Ministry of the National Economy.

Their plans for the next 2-5 years, to be adjusted to market trends, have been completed, and are to be implemented in a transparent manner through their corporate governance system. This year, they expect market expansion and single-digit growth. Among Vajda Papír’s five-year plans is to start producing paper in another country as well.

“Our market is characterised by big volumes, big turnover, low profitability and the need for big investments with relatively expensive technology”, says Vajda. The managing director admits that they may seek external funding. At any rate, the new plant will provide half of the company’s required raw materials in the future, which will have a positive impact on its profitability.