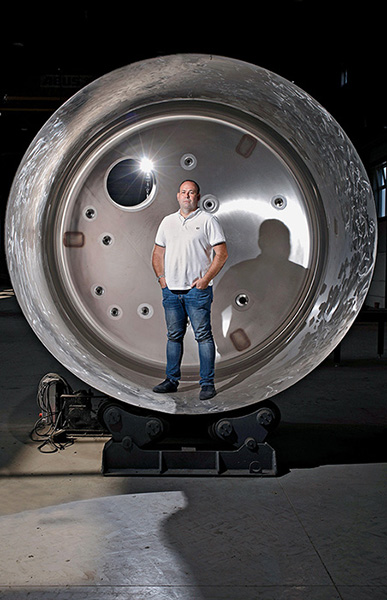 With a role in the technical development of most pharmaceutical manufacturers and soft drink and mineral water plants working in Hungary, Cooptech Llc. is a company whose partners include virtually all the pharmaceutical companies operating in the country.

After its founding in 1992, Cooptech was awarded significant projects in the construction and transformation of soft drink and mineral water plants in Hungary. These projects formed the company’s backbone in its early years.

After the 1990s, the company worked primarily for businesses in the food industry. A greenfield pharmaceutical project provided momentum for growth and demanded that the company meet far higher criteria than in earlier projects. These included sterility requirements in line with strict international expectations and standards, and the maintenance of pharmacopoeia and documentation in line with advanced quality requirements. The company currently plans, manufactures, installs and repairs systems made of hygienic stainless steel, and maintains the appropriate documentation in line with quality assurance regulations. 30% of its clients are food industry companies, and the remaining 70% come from the pharmaceuticals industry. As a result, the company has to meet high standards as far as the sterility of its systems is concerned. Since May 2003 the company has had to acquire EU-standard certifications, and as a result has had to transform its quality assurance systems in line with PED standards. The certifications of the company’s welders and their technological protocol examinations also meet these standards. When Hungary joined the EU, the company already had the necessary PED-compliant certifications.

These certifications changed the organisational structure and the goals of the company considerably. Quality, and a professional approach to both planning and execution, became increasingly important. It became crucial to use the most advanced planning systems and the company also upgraded its validation and documentation systems in order to meet the requirements. Of course, the company also upgraded its assembly and manufacturing machines and equipment; today, they are able to test some of their equipment in their own manufacturing workshop prior to delivery.

As a result, over the last ten years, Cooptech has become one of the most important planning and implementation companies in Hungary in the field of biotechnology and pharmaceutical applications. Today it is able to design almost all projects themselves, which shows that they represent world-class standards in the sterile pharmaceutical industry. The management of the company tries its best to prepare for economically more trying times, and as such Cooptech was able to weather the crisis of 2008-2009 relatively unscathed.

As with so many companies founded at the time of the change in regime, Cooptech has also had to deal with the problem of intergenerational succession. At the same time, the Dunaharaszti-based company has taken an exemplary approach to its change in management. The founder, György Várnai, gradually took a more backseat role, and handed over leadership to Balázs Vigh, who has been with the company for twenty years.

Cooptech has developed continuously since it was founded, and there are two reasons for the company’s success. One is the practical expertise and experience acquired through quality production and projects – something which cannot be acquired in Hungary’s education system today. The other is effective management. For many years, the company’s returning clients have included Teva, GSK, Chinoin, Egis, Ceva and Gedeon Richter. This illustrates the extent to which the company is recognised on the market.  In addition to some 150-200 smaller projects, they are able to complete 2-3 complex general planning and implementation projects each year.

Although Cooptech does not have any foreign subsidiaries, it does strive to have a presence in foreign markets. According to managing director Balázs Vigh, there is currently a clear demand for pharmaceutical systems, equipment and engineering solutions in Western Europe; for this reason, in the long term they plan to open an office abroad. The construction of the company’s new manufacturing hall is currently underway, at a cost of hundreds of millions of forints.