Not only focusing on fixtures and accessories - Szatmári Llc. - Bet site 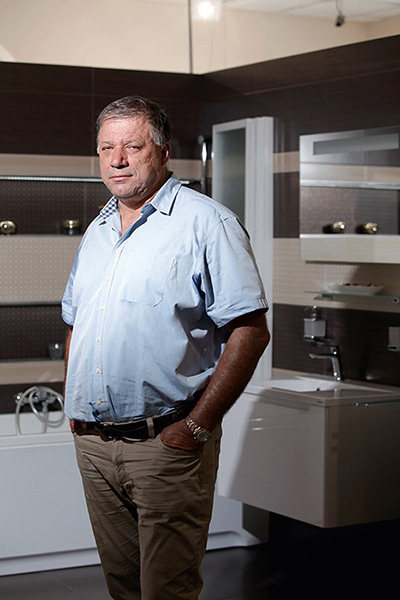 Although most people know the name Szatmári from their network of stores specialised in building engineering, they also happen to be Hungary’s second biggest player in the milling industry. They also have agricultural and real estate holdings. The business, which originally started out as a small gmk, is growing at a spectacular rate.

Here is another family business that was founded as an “economic work community” (gmk) before the regime change in Hungary, though it has a different history than most small- and medium-sized enterprises. It is a company group that is on a par with the biggest in the world, with over 1,200 employees throughout Hungary, and, according to preliminary figures for 2017, total revenues close to HUF 70 billion.

In the beginning, the owner of Szatmári Llc., Zoltán Szatmári, couldn’t even dream of success at this level. As a modest, hard-working person, he worked in installing and repairing gas pipes before 1989, as the leader of a team (more precisely, a gmk) of five to ten workers. In 1990, he and his wife started selling MEP items in one small shop in the town of Jászberény. A good two years later they moved into wholesale as well, purchasing a 2,000 square meter warehouse in the town. This site also had an operating mill, so – in the name of diversification – they also got involved in milling grains. As Zoltán Szatmári says, after two years, they still couldn’t say whether distributing MEP items would be a sufficiently stable business. By now, however, both businesses have more than lived up to the expectations.

Over the last quarter of a century, the number of specialised MEP shops has grown to 36, and last year, the revenues of this sector exceeded HUF 30 billion. Since then, the company group has carved out a market share of nearly 20% in the Hungarian milling industry for itself, achieving a turnover of HUF 15 billion in 2016. Admittedly though, the fact that the family owned three mills already by the mid-1990s contributed a lot to this. Currently, the group has mills not only in Jászberény, but also in Veszprém, Kiskunhalas, Törökszentmiklós and Szeged, supported by a commercial centre in Karcag. The capacity totals 340,000 tons of grain per year.

They also have an agricultural business, launched eight years ago with Jász-Föld Zrt., and later added dairy companies Naszálytej and Jásztej to it. Besides 1,000 dairy cows and their calves, their livestock also includes 800 sows. They also cultivate many plant varieties. This business optimally supports their milling operation.

Diversification is crucial for the family and provides the right background for continuous improvements. For example, as part of their property investment activities, they built the Szatmári housing complex in Jászberény, which is made up of 400 free-standing and row houses, but could fit twice this much. And in the centre of the town, they will complete the construction of a five-storey, twenty-room modern hotel, housing several shops, by the end of next year.

To return to their original line of business – MEP – the company actively practices its motto “continuous development” by leveraging regional business opportunities. Before the turn of the millennium, they opened shops mostly in the larger border towns in the eastern part of Hungary, because at that time, many contractors and private individuals would cross over from Ukraine and Romania to buy modern MEP products. In fact, later they began working as a wholesale hub, shipping truckloads of goods to these countries, and later to Slovakia as well. The group today also includes a shipping unit made up of 50 freight lorries.

Hungary’s accession to the EU had a negative impact on their business, and the crisis has also significantly affected their turnover to the point where even one of their major customers, who had been considering purchasing the entire network of shops, disappeared. The Szatmári stores do not follow the franchise model. Instead, the company owns all of them, and also the properties on which they are located through a property management business.

Being the market leader, they are confident and strive to make informed decisions aiming to upgrade and modernise their existing network and to better meet the needs of their customers. Over the next year or two, they plan to cover the two or three major towns and regions which are still missing from the huge map of Hungary hanging on their office wall.

Continuous development means more than just expansion: the company is aware of the needs of its customers and is flexible in adjusting its commercial practices accordingly. For a shop that sells MEP products as well as sanitary fixtures, flooring and tiles, customers buying individual units one at a time and buyers for large construction projects ordering several hundred radiators, dozens of sanitary fixtures, and several thousands of square meters of floor tiles at once are equally important. This is why their shops have separate counters for both. They also plan to have a dedicated counter for repairmen and smaller contractors in most of their shops.

This is also required because as a result of the current building boom, the turnover in Szatmári MEP stores has been growing nicely, and in view of the type and timing of the projects, exploiting the general growth of the market still lies ahead.

The greatest challenge for them is finding and retaining good workforce. “Our area, the Jászság, is at least as important and strong a region for Hungary as for example the Győr or Székesfehérvár areas. There are many large corporations here, and it is just as hard to find workforce here as in the western parts of the country. Newspapers are full of job ads, while wages are at most 10 or 20% lower than in West Hungary”, says Szatmári. They have over 500 people from the area alone working for them in the group, and there are continuous wage increases to help recruit new workers.

Every member of the family works for the business. Since various responsibilities are divided in a well-organised and competent way, the system works extremely well.