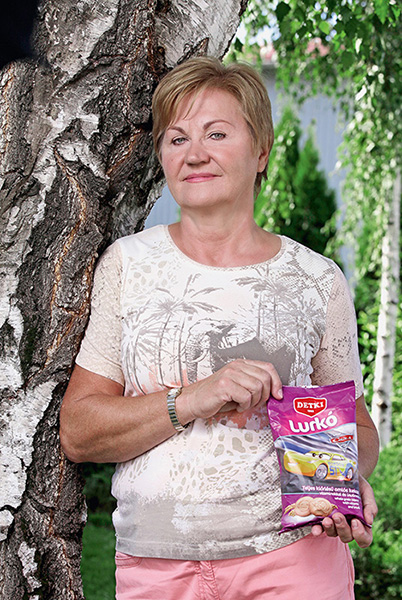 Detki biscuits have been produced in Halmajugra for thirty years. The revenues generated and their volume have been increasing continuously.

All of the owners contributed some “ingredients” to help launch Detki Keksz in 1983: the Sweets Industry Company donated an old machine, the Detki agricultural cooperative gave them the lot, while the Heves County Baking Industry Company provided them with money and staff. The first manager of the original factory, which produced 3000 tons of biscuits a year, was Kálmán Koósa, who as a jack-of-all-trades, lead the company for nine years. When the economic association was turned into a limited liability company in 1992, he passed the torch to his wife, Olga Pavlova. They met in Moscow, where both were studying food industry mechanical engineering. Pavlova maintains that all she has is the degree, as over the years, she mostly focused on management and commercial aspects. Detki Keksz is now owned in equal shares by three families, who meet once a month. Currently, 95% of the 10,000 tons of biscuits produced annually on average are sold on the Hungarian market. With this, the company produces a great part of the national amount of approximately 24,000 tons.

The company’s first major equipment purchase was in 1999. In 2007, they won a grant to set up their company governance system, which is when Péter Koósa, son of the Russian CEO, joined the company as a project manager. “Since then, he has learned about all aspects of the company and has introduced many innovations”, explains Olga Pavlova. Today, the company is managed by mother and son together. “What moves the company forward is know-how, dynamism and dedication, as well as achievements. It is great to see my son proving himself in more and more ways and always setting new goals.” Péter Koósa says that he wraps up each day with reviewing the positives, the negatives and potential improvements.

Although they launched into intensive brand building last year, they are defending themselves against cheap foreign products flooding the market by introducing “B” brands and broadening their product range. In addition to products aimed at children, they are also developing sugar-free and gluten-fee products as well as high added-value products. A plain biscuit is an-all time favourite in Hungary, accounting for 65% of total production, with 30% sold in a ground-up form. This was the first product of Detki Keksz which was copied by its largest rival, a multinational company. “Now I regret not having registered it back then”, notes the company owner. In all their simplicity, plain biscuits are a Hungarian specialty and are ideal for young children or for digestive problems. The company first produced house-brand household biscuits for the Profi food store chain, which has since gone out of business.

They were hesitant about entering this market, but they did not want to lose the potential turnover from this segment. Looking back, they made the right decision: today house brands make up 38% of the total sweet biscuit production, produced in a large part by Detki. As part of their brand building efforts, they switched to lilac as a colour for the packaging of their branded products, because it was a colour none of their competitors were using. They tripled their marketing expenditures and added a marketing specialist to their team. Meanwhile, the size of their plant was expanded by 3400 square metres in 2012. Though it also meant a significant increase in their warehousing capacities, this has since proven to be insufficient, and thus they have been forced to rent a warehouse again since 2013. In the same year, they bought a 1.3 million EUR oven, three packaging machines and one dipping machine. Over the last seven years, they have made HUF 3.2 billion of investments, of which 680 million was obtained through EU funding. “It was in the year 2012 that we decided that the company had enough capital to launch a series of investments. Our aim is to invest all of our profit”, stated Péter Koósa. More developments followed in the plant equipped with new machinery (they only have one old oven that still needs to be replaced):

In 2014, they launched an innovative product, cracker chips, which uses a new technology – surface flavouring – to give them a pleasant taste despite a low salt content. Last year, processes were further mechanised to the point where even boxing is partly automatized. A related innovation of theirs, which can be used to reduce the fluctuations in volume of the finished product, was funded from own capital and credit. The HUF 500-600 million developments planned over the next year and a half are designed to increase efficiency and automatization. Because of their strong financial position, they will rely mostly on grants and only to a small degree on credit.

Detki Keksz also aims to strengthen their employer brand. As Péter Koósa puts it, “In addition to a competitive salary, we also have an incentive system based on quality and performance, as well as a good benefits and bonus package – even so, it is hard to find good staff, people who are willing to give their best, like in the old days”. Currently, they have a staff of around 150, and most of them are shuttled by a company bus over a distance of up to 60 or 70 kilometres.

Despite the 3% growth of the entire biscuit market last year, the company’s good revenues were offset by an increase in wages, the prices of ingredients and packaging materials, as wells as a drop in consumer prices, as reflected by their 2016 figures. However, solid growth is anticipated this year in both volume and revenues.