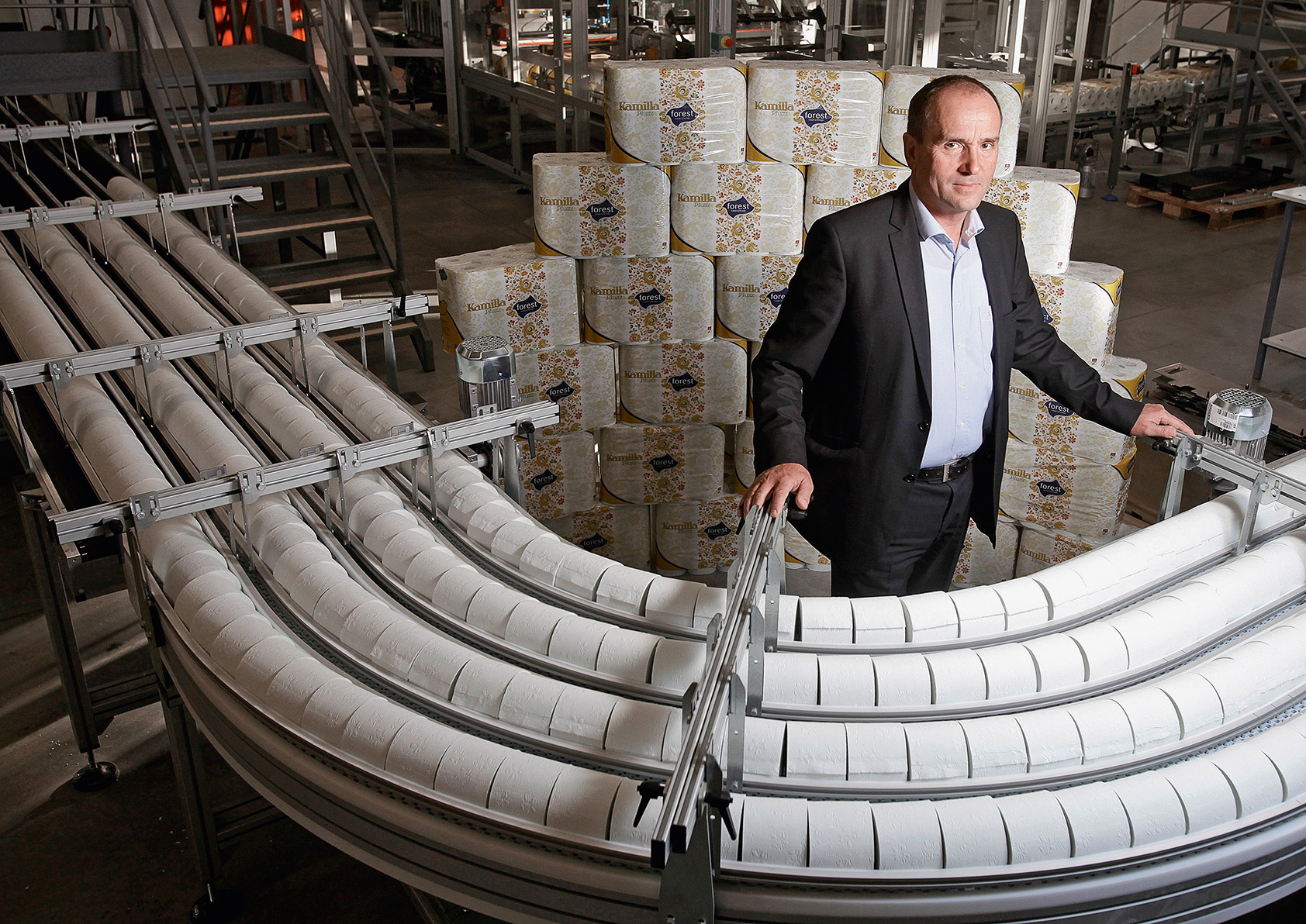 Ferenc Bodrogai, one of the genuine daredevils of the paper industry, has recently sold the brand name Forest-Papír and the consumer segment of his company to an Italian multinational company, only to plunge into two partially new areas with his customary vigour: hygienic services and the Hungarian food industry.

How do we separate the relevant from the irrelevant and strip away the appearance from reality? These were just some of the philosophical questions that occupied Bodrogai, founder of the prestigious Forest-Papír, as a child.

In the end, he chose a highly practical profession over liberal arts. Although the charismatic young man, with clear and strong views of the world, had originally planned to attend a high school specialised in fishing and hunting, he changed his mind when two gentlemen came to his school career guidance class and told them about paper production being launched as part of a Finnish-Hungarian joint venture in several places throughout the country, including Lábatlan, close to his hometown. He then decided to train as a skilled paper worker instead. However, since the training took place in Dunaújváros, the first time he set foot in the plant in Lábatlan was in 1970, after graduation.

Thanks to his assertiveness and attention to detail, he won one ‘outstanding student’ competition after the other. He was barely 19 when he was asked to operate a paper machine weighing several hundred tonnes, even though this is usually a responsibility only given to seasoned professionals well past 40. He loved his job and knew all the ins and outs of it.

He played an active part in Hungarian paper production and was considered one of the best workers in the industry. His excellence and agility won him a scholarship to the paper industrial engineering faculty of the Light Industry Technical College, where he graduated in 1980.

He was put in charge of paper napkin production at the Lábatlan plant around this time. However, as he is the type of person who thinks good can always be better, he fundamentally restructured manufacturing processes, and introduced an incentive system that also applied to maintenance personnel. Partly as a result of this, the output of the plant grew from 220 to 420 tonnes per month. The almost doubled output soon led to stock management issues.

According to Bodrogai’s philosophy, “You need order in your mind and around you, otherwise things start to go downhill”. Right before the change of regime, he was put in charge of the commercial department, where he established a very successful team of 36. The Greek owner who purchased the Lábatlan plant in the great wave of privatisation in the 90s did not see eye to eye with Bodrogai, so he tendered his resignation after 2 decades of dedicated work.

Although for a couple of months he nurtured plans to open a family fishing business, and even came up with a few peculiar innovations that gained widespread recognition in the Hungarian fishing community, he eventually decided to open a new paper business - Forest-Papír - with three colleagues. “In the first 6-8 years, we lived from one day to the next. In the beginning, we could hardly scrape together starting capital of 1 million forints each and had many bumps along the way”, he recalls. Though the 90s saw the rise of many new companies, their small business was dogged by bad luck. For example, the head of the paper plant in Fűzfő passed away just five days after signing a contract with Bodrogai for the reorganisation of the plant’s commercial department, while the agreement with the paper plant in Hermánd came to nothing when the plant burnt down. Next, they made a deal with the match factory in Eszek, and ordered the packaging from the paper plant in Budaörs. The first matches had barely come out when the Budaörs plant also burnt down. “Even though that wasn’t where we kept the matches”, Bodrogi notes with a trace of irony in his voice.

Business took off when they had made enough profit to buy a machine of their own. They got their first Italian napkin machine for a pittance, and characteristically enough, Bodrogai made some improvements to it to make it more profitable.

Around the turn of the millennium, they bought their first (run-down) plant in Lábatlan. Thanks to their excellent reputation in the paper business and the hard work they put in, they reached a turnover of 8 billion forints by the start of the crisis.

Luckily, they had launched their new plant with an investment of 1 billion forints at this time. This unusual move paid off: back then, major producers in Western Europe were still struggling, resulting in revenues of 11 billion and a profit of 1.3 billion forints for Forest by 2009–10. They received many offers to buy their highly successful consumer segment, including several ones from the world’s sixth and Europe’s second largest paper producer, the Italian Soﬁ del. In 2015, Bodrogai finally decided to sell.

So why did he decide to sell his company’s brand name and entire consumer segment? He explains that in the retail business, which is dominated by multinational companies, and in particular, the FMCG segment only globally strong major producers have the necessary leverage to maintain profitability in the long term.

That’s why Bodrogai now focuses on two new areas. Assist-Trend Ltd. offers comprehensive hygiene solutions ranging from chemical products through hygiene paper products and remote laundry monitoring services to hotels, restaurants and institutions. The other avenue is food: in addition to the Áldomás program conceived by Bodrogai, Omega Bázis Ltd. is gaining momentum, selling seeds germinated with special technologies and plant oils with health benefits. Bodrogai, who continues to play sports to this day and could easily pass for 10 years younger than his age, is the ideal poster boy for this line of business.