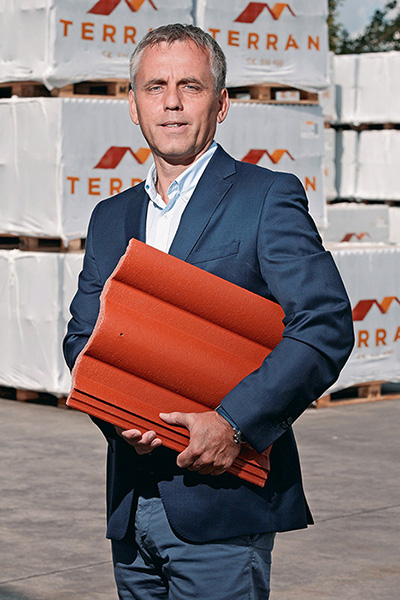 Thanks to its cautious and prudent development policy, Terrán Tetőcserép Gyártó Llc. has grown into an international company with one of the most advanced manufacturing processes in Central Europe.

Over the nearly 30 years since its foundation, the company formerly known as Mediterrán Llc. has become a leader in the region. In addition to plants in Bóly and Kunszentmiklós, they have one in Slovakia and will soon have another in Transylvania. They have subsidiaries in the Czech Republic, Slovakia, Croatia, Serbia and Romania and also sell a large number of roofing products in Bosnia and Slovenia.

The foundations of Tetőcserép Llc. were laid by the grandfather of the managing director’s wife in 1920, when he started making concrete-based roof tiles. They continued to make tiles by hand up until the early 1990s. The legal predecessor of the current company was founded as an economic work community in 1984. Back then, a craftsman working hard could produce no more than 400 roof tiles a day. Today, each plant turns out over 1,000 items a day in a fully automated process.

Since its establishment, balance has been their first priority both when making investments producing continuous growth and in their daily business. They believe that a reasonable balance between market conditions and the opportunities they have could be the key to success.

“Our operations have been characterised by cautious, prudent but decisive steps, guided by one important principle: to be in balance with our opportunities”, explains company director Attila Gódi.

After the change of regime, there was a shortage of building materials, which was seen by the family as another growth opportunity, even though they lacked the necessary technological background. “My wife’s father Dr. Vilmos Mészáros began some major transformations in 1993: he bought a semi-automated production line which, though operated manually, enabled the production of one million high-quality concrete roof tiles a year”, says Gódi. They also relied on external funding from bank loans in addition to reinvesting their profit. This was a tougher period given the challenge posed by multinational competition, not to mention the lack of proper production capacity, especially considering that up until 1998 they were barely able to keep up with the tremendous demand. As a result, they started expanding in order to leverage opportunities. They completed construction of their Slovakian plant in 2004, founded a Transylvanian subsidiary in 2005, and maintained a presence in several former Yugoslav countries. The family takes pride in having survived the increasing competition in the sector and several acquisition attempts. Even though they have become a target for acquisition, they have managed to keep the business under family control.

2006 marked the next milestone in the company’s growth, when it formulated its development plan for the next ten years, involving the construction of a new plant in Kunszentmiklós. The factory, completed in 2008, boasted some of the most advanced equipment in the region. However, barely one month after it was completed, the financial crisis hit and caught the company unaware. “The disruption of the Hungarian market is illustrated by the fact that the number of new builds dropped from 44 thousand to 6-7 thousand, which means the sector shrank to less than 20% of its original size, landing us in a pretty tough situation”, recalls Gódi.

The key to surviving the crisis lay in expanding their export operations. Since Romania, Slovakia and the Czech Republic were less affected by foreign currency lending and hit less hard by the crisis, Terrán Tetőcserép Llc. was still able to maintain a presence in the region even in the most challenging times.

Their strategy worked, illustrated by the fact that no redundancies were necessary. In fact, they made a bold move in 2010 when they could already see that the crisis was going to last longer and make a more profound impact than they had originally thought. Instead of just trying to survive the crisis, they used whatever funds were available to them to build another plant to replace the Bóly factory, where production costs had become too high. The plant, completed in 2012 and the result of a nearly 2 billion forint investment was the largest and most modern concrete roof tile factory in Central Europe with a production hall of 3,500 square meters.

They went from a traditional business with one plant, producing one product to a leading roof tile producer in the region. Using their cutting-edge production systems they move 0.25 billion tons of raw materials a year to produce 50 million tiles of nearly 100 varieties. The next step is to become a medium-sized company by European standards, which they hope to achieve by further expansion of their export markets. Gódi has high hopes for their soon-to-be completed Transylvanian plant, which will add the Transylvanian market to the existing ones of Budapest, Zagreb and Belgrade.

Expansion in Western Europe would be another breakthrough opportunity for the company.

Currently, finding and retaining sufficiently trained staff is the biggest difficulty for the company, while building a regional organisational structure and work culture poses the greatest challenge to development. The managing director takes pride in the fact that the staff in charge of the various functions have been with the company for 15 to 18 years. At the same time, the development of the organisation means that new positions need to be created.