From a small garage to a global clientele - Julius-Globe Ltd. - Bet site 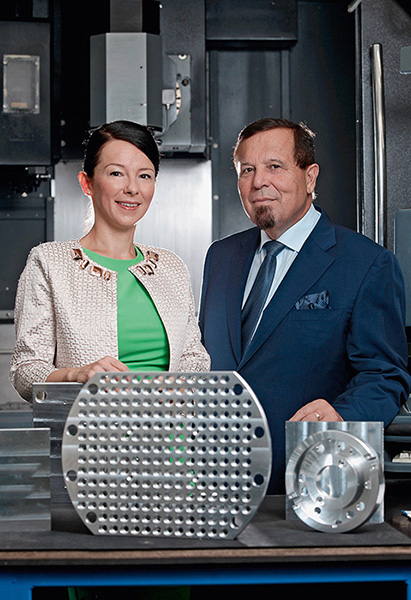 From a small garage to a global clientele Julius-Globe Llc. owes its success to reliability, flexibility, and continuous improvements. With their state-of-the-art manufacturing technology, highly qualified and loyal workforce, they have high customer satisfaction rates, especially on the international market.

One of the first products of Julius-Globe, launched in 1998, was a so-called logical globe made of metal. As quality manager and owner Erika Rácz explained, this dynamically expanding, Hungarian-owned company currently mostly focuses on precision lathe-turned parts and devices, 60% of which are destined for export. However, they do also have a significant share of the Hungarian market.

In their 2800 square meter plant facility equipped with state-of-the-art machinery and located near Győr at Győrújbarát, the various phases of the company’s evolution are clearly visible. Not long ago, they found themselves in the spotlight when winning the European Business Excellence Award. They only entered the contest to see how they measured up on the international scene, and further increase their visibility.

Here, several generations work side by side in a convivial atmosphere. Youthful enthusiasm is supported by the professional experience and know-how of the senior colleagues. To keep up with the fast pace of technological advance, the team is continuously updating its professional skills.

The company, operating with 41 employees, offers not only relatively high average wages but also various benefits such as home loans.

They have extensive experience in the CNC machining of high precision parts for the health, technical, automotive, packaging and high-tech industries, as well as in designing and manufacturing devices and complex production lines for suppliers to the automotive industry.

Their first major partner was Philips. At that time, they had a plant in Győr with about 250 employees working in three shifts, just to supply the Dutch company, where they assembled and reworked electronic and mechanical parts. The company’s exposure to Philips was enormous: in 2004, the Dutch company accounted for over 90% of their entire revenues. This was how they learned the importance of flexibility, which manager and owner Gyula Rácz still sees as one of their main competitive advantages. They often had to go into the plant at night or on weekends to troubleshoot customer production line shutdowns, he recalls of their early days. Their innovative troubleshooting succeeded many times in relaunching the Philips production lines. Besides flexibility, expertise also proved to be crucial to their success. Gyula Rácz is convinced that without the five years he spent in a toolmaking vocational programme, neither the plant nor the company ever would have existed. He later took degrees in mechanical engineering and economics, the latter also coming in handy for his various banking transactions.

After Philips’s exit in 2004, they began to gradually “distance” themselves from the Dutch company and in 2010, they shut down the unit that had been producing for it. Later, the contracts that they received from Robert Bosch, Siemens, Audi, and other large multinationals helped to replace this market share. Since 2013, Julius-Globe’s revenues, EBITDA, and human resources costs have been growing steadily each year. In addition to many other factors, this was achieved through technological improvements, diversification, and supplying to various sectors. “The market is constantly changing, you can never just sit back and relax”, notes Gyula Rácz.

As a matter of fact, our conversation is taking place in a separate office, and there is only one wall separating us from the small, garage-sized space from where the whole company started nearly twenty years ago. Besides their modern CNC grinders and CNC lathes, they also own nine CNC machining centres, and have plans to buy their sixth five-axis CNC machine. “This is one of the sectors where you can never stop improving”, says Erika Rácz. “Every year, new higher-precision, technically more complex and automatized equipment shows up on the market, which means our clients also require higher-precision parts from us, which can only be produced using state-of-the-art cutting machines that ensure greater precision.”

They purchased their first two simultaneous five-axis machines right before the 2008 crisis hit. With the sharp drop in the number of orders, the staff was left with plenty of time to learn how to do machining with these equipment, which were considered a novelty at the time.

According to the head of the company, they were able to recover quickly from the crisis because they responded rapidly and – though this was not a conscious decision at the time – diversified their operations, supplying several different industries at once. Another important factor was the absence of any current asset loans, as current assets had always been purchased using their own funds. For them, it was an advantage that the crisis only hit the energy sector a year and a half later: in 2009, they secured a major order from their biggest partner, Siemens. Thus the lesson they learned from the recession was that in times of crisis, development is essential. It is a great advantage for a company to be able to finance its current assets from its own funds, and the broader its client portfolio is, the more secure its future will be.

For years, they have also been performing experimental R&D for Hungarian and international partner companies. They have also been closely following the developments of the Industry 4.0 processes, which are integrated into the equipment and devices they design, manufacture, and install, such as e.g. laser and optical sensor networks, camera systems, as well as automatized repair systems to help their clients improve their manufacturing processes and increase their production capacities.

For the owners, technical training continues to be an important part of the company’s operations. Over the last 11 years, nearly 200 apprentices have completed their internships at the company. They participate in various career orientation programmes in order to help as many students as possible to learn about the sector, and to attract students with technical interests and skills to the metallurgy industry. In their everyday operations, they know the value of skilled specialists. At the same time, they trust that professions requiring knowledge of the metallurgical and machine industry fields will gain in popularity among young people.