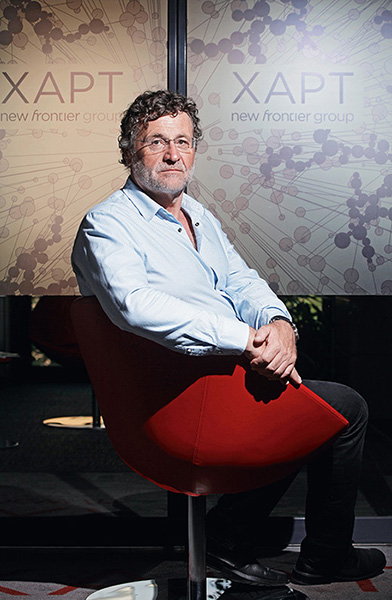 After founding the company, Zoltán Schvarcz, who had significant experience in corporate management and client care, and had worked for various global companies, reviewed around 70 types of specialised software.

Zoltán Schvarcz had always worked with ERP and CRM software all his life, struggling against the old, inflexible and outdated software preferred by the biggest companies. “I remember in the beginning, we had Japanese clients who made tiny car parts, and needed a system to coordinate accounting and other processes. The problem was that the big companies couldn’t offer a software that could handle the prices of the tiny pieces and write dollar amounts all the way down to seven decimal places. Most of the systems available counted to 2 or 4 decimal places, and there was maybe one that could go down to 5. Meanwhile, it took our programmers 15 minutes to write the code that the client needed”, recalls the CEO of XAPT Llc.

Zoltán Schvarcz, who had gained lots of experience in this area while working for global companies, reviewed nearly 70 ERP softwares after founding the company. Together with his staff, they found ten that were good, but only three made it to the shortlist: Navision, Great Plains and Axapta. The latter ended up being the winner, and became the company’s namesake as well. What made Axapta so special is that, while in a robust system, the issue of the seven decimal places could typically only be solved by dozens of Asian programmers over a period of 3 to 4 months, the Danish-based Axapta solution enabled the competent user to meet every individual client need.

It is high-precision analysis, systemic flexibility and speed that basically sums up their business model. With its well-timed launch in 2000, XAPT soon found itself ranked among the best.

However, company mergers and acquisitions are not uncommon in this sector either. Navision bought Axapta, which was in turn bought by Microsoft a year or so later. Microsoft also went on to purchase the Great Plains software company, thus XAPT’s three selected software ended up with the US software giant. Thus it is no surprise that, in the area of ERP systems, Microsoft’s most important partner in Hungary is Zoltán Schvarcz’s company.

The dynamically expanding XAPT, which went from a team of four in 2000 to an IT company with a staff of 100 in six or seven years, became an expert providing installation and support services for the Microsoft Dynamics range of systems. Their first major Hungarian clients included Diagon, Marso, Diego, Lindab, and Masterplast. They work for several Hungarian large and mid-sized corporate clients, including the Hungarian subsidiary of Caterpillar, Huntraco Zrt., where the switch from the company’s old software was implemented so skilfully that many Caterpillar dealerships took notice of this flexible product and as a result, they now sell their systems to many heavy machinery dealerships in the USA as well. They also deliver to Australia and Oceania, Vietnam, Jordan, Libya, Japan, and recently to Columbian machinery dealerships. Through a reference from Marso in Hungary, they also came to work for a large Canadian tire service network. Before the 2008 crisis, they met up with the Austrian New Frontier Group, who helped them through the crisis as a financial and professional investor, and enabled them to reach new markets by providing them with capital and references.

Currently, 80% of the sales of XAPT Llc. and its subsidiaries are destined for export, selling high added-value Hungarian software development, installation and support and they have a staff of over 400 employees. In their best years, they achieved a growth in revenues and EBITDA of around 30 to 35%, and even considered going public. However, the market has changed drastically: in the wake of the crisis, clients have been increasingly switching from software licences costing several tens of millions of forints to monthly-fee, pay-per-user schemes, necessitating a completely new funding model. In addition, partly new methods are required to serve and retain their 500 or so clients. Microsoft provides help for this, as XAPT belongs to a small circle of about a dozen international partner companies with which the transnational corporation collaborates. They have received the Global Independent Software Vendor (GISV) title from Microsoft as a financial recognition of their outstanding performance in customising and localising its ERP software. They are currently working on a new strategy, and are in advanced negotiations to bring in a new partner, though Schvarcz could not go into further detail for the moment.