A glorious past and a bright future - Hajdu Group - Bet site 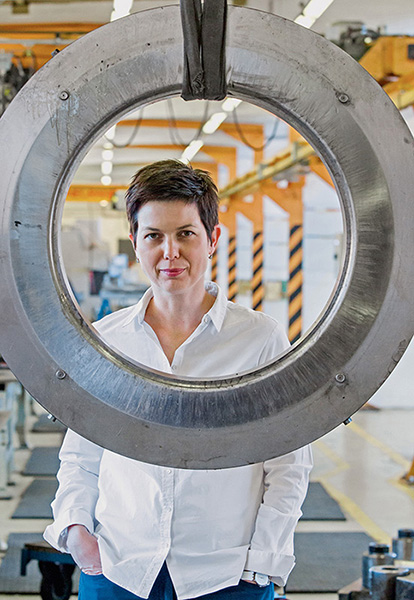 The Hajdu Group, with a reputation in Western Europe and a staff of over 700, seeks to stay on track for continued growth through continuous investments.

Founded in 1952, it began its career as a military manufacturer. Over the last 65 years, its plants have put out a wide variety of products, including shoe cleaning products, rechargeable batteries, and oil-filled radiators. However, it was their washing machines that gained them nationwide popularity. In the time of the shortage economy, customers typically had to wait for months to get the items they had ordered. Although the company continues to manufacture household appliances to this day, this is no longer the foundation of their future.

Currently, two divisions account for the majority of the company’s turnover: thermal products for the generation of heat and hot water, and machines and parts for the automotive industry. The latter were first included in their portfolio 15 years ago, back when their technical capacity was only being used at a rate of 50%. They began to expand their product range precisely to minimise idle time. Currently, they are at a point where their pressed metal parts are used in the vehicles of practically every automotive brand in Europe. This diversification was especially helpful during the crisis: as their Western European competitors were going bankrupt one after the other due to the recession, they picked up a lot of new orders.

Even so, competition is extremely fierce: steady growth requires not only quality and precision, but also good problem solving, a professional enterprise resource planning system, and specialised know-how. “And of course reliability, which has always been, and will continue to be, a given. For us, the fast delivery of parts for example is not an issue”, notes Anna Novotni Dede, CEO of Hajdu Autotechnika Zrt. The company offers its clients complex service packages. If a client has a design for a part, they can also produce the tool for making the required product, and maintain it throughout the production. As most of their competitors do not offer this type of services, this gives them a major competitive edge. The idea of putting up a new plant came up two or three years ago. The soon-to-be completed facility is expected to double their revenues from the automotive industry over the next five to six years.

At the moment, the company produces almost exclusively for export: their biggest orders come from the French parts manufacturer Faurecia, but their clients also include Remy and Daimler.

Their technical support can be best delivered on a Tier 2 level, so they are mostly active on this platform. Competition is extremely fierce, and they have to meet the highest quality standards. Traditionally, export has been extremely important also for the group’s other member, Hajdu Hajdúsági Ipari Zrt., which makes hot water tanks and heaters. Because of its past, the company is in a unique position: back in the socialist era, they delivered products that could also be sold in the West to the capitalist countries in exchange for hard currency. For this reason, Hajdu’s products are well known in Western Europe. In the East, however, they had to start from scratch about ten years ago. This was not a problem though – for example, they now have their own subsidiary in Russia. Meanwhile, another issue arose: needs in terms of water heating have changed substantially in recent years. Environmentally-friendly solutions and energy conservation are increasingly seen as basic requirements. It was for this reason that the company spent HUF 400 million over the last few years on product development. One of their innovations is a heat recovery ventilation system which is so thin that it can be integrated into a windowsill. At any rate, there has been a stream of investments at the company. For example, over the last few years, it spent HUF 520 million on updating its infrastructure, including its entire electrical and drinking water supply systems.

The operation of their industrial park and the supply of energy for their site is provided by Hajdu Infrastruktúra Zrt. The three companies within the group work together as a holding for the sake of efficiency. Each of them performs its core activities autonomously, but coordinate their operations where practicable, such as in the area of economic, HR, or PR.

With regards to the future, they plan to move into products with higher added value the and assembly within the automotive sector.