A company in the hands of employees - Innomed Ltd. - Bet site 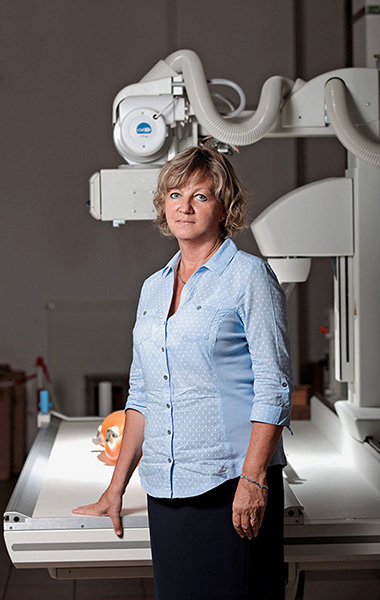 Innomed Medical, founded nearly thirty years ago, is continuously developing. The Budapest headquarters of the internationally-focused company provides unique services to both business partners and staff.

Innomed Medical Zrt. is owned exclusively by Hungarian private individuals. The history of the company dates back to 1989, when Medicor was disbanded and the apartment and garage of one of the majority owners was first used to develop and produce cardiology equipment with a staff of 11. Later on they had an office on Visegrádi utca, then moved to a villa with a floor space of 5,300 square metres on József Szabó utca which was refurbished in 2004 and 2011 at a cost of nearly half a billion forints. This is where the management, the commercial department and the nearly 40 development engineers work. The company, which today has a staff of 150 and a plant in Esztergom with a floor space of 4,000 square metres, has been built around the manufacturing, distribution and sale of 1/3 channel portable ECG devices.

As CEO Erika Dévényi put it, “We are lucky to be able to sell our own products across the world. We research, develop and manufacture them in our own factories. We track everything as one big team”. The Esztergom plant produces thousands of the twenty types of devices annually, and has a stock worth one billion forints. The company took out a current asset loan to be able to finance the parts purchased from nearly 200, mostly Hungarian, suppliers. Development being a major asset for them, they spend half a billion forints each year on it not counting grants. “R&D grants are a great help, because we only have to come up with 40-50% of the total amount”, adds Dévényi. Their latest development, a diagnostic device using digital tomosynthesis (DTS) with low radiation dose, high quality imaging and section images won them the 2016 Industrial Innovation Award of the Ministry for National Economy. The device, worth 60-70 million forints, is also ideal for the monitoring of tumours and the examination of children. Considering that an innovation often requires five to ten years of work, the fact that his device only took three years to develop is a tremendous achievement.

The company currently has 23 owners. The majority are over 60 and are either former or current staff. According to the head of the company, the majority owner Endre Dévai was a generous leader who rewarded high-performing and loyal staff with shares in the company. Employees and members of their family can also enjoy a special treat and use the swimming pool, sauna and jacuzzi within the house. The new generation of employees now find the company through word of mouth. Older colleagues, who make up about half of the staff, help the younger staff by imparting their experience and knowledge. The CEO, who transferred from Swiss company Schiller in 2012, says she learns something new every day, since it is not easy to work together with developers and the production department.

While prior to 2012 the key customers of Innomed mostly came from the Commonwealth of Independent States, today, the company supplies 110 countries across the world, including Indonesia and China, through its dealers. This change in strategy first and foremost meant developing their current sales approach. Although 70% of their sales revenue comes from international markets, last year they also delivered to a number of Hungarian hospitals under a tender. According to the CEO, their greatest strength lies in their adaptability - they are quick to respond, take decisions and provide feedback. She sees this adaptability as well as the uniqueness of a development as the keys to innovation today. “I’m proud of Hungarian knowledge capital and our tremendously talented colleagues. It feels good to be able to make equipment to help people heal or find the right therapy”, she said.

Dévényi always has short and medium-term plans. As she says, it’s not easy to plan for the long term at the moment, and this is the job of the owners. “Our innovations put us in a good position with a great deal of upward potential”, she said. Their budgeted sales revenue for this year is 2.7 billion forints and they have a good chance of reaching it, given that they already made over one billion forints in revenue in the first half of the year, when turnover in the medical devices sector is normally lower. The company shows its appreciation not only to its staff but also to its customers by putting them up during partner meetings in the seven-room minihotel located in the building. In addition to a conference room that can sit 250 people, they have an impressive great hall with restored carved wood panelling and a capacity of 13.