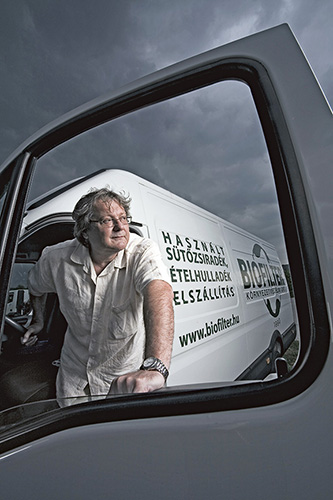 Over the course of 25 years, this family-owned business has developed a system for the collection of cooking oil and food waste which is considered unique within europe.

Biofilter Zrt. is probably one of Hungary’s oldest family-owned environmental companies. It established a considerable network in the years following the system change and presently collects organic restaurant waste from as many as 6,000 locations. As György Deák, the CEO, explains, the company – using its fleet of 80 vehicles – collects at least 2,000 tons of cooking oil and food waste per month from every corner of the country. Another company within the group, Greenflow Zrt., acquired under the name LTV Trans 5 years ago, carries out a similar activity with 20 cars, and deals with the cleaning of grease and oil traps to protect the environment. ‘Since the foundation of the company roughly a quarter of a century ago, we have explored a number of fields, but ultimately we have stayed with the one we excel at: as a waste management company we are dedicated to reducing CO2 emissions,’ sums up the CEO.

The company has always managed to keep one step ahead of other market players by constantly trying new ideas, maybe that is why they have been able to retain their leading position for such a long time. There is no better proof of that than that Biofilter Zrt. has a share of 70-80 percent in domestic hot food waste collection. Their processing plants use self-developed technologies, and the operation of the company’s fleet has been reliant upon GPS tracking for 10-12 years. Now they strive to further rationalise their collection and production processes by combining big data management and applied mathematics. The company which employs 150 people, continues to focus on productivity, underlines the head of the company.

They have a fully paperless office using e-credentials, e-invoices and electronic document management, which allows the company to comply with the rigorous food safety and regulatory requirements, while ensuring more transparency in daily operations. Making collection points paperless has yet to come, as this requires that partners and supervisory bodies are all engaged in the process of digitalisation. The company’s efforts are ultimately aided by the hospitality sector’s increasing awareness of sustainability.

They have ventured into international expansion, but have found that regional markets show distinctly unique patterns. They used to have subsidiaries in Croatia, Greece and Romania, but local entrepreneurs always seemed to stay slightly ahead of the company. In Serbia and Slovenia, culinary and hospitality practices are different, The trade there do not use enough cooking oil for it to be worth collecting in an organised fashion. However, Biofilter’s activity is considered unique within the European HORECA (hotels, restaurants and cafés) sector. No wonder that the company’s employees are regularly invited to hold lectures for European and Hungarian professional organisations and are often engaged as advisors, too.

One question which can be asked is why it is only the hospitality industry where used cooking oil is worth collecting? The reason is that the larger deep fryers used in hot food kitchens produce waste oil in large enough volumes to make this activity economically feasible. Five years ago, MOL’s flagship filling stations started to promote the collection of domestic waste oil, which is a brilliant feat, however this activity which has a market share of only 5-6 percent barely contributes to the total volume today, says Biofilter’s CEO. On top of that, household use of cooking oil has noticeably taken back. People cook at home less often, and tend to order more from food delivery companies. Also, deep fryers are less popular today than they used to be 10-15 years ago.

Nowadays, the company’s growth is largely due to the fact that those who choose to eat out are more and more demanding in terms of quality. Chefs no longer tend to save through the multiple re-use of cooking oil because they know customers will not return if food tastes bad or if the restaurant smells of oil. György Deák therefore expects that the quantity of waste oil to be collected could increase by 15-20 percent in 2016, which means that the company’s sales revenue should also grow.