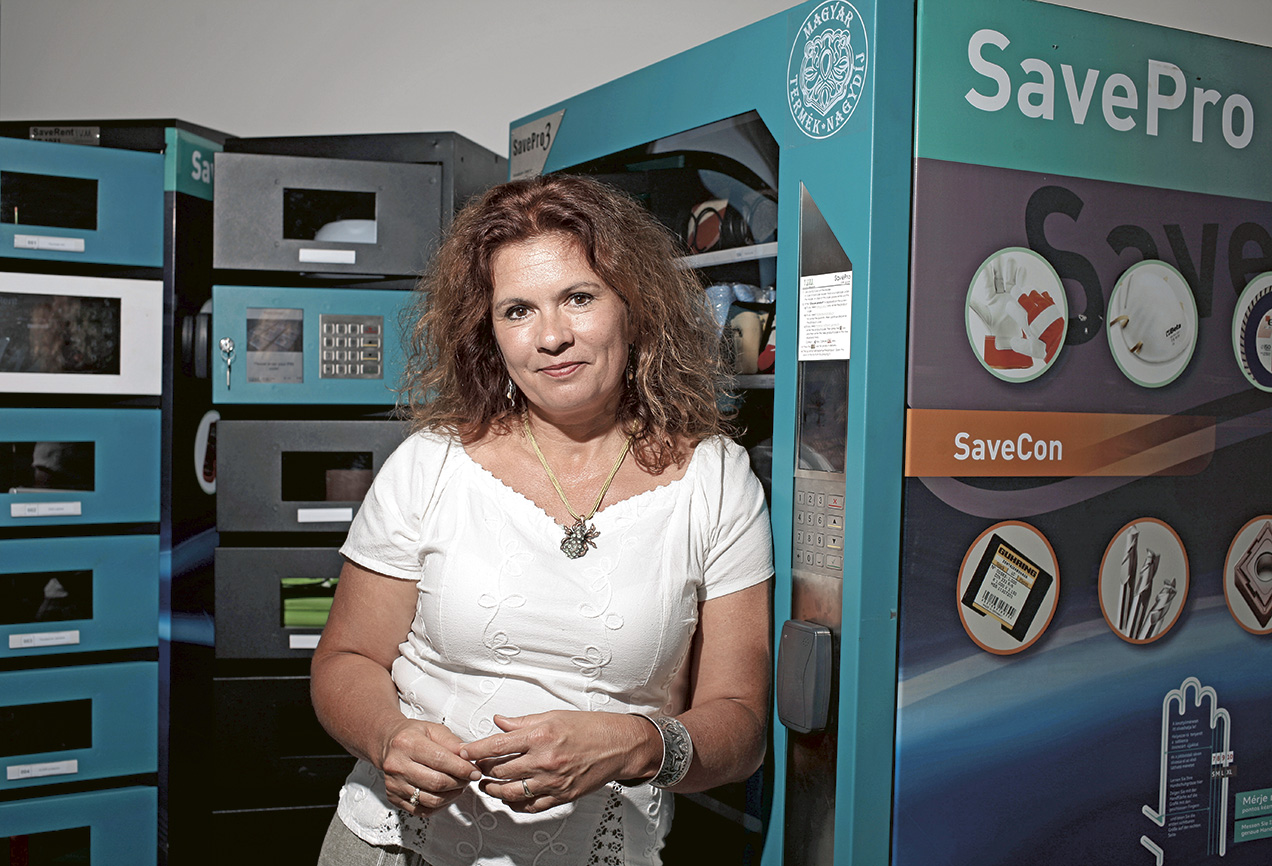 With its headcount of 40 people, the Székesfehérvár-based IVM Zrt. Receives orders from nearly all countries of Europe. The vending machines developed by the company sell no coke, nor saltsticks, but instead industrial equipment (gloves and tools) to be used by the workers.

Prominent multinational companies on the Hungarian market – such as Audi, GE, Opel, LuK, Sapa, etc. – all belong to the customers of IVM. What they have found out is that a cost saving of 20-25 percent may be achieved when distributing work equipment in a documented fashion, by means of card-based identiﬁcation. It is thereby possible to predeﬁne and keep proper track of what equipment is made available to an employee over a speciﬁc period of time, including distribution time and source of the particular tool. In this way, wasteful use – which is typical of dispensing stocks from a conventional warehouse – is completely eliminated.

It was back in the middle of the last decade when co-founder Emese Várnagy – who was then leading a company engaged in the distribution of personal protective equipment – was contacted by her client from Alcoa with the request for a glove-dispensing unit. It was not until her client’s request that the businesswoman heard of such a system, but she picked upon the idea. They managed to get in touch with a Canadian distributor which delivered the ﬁrst machines. The business soon got into high gear: ﬁrst the company penetrated the Hungarian market, and shortly thereafter they got a foothold abroad too. An interesting observation of the company is that the number of orders is comparably higher when the economy is suffering from the chilly winds of recession: when surveying various cost-cutting measures, managers are inclined to swiftly recognise the enormous savings potential that lies in the management of working tools.

In the meantime, the Canadian business partner went out of business, but life goes on. The story caught the attention of Primus Capital Zrt., a venture capital ﬁrm which became involved in the enterprise as an investor in 2010. At the same time, IVM Zrt. was established and embarked upon the development of its own technology, supplying the market with industrial vending machines. They survived a supply disruption in the ﬁrst couple of months, and launched their selfdeveloped products to the market in the spring of 2011. The frame of the vending machines is produced by Hungarian suppliers based on IVM’s know-how. All the rest, including in particular the required software is developed by IVM under its own right. This means that the product is now 100 percent Hungarian. The company’s sales revenue will exceed one billion forints this year. International market trends suggest that the business should be able to maintain an annual growth of 30 percent in the coming years.