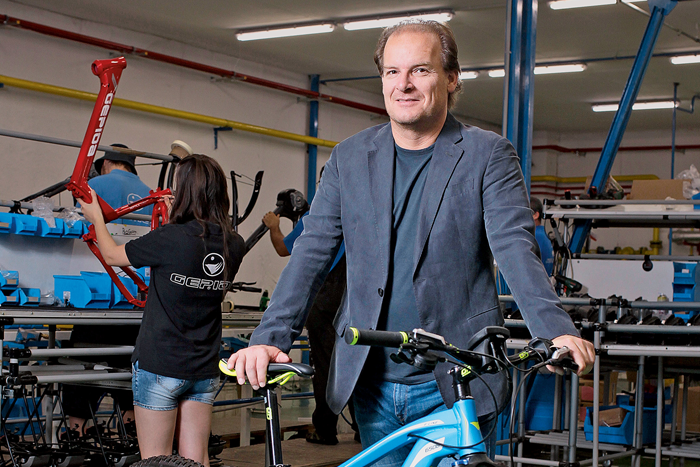 Berkes György had the confidence of a visionary when he built up his bicycle business from scratch, which has made Gepida into a leading e-bike brand. Though electric transport is a popular topic nowadays, it was not like this in 2000, when the company made its first e-bicycle. They had to wait until the market grew to embrace this new direction, but it was worth the wait.

E-bikes are, without any doubt, the most popular products of Gepida, half of the products they sell and 80% of their revenues are from this category. Hungary is now catching up the West in terms of e-bikes – which use electric assistance and thus need less energy – and it is doing so very quickly: for years, Gepida has been doubling its sales every year.

The founder and company director tried bicycle sales at quite a young age, around the time he graduated from secondary school. Perhaps out of a spirit of adventure, he and a friend started to “import” bicycles and parts from Vienna at the end of the 1980s, bringing them across the border for a Hungarian bike shop. After the political changes in the early 1990s, he founded his own business under his own name, because he liked this industry and the product and saw the opportunity it offered. The company developed organically. They started in a small assembly workshop, sometimes storing inventory at home, then they grew gradually. Today, Gepida is a market-leading Hungarian manufacturer in the upper middle category, confidently conquering international markets with its e-bikes. But let’s get back to the beginning. In the first half of the 1990s, there was a dearth of good quality imported bikes in Hungary, but there was a demand for them. In the first year, they imported full-fledged bikes from Italy, but they soon realised that importing the parts separately and assembling the bikes in Hungary was more profitable. This had many advantages: the then-applicable tariff on fully assembled bicycles was 20%, while that on parts was only 10%. In addition, transporting the parts was much easier than transporting whole bicycles, and assembly was cheaper in Hungary. This meant that they could offer bicycles at a competitive price already in the first year.

They were already building the business consciously. They first wanted to get a market share, so they sold bikes with a narrower price margin and in greater quantities to the supermarket chains that were opening up at the time and sold the products under their own brand. As the price was the only thing that mattered in this industry and because price competition would be dangerous, says György Berkes, they changed their strategy after a few years and stopped making standard bicycles. They started to focus on international markets and strengthened the Gepida brand, which Olimpia bought back in 1996. This move proved to be a good decision. Later they even changed their name to Gepida, because the Olimpia name raised problems, as it is trademarked in international markets.

Export sales have been dominant ever since: they export 85% of the 35,000 to 40,000 bicycles that they manufacture annually. With exports to more than 30 countries all over the world, they have customers in New Zealand and the US, but their focus has remained Europe. Here, the key countries are Germany, Austria, and Switzerland, but they are also strong in Belgium, England, and Italy.

Leaving the price competition, György Berkes searched for a new strategy for the company, and found it: in the early 2000s, he decided to make e-bikes. The market however, was not yet ready for such a great jump in quality. Then came the crisis, so they had to wait a good ten years for the breakthrough. When the demand for e-bikes started to boom, they were ready. As with conventional bikes, they did not target the lower categories in this case either.

Gepida is proud that they keep everything in their own hands: design, wheel-building, coating, assembly, and packaging are all done in Hungary. Today, while they have more than 110 parts suppliers, from Japan to Europe to the United States, they source the heart of e-bikes – the electric drive and battery – from Hungary, from one of the largest automotive suppliers. The e-bike segment keeps opening new categories on the market. This is well illustrated by certain Swiss towns, where one can only drive e-vehicles, meaning that letter-carriers cannot drive scooters, which are likely to get replaced by e-cargo bicycles. Hungary has not yet reached this stage, as people still have to become familiar with the e-bike concept, which might seem unusual at fist. It is for this reason that Gepida is launching a countrywide roadshow. They will be taking their entire range to twenty cities to let people try the products. In Hungary, they currently sell the most electric bikes in Budapest, which corresponds to 80% of their sales. This is partly because the potential demand for e-bikes, with prices starting at HUF 600,000, is concentrated in the capital city. The latest market trend is that the bike should not look like an e-bike, but it should resemble a normal bicycle as much as possible. Accordingly, the battery and even the Bowden cables are integrated into the frame to result in an apparently cable- and battery-free, clean-looking e-bike.

The labour shortage hitting the entire economy is a serious issue for Gepida as well, which has 110 employees. The labour shortage was so serious that they eventually invested in an electrostatic painting robot, which can do the work of two workers in each shift. How this innovative technology works is that the frame that is being coated is charged in a closed electrostatic system and essentially sucks the coating onto itself. This investment, which was initially a contingency solution, eventually proved to be a success, because it allowed for the most economical, most efficient production – practically without any waste.

György Berkes thinks that manufacturing will shift towards robotisation in the future. The big question will be the safe cooperation between humans and robots along the production line. E-bikes seem to have conquered the last untouched category of conventional bikes: electrically assisted e-road bicycles have appeared among road bikes as well. Although it is quite a challenge in this case to hide the battery in the thin frame, this is what drives development towards smaller and more efficient energy sources.

As the managing director sees it, years of hard work and conscious branding have led them to being a serious player in the middle and upper categories. If we compare it to the car industry, Gepida is the Audi of bicycles. Their goal is not only to stay there, but to move up to higher levels and to take their place in the booming e-bike market, for which they envision a bright future.